“I got five words out before Justice Scalia interrupted me.”

That’s how Erwin Chemerinsky, now the dean of Berkeley Law School, recalls his first U.S. Supreme Court argument back in 2002. He was referring, of course, to the late Justice Antonin Scalia, the larger-than-life jurist known for putting advocates through the wringer at oral arguments over his three-decade high court tenure.

Scalia’s aggressive approach, aided by increasingly inquisitive colleagues, gave rise to a notoriously “hot bench” that asked so many questions, it sometimes left lawyers little room to get words in edgewise.

Reflecting on his Supreme Court debut led Chemerinsky to embrace the court’s new guidance giving advocates two uninterrupted minutes to speak before the justices jump in and start tearing their arguments apart.

As with many of the cloistered institution’s behind-the-scenes moves, the court didn’t explain what prompted the change, which justices wanted it, or really anything else about it. The Supreme Court declined to comment about how the rule was going for this story.

On the whole, the new rule seems to have been well-received by advocates. Bloomberg Law spoke to a dozen lawyers who’ve argued under the new rule so far this term.

But some have reservations, including Sidley Austin’s Carter Phillips, who’s been arguing at the Supreme Court since before Scalia’s 1986 appointment. He says he’s “not a big fan of the two minutes” because it’s time that could be better used responding to the justices’ concerns. 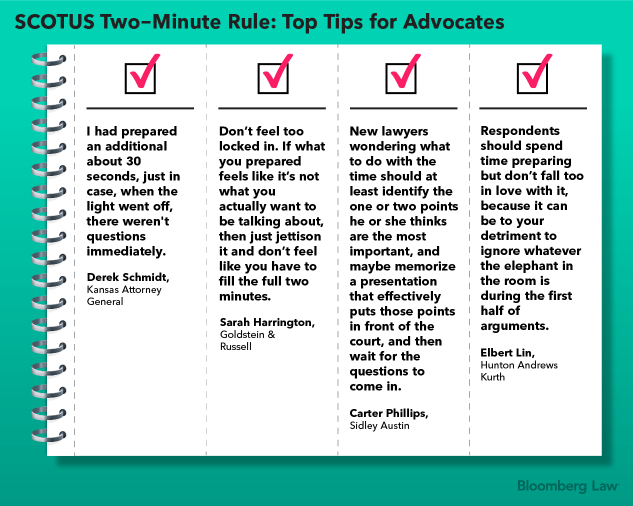 The unexpected new guidance announced Oct. 3, just before the beginning of the term, says that the justices generally will not question counsel during the first two minutes of argument.

A common refrain from advocates who spoke to Bloomberg Law is that the new guidance gives them the chance to frame their arguments.

It provides an opportunity to shape the case, said Kirkland & Ellis partner Paul Clement, a former U.S. solicitor general who’s on the verge of being one of just a handful of lawyers to argue 100 or more Supreme Court cases.

Clement said using the uninterrupted time isn’t “a one size fits all” approach for every case.

Hunton Andrews Kurth’s Elbert Lin, who argued a significant environmental case in November, said the uninterrupted time let him get key points out “right at the beginning, framed in the way I wanted to frame them, rather than trying to kind of shoehorn them in.”

Under the old regime, there was a risk that some litigants would be fazed by getting interrupted so quickly into the argument, said Jenner & Block’s Adam Unikowsky, who argued his eighth Supreme Court case in November. So the new rule could improve the overall quality of argument, he said.

Quinn Emanuel Urquhart & Sullivan’s Derek Shaffer, added that, although it may not be a primary concern for the justices, the new rule can provide value to clients and to the broader public, because it “adds to the perception that whoever is before the court can have their day in court.”

Some advocates, veterans in particular, seemed skeptical of the new rule, because they suspect that they are most effective when responding to a question.

“When you’re being asked a question and answering it, you know that at least one member of the court is paying attention to what’s going on,” said Phillips, who argued his 88th high court case in a maritime dispute in November. “I like to think they listen to me when I’m standing there just talking at them, but I’m never a hundred percent certain.”

“For me, my least favorite part of oral argument is when I’m just talking, because I feel like I’m not getting anything done,” said the former assistant to the U.S. solicitor general. “If I’m not responding to what they’re asking, I feel like I’m not moving the ball.”

‘Do Them a Favor’

Some of the justices have expressed misgivings with the new rule—either through actions or words.

Justice Sonia Sotomayor, a notoriously early interrogator, has already jumped in to ask questions before the two minutes is complete. She interrupted McDermott Will & Emery’s Paul Hughes shortly into his first argument of the term in Kansas v. Garcia, a case at the intersection of criminal law and immigration.

“I was a little surprised,” Hughes recalled with a laugh. “I did have two minutes of material I was hoping to explain to the court,” he said.

Hughes said he was unsure what to do after the interruption. “So I looked to the Chief Justice to get a cue as to how to proceed, and he, I think, saw me look to him and advised me to continue and to return to the question after the time has lapsed.”

There have been other early interruptions since then, including in the very next argument. That time, Sotomayor realized her mistake without the Chief having to jump in.

And Justice Elena Kagan’s public comments in November suggest that she isn’t a fan of the new setup.

She said she’s been “watching these people try to fill up two minutes of time without being interrupted, and thinking, we should just do them a favor and interrupt them.”

Several lawyers stressed that they don’t need to use all of the time.

Harrington noted that the Clerk of the Supreme Court, Scott Harris, “gives a talk to the advocates before they go on, and he said people should feel free to invite questions, you don’t have to use the full two minutes.”

Boies Schiller Flexner’s Scott Gant, who argued a debt collection case in October, added that advocates should “think about what it is that you absolutely want to get out, because there’s no assurance after the two minutes that you will get to do anything other than answer questions.”

Chief Justice John Roberts appears comfortable with the prospect of waiver, as shown in a recent argument.

In a patent argument Dec. 9, Daniel Geyser, arguing as respondent, began by saying that he respectfully waived his two minutes.

He then started to make a point, shortly after which Roberts said, to laughter, “Well, if you’re going to waive your two minutes, I’m not going to sit back,” and then questioned Geyser.

Lawyers point out that the new regime is different for petitioners—who kick off the arguments—and respondents, who argue after the justices have already asked some questions and thus have given hints as to their feelings about the case.

Hughes observed that the new rule is “kind of an experiment,” one where “the court will determine whether or not advocates use those two minutes in a way that helps the court better adjudicate the case, or if the court thinks that” it would be better served by immediately getting into questions.

“So I do suppose that time will tell.”