Lawyers’ wages grew slower than inflation from 2017 to 2018, according to data in the American Bar Association’s first annual profile of the legal profession.

The average lawyer’s salary rose 1.6%, which is a little lower than the 2.1% rate of inflation for the same period.

The ABA released the 99-page report on Aug. 10 at its annual meeting in San Francisco. Its goal is “to provide authoritative data for those involved in and covering the legal profession, including lawyers, academics and journalists.” The ABA intends to update it annually.

The ABA has introduced a number of new measures this year in the hopes of attracting new members, including a revamp of its website, logo. The group has seen a slide in membership over the past several years.

The report’s data comes from within the ABA as well as from a “variety of authoritative sources” from the federal government and nonprofit groups. The U.S. Bureau of Labor Statistics provided much of the salary data, for example.

According to BLS, lawyer salaries almost doubled from 1998 to 2018 but during this time, the cost of living rose 53%. Salary information includes only wages, and doesn’t count profits for law firm partners and shareholders, the report says. 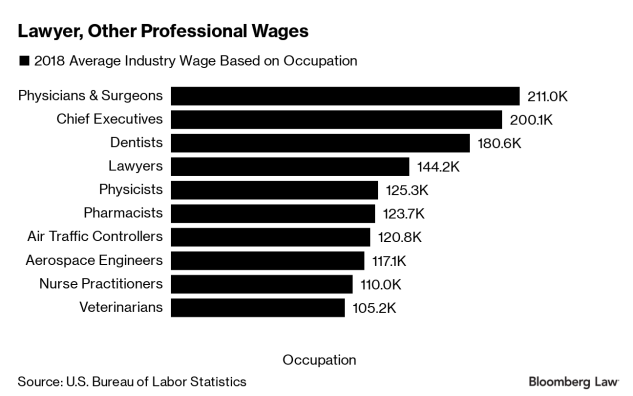 Lawyer well-being is a topic that has been in the spotlight because of the pervasiveness of stress, anxiety, and substance abuse in the profession.

“Recent studies show that lawyers struggle with these problems at levels substantially higher than the general population and other highly educated professionals,” the ABA report said.

A number of big law firms like Kirkland & Ellis, Reed Smith, and Clifford Chance have established well-being programs to help attorneys with these issues, which can have “major consequences,” the ABA report said.

Twenty-five to 30% of lawyers facing disciplinary charges suffer from some type of addiction or mental illness, it said.

Another area that’s also beginning to make advances is legal technology. Lawyers are known for being risk-averse, and the profession has been slower than many to embrace legal tech.

According to the ABA 2018 Legal Technology Survey Report, 90% of lawyers surveyed said they use free online resources to conduct legal research. But 44% said they still use print materials “regularly” for legal research.

Ten percent of lawyers say their firms use artificial intelligence-based technology tools, and 36% think AI tools will become mainstream in the profession in three to five years.

Other categories the report examines include demographics, legal education, diversity of federal judges, pro bono, women in the legal profession, and attorney discipline.

Additional facts included in the report: