Alex Twinem’s second-year spring at Stanford Law School looked a bit different than that of her peers.

Twinem, rather than cramming for exams, was hard at work on a case that ultimately resulted in a landmark U.S. Supreme Court decision: Obergefell v. Hodges. The high court’s 5-4 ruling in June 2015 legalized same-sex marriage across the country, capping a decades-long fight by LGBTQ Americans for equal representation under the law.

Twinem helped write the reply brief for a group of 12 people from Kentucky at the heart of the lawsuit as a member of Stanford’s Supreme Court Litigation Clinic. The clinic, founded in 2004 by appellate powerhouses Pamela Karlan and Jeffrey Fisher, allows students to work on real-life Supreme Court cases while still in law school.

These clinics, which have since cropped up at top law schools across the country, provide quality representation to groups who can least afford it and act as a pipeline to elite appellate work, including at the U.S. Supreme Court.

Clinic experiences like this were rare in law schools until relatively recently, said Michael Kimberly, a partner at McDermott Will & Emery in Washington, who graduated from Yale Law School in 2008. He is now one of the Yale clinic’s five faculty members.

“Supreme Court clinics give us an opportunity to mentor students,” Kimberly said. “To help support the next generation of appellate lawyers.”

Stanford’s clinic, now 15 years old, is among about a dozen nationwide that regularly see students working on cases heard by the nation’s highest court.

These clinics offer a glimpse into the court that hears a few dozen cases per year. The Supreme Court chooses the vast majority of the cases it’s going to hear, meaning lawyers have to file petitions for writ of certiorari, or requests for review of a decision.

“Getting into the certiorari part of the courts’ practice is actually one of the most revealing and educational things we can do in the short time we have,” said Tejinder Singh, a partner at D.C.-area boutique Goldstein & Russell and an instructor at Harvard Law School’s clinic. “So that’s why we tend to focus on it.”

Students in some Supreme Court clinics, in addition to working on cert petitions, also work on merits briefs—briefs on the legal arguments in the case.

Though the size of clinics vary, most have between six and 12 students. Some run on yearlong schedules, others on semester-long ones. Harvard Law School’s clinic is in January term, which typically runs for three or three-and-a-half weeks. 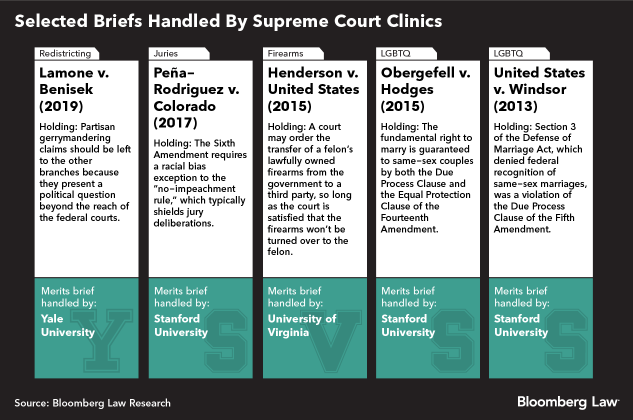 Something Not All Schools Teach

Besides gaining a familiarity with the workings of the Supreme Court—its schedule, what types of cases it agrees to hear, how to craft a cogent argument for the justices—students gain technical skills easily transferable across the legal profession, Stanford’s Karlan said.

“Students say they’ve become writers, and that they now understand how to edit their work and other people’s work,” Karlan said. “The collegial nature of the clinic teaches them how to work as part of a team, which is something law school doesn’t always spend a lot of time on.”

Students at Stanford’s clinic are split into small groups and assigned different cases, as is true at others. They tackle drafts, edits, and research as a team.

Oral advocacy at the Supreme Court is left to the clinic instructors or to their co-counsel on the case at hand, though students can work on briefs and assist in preparing for arguments.

Cody Akins, who will be a third-year student at the University of Texas School of Law in the fall, worked on Parker Drilling v. Newton. The case questions whether federal or state law governed on the Outer Continental Shelf.

“I was an engineer before law school, and I thought patent law was what I wanted to do,” Akins said. “I’m still interested in that, but being in the clinic has really opened my eyes to appellate work.”

Liza Starr, who will be a third-year student at Stanford Law School in the fall, worked on a merits brief in Ramos v. Louisiana. The case questions whether the 14th Amendment fully incorporates the Sixth Amendment guarantee of a unanimous verdict and will be heard by the Supreme Court in October.

“It’s humbling to be working with such talented Supreme Court advocates and peers who are, frankly, going to go on to do incredible things,” Starr said. “And I certainly didn’t dream that I would have worked on as many Supreme Court cases I have at this stage in my career.”

For some students, participation in the Supreme Court clinic is what solidifies their existing desire to enter the appellate sector. For others, it’s a way of catapulting into their legal careers.

Working with instructors from top law firms can also help students get their foot in the door.

“If you decide that you want to work in their firm, you start with a relationship already formed,” said Paul Hughes, co-chair of the Supreme Court and appellate practice group at McDermott Will & Emery in Washington and an instructor at Yale’s clinic. “It can make for better experiences as a junior lawyer at a large firm.”

Now about a dozen years into their careers, early clinic participants are household names within the appellate sphere.

Adam Unikowsky, who graduated from Harvard Law School in 2007, is now a partner at Jenner & Block who’s won eight Supreme Court cases as lead counsel since 2016. Scott Keller, a Texas alum, is chair of the Supreme Court and constitutional law practice at Baker Botts and was formerly the former solicitor general of Texas.

“It’s one thing to study constitutional law and the Supreme Court in the abstract in a classroom, and it’s another to then actually be working on actual Supreme Court briefs and cases,” Keller said. “It was really the capstone experience of my legal education.”

Alumni from top Supreme Court clinics, in addition to heading appellate practices in private firms, have also gone on to work as assistants to the U.S. solicitor general. That office, which argues cases on behalf of the government, has no more than two dozen lawyers at any time and acts as a pipeline for a career as a Supreme Court advocate in private practice.

In the 2018-2019 term, several advocates who participated in Supreme Court clinics as students argued at the high court as assistants to the U.S. solicitor general. They include Erica Ross, Rachel Kovner, and Eric Feigin from Stanford; Frederick Liu from Yale; and Jonathan Ellis from the University of Pennsylvania.
Image 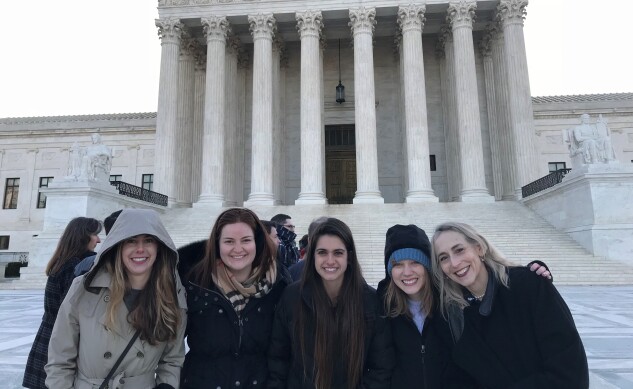 Fifteen years ago, some clients without sizable budgets struggled to find quality representation at the Supreme Court, said Singh, the Goldstein & Russell partner.

“There was a real gap in the marketplace for some of these pro bono-type cases that big law firms weren’t really going after,” he said. “Clinics like Harvard’s were important to ensure that clients who couldn’t afford top-notch Supreme Court representation were still able to get it.”

Today, though, Supreme Court work is highly coveted. Many elite firms have established appellate groups, beefing up their rosters with top law clerks and alumni from the U.S. solicitor general’s office.

Lisa Eskow, co-director of the Supreme Court Clinic at the University of Texas School of Law, said an increased emphasis on experiential learning in law schools—for example, by way of clinics—is a “terrific development” for the profession.

“Students now graduate with practical skills they can immediately put to work,” Eskow said. “Being able to work on actual cases is the type of experience that you can’t get anywhere else, except for working over the summer.”

Supreme Court clinics, she said, are unique in particular because most associates don’t get the opportunity to work on high-level appellate cases, let alone Supreme Court ones.

And as work for Supreme Court cases grows more fierce, clinics have opened across the country.

The University of Pennsylvania Law School is launching its appellate advocacy clinic this fall, which will focus on both the U.S. Supreme Court and lower appellate courts.

Twinem, the Stanford alumna, is now a fellow at the public-interest appellate boutique Gupta Wessler. She hopes Supreme Court clinics act as an additional pathway to high-level appellate work and not as a prerequisite.

“I always worry about [clinics] becoming a bottleneck instead of an additional avenue of access,” Twinem said.

Hughes said Supreme Court clinics, in addition to serving as a pathway for prestigious clerkships and Big Law appellate work, are raising the bar for “quality lawyering.”

Without Yale’s clinic, Hughes said he might not be where is today.

“I had not previously understood what it meant to be an appellate litigator,” he said. “Yale’s Supreme Court clinic was the single most impactful experience in law school, and it set the trajectory of my career.”

(Clarifies the parties represented by Twinem and the Stanford clinic in third paragraph.)