The Senate Judiciary Committee hearings for Donald Trump’s second nominee to the high court, Judge Brett Kavanaugh, got off to a rocky start this morning with protests and Democratic senators’ calls for the hearing to be delayed.

The nominee, a judge on the U.S. Court of Appeals for the D.C. Circuit, said the court “must never, never be viewed as a partisan institution,” as he closed out the first day of hearings.

“The justices on the Supreme Court do not sit on opposite sides of an aisle,” Kavanaugh told the committee. “They do not caucus in separate rooms. If confirmed to the Supreme Court, I would be part of a team of nine, committed to deciding cases according to the Constitution and laws of the United States.” 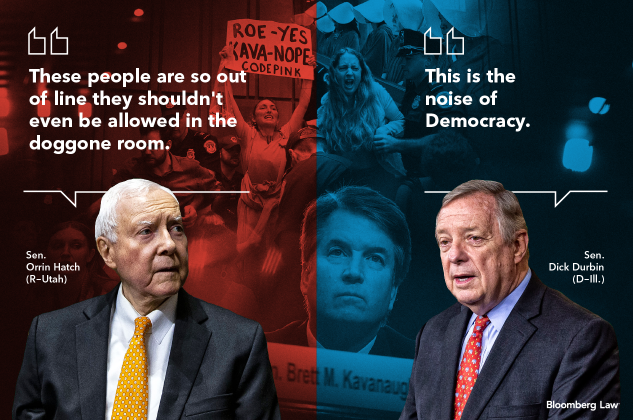 The advocacy organization Women’s March said that over 30 women had been arrested for protesting.

Linda Sarsour, a board member and co-founder of Women’s March, said today that she “absolutely” expects the protests to continue throughout the rest of the hearings.

The advocacy group, which focuses on issues important to women, including reproductive, civil, and immigrant rights, said in a statement that “hundreds of women from across the country are still in line waiting to access the Kavanaugh hearings—and we will not stop.”

Sarsour also told Bloomberg Law that arrested protesters could face a variety of charges, but that “anybody that gets arrested has legal representation and legal support,” including lawyers and legal observers from groups such as The Center for Popular Democracy, the National Lawyers Guild, and the Council on American-Islamic Relations.

“These people are so out of line they shouldn’t even be allowed in the doggone room,” Sen. Orrin Hatch (R-Utah) said.

The protesters even interrupted Democratic Sen. Pat Leahy (Vt.), who admonished the protesters and he didn’t “care whose side they’re on.”

The shouts were juxtaposed with silent protesters dressed as oppressed women from the Handmaid’s Tale series, who appeared outside the hearing room before the senators began.

The popular show on Hulu is based on the novel by Margaret Atwood and depicts a dystopian future where women are subjugated and forced to bear children against their will. 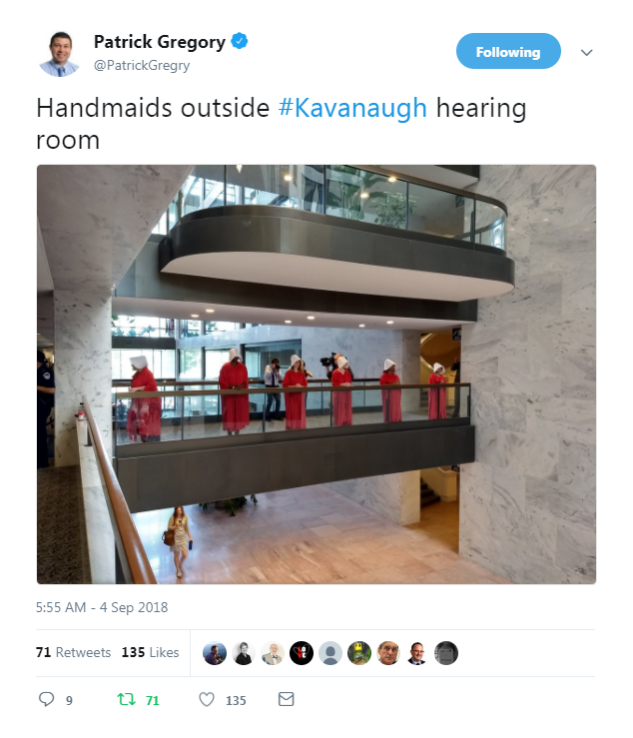 Kavanaugh’s family, including his two school-aged daughters, were in the hearing room during the protests. They were ushered out of the hearing room early in the proceedings and returned later.

Sen. Dick Durbin (D-Ill.) said he was sorry Kavanaugh’s girls were in the room to witness the attacks. “Hopefully you can explain it to them one day,” Durbin said.

Democrats including potential presidential hopeful Kamala Harris (D-Calif.) tried to suspend the hearing from its very start, citing the release of 42,000 documents on the eve of the hearing from Kavanaugh’s time at the George W. Bush White House, which Democrats said they couldn’t review in time.

Democrats, including Sens. Amy Klobuchar (Minn.) and Sheldon Whitehouse (D-R.I.), said no court would allow a hearing to proceed when a party hadn’t had a chance to review so many documents.

Senate Judiciary Committee Chairman Chuck Grassley (R-Iowa) denied Democrats’ requests for a vote on motions to suspend or adjourn the hearing. Sen. Richard Blumenthal (D-Conn.) warned that the process would be “tainted forever” by the refusal. 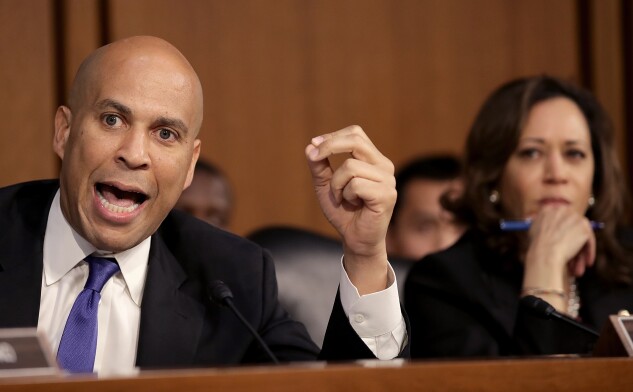 Both Democrats and Republicans said the amount of documents released related to Kavanaugh was unprecedented.

Democrats complained that they had only about 10 percent of the relevant documents, such as those related to Kavanaugh’s time at the White House, and that it would be unprecedented to vote based on so little of a nominee’s record.

“We wouldn’t hire an intern” without 90 percent of their resume, said another possible Democratic presidential hopeful, Cory Booker of New Jersey.

Republicans argued that the amount of Kavanaugh documents released was more than those for the past five Supreme Court nominees combined.

Sen. Sheldon Whitehouse (D-RI) proved to be one of the toughest questioners during now-Justice Neil M. Gorsuch’s confirmation hearings last year. And his opening statement this morning suggests he’s not letting up on Kavanaugh.

Whitehouse previewed a “highlights reel” of 5-4 Supreme Court decisions where conservatives (whom Whitehouse called the “Roberts 5”) sided with “big Republican issues” over the votes of the court’s more liberal justices. He pointed to decisions voting rights, gerrymandering, class actions, the environment, and campaign finance as examples.

In more than 70 of the 80 5-4 decisions the court has decided since 2005, the “Roberts 5” sided with corporate interests, according to Whitehouse.

Grassley hit back, criticizing Democrats for a double standard. They jump all over President Trump when he complains about the judiciary, Grassley said. 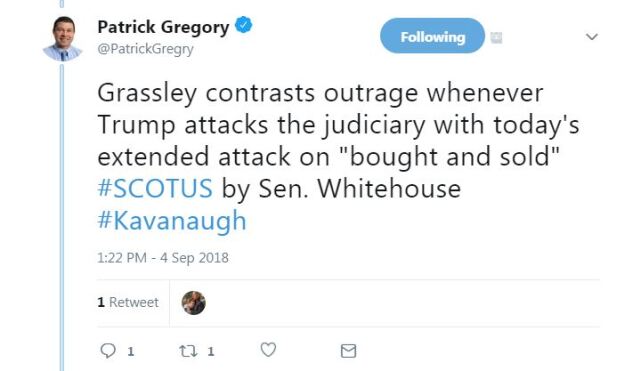 --With assistance from Greg Stohr (Bloomberg) and Laura Litvan (Bloomberg)