Brett Kavanaugh testifies during the second day of his US Senate Judiciary Committee confirmation hearing to the US Supreme Court on Capitol Hill in Washington, D.C., Sept. 5, 2018.
Photographer: Saul Loeb/AFP/Getty Images

Brett Kavanaugh may find that going back to his old job won’t be so simple if he fails to be confirmed to the nation’s highest court.

Kavanaugh, whose seat on the U.S. Supreme Court is in jeopardy after allegations of sexual assault, was already facing questions about whether he gave full and honest answers in testimony before Congress on other matters. His answers on Thursday to questions about the alleged assaults will face heightened scrutiny. He could face disciplinary proceedings if he returns to his seat on the D.C. Circuit.

The “idea that this guy could in fact go back to the court of appeals and continue to serve after this if he were not confirmed I think is really unlikely,” former New Jersey Governor Chris Christie said Sept. 23 on This Week with George Stephanopoulos.

But the process of disciplining a sitting federal judge is not what most people would expect. It’s secretive, nearly always confidential, and is rife with potential conflicts because the investigation is conducted by the judiciary itself.

It works like this: A complaint gets filed—and one has already been filed against Kavanaugh—the chief judge decides whether to appoint a committee to investigate, and if he does, the committee reports its conclusions to the circuit council, a group of judges that ultimately dole out any punishment.

The judiciary’s system of self-discipline can be seen as putting “the fox in charge of the henhouse,” Charles Gardner Geyh, who teaches judicial conduct at the Maurer School of Law, Bloomington, Ind., told Bloomberg Law, but “self-regulation is the norm in all fifty states and the federal system,” Geyh said.

If he is found to have committed judicial misconduct, Kavanaugh could face discipline, including a reprimand, suspension, or a request that he retire. However, only Congress can remove a circuit judge from office, using the impeachment process. 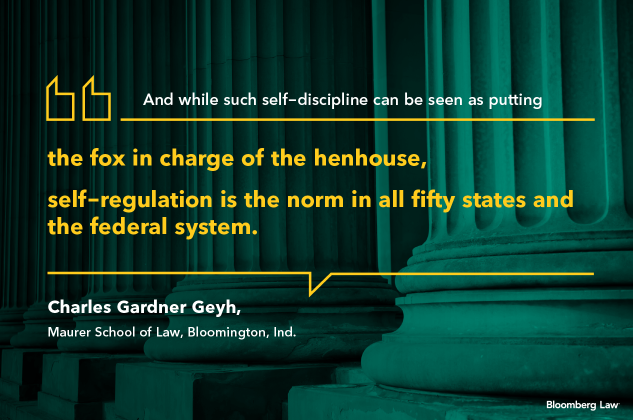 So far, The Democratic Coalition, a group founded in direct opposition to Donald Trump’s campaign for president, has filed a complaint with the D.C. Circuit related to some of Kavanaugh’s testimony concerning an email hacking scandal during his time in the George W. Bush White House. The group intends to file a supplemental complaint with the court “based on false statements and perjury related to his denial of Dr. Christine Blasey Ford’s report of sexual assault,” J. Whitfield Larrabee, an attorney for the group, told Bloomberg Law.

The process came into the spotlight this year when Ninth Circuit Judge Alex Kozinski was accused of sexual harassment of former clerks, and could give clues as to what would happen here.

The Chief Judge of the Ninth Circuit initiated the investigation into Kozinski on his own and announced it publicly, citing media reports. Chief Justice John G. Roberts Jr. transferred the matter to the Second Circuit for investigation, but Kozinski retired and the investigation was terminated before any disciplinary action was initiated.

Though the common perception seems to be that the judiciary isn’t well equipped to investigate such claims, there have been improvements to the process over the past decade, Arthur D. Hellman, an expert in judicial ethics at the University of Pittsburgh School of Law, told Bloomberg Law.

Notably, no complaints based solely on the sexual assault allegations have surfaced—only Kavanaugh’s testimony—and it’s not clear that the judiciary would adjudicate such claims.

Although individuals “may complain about actions taken by a judge outside his or her official role as a judge,” such complaints will only be considered if the “conduct might have a prejudicial effect on the administration of the business of the courts, including a substantial and widespread lowering of public confidence in the courts among reasonable people,” according to the Administrative Office of the U.S. Courts.

The public, however, may not know about the judiciary’s efforts until late in the process.

Though the ultimate outcome is public—sort of—the process is not, Hellman said. The final order is public, but not necessarily the judge’s identity. That is a decision for the chief judge of the circuit court or the committee investigating the claim, he said.

Here, the chief judge in question is Merrick Garland. Given Garland’s own brush with a seat on the Supreme Court and the high-profile nature of the allegations against Kavanaugh, it’s likely the Democratic Coalition’s complaint will be transferred to another circuit for investigation.

It’s also been standard practice when a complaint involves a circuit court judge, as opposed to a district, magistrate, or bankruptcy judge, Hellman said.

About 90 percent of all judicial misconduct complaints are filed by prison inmates or by litigants dissatisfied with a judge’s decision, David Sellers, of the Administrative Office of the U.S. Courts, told Bloomberg Law. “Most of these are dismissed fairly promptly,” he said.

However, “if the circuit chief decides that the complaint warrants further action, he will appoint an investigating committee,” Geyh said. The Judicial Conduct and Disability Act of 1980 grants the judiciary “full subpoena power” when investigating such claims.

That committee will ultimately “report back with recommendations that the circuit chief then takes to the circuit council,” which is “a group of judges within the circuit who serve as its governing body,” he said.

The circuit council decides “whether to impose a sanction, and if so, what that sanction will be,” Geyh said.

This process generally takes a few months, Hellman said, but the timeline can vary quite a bit depending on the circumstances.

The Democratic Coalition may have itself complicated matters by filing a criminal complaint with the Department of Justice.

There are rules requiring the judiciary to “consult with the appropriate prosecutorial authorities” to “avoid compromising any criminal investigation,” Sellers pointed out.

If Kavanaugh is confirmed to the high court, the options for discipline are much narrower.

“Supreme Court justices are not subject to a code of conduct or a disciplinary process,” Geyh said.

“If Kavanaugh is confirmed, impeachment is the only option,” Geyh said.

And “in the nation’s history, only one justice has been impeached by the House (in the early 1800s) and he was not removed by the Senate,” he said. That was Justice Samuel Chase.