Brett Kavanaugh, associate justice of the U.S. Supreme Court, poses during the formal group photograph in the East Conference Room of the Supreme Court in Washington, D.C.
Photographer: Andrew Harrer/Bloomberg via Getty Images

Supreme Court Justice remains anathema to many liberals. The death of Justice means he also may soon be their best hope to save abortion rights and Obamacare.

Kavanaugh, who prefers narrower rulings than some of his conservative colleagues, would find himself at the court’s ideological center if President succeeds in replacing Ginsburg with a staunch conservative. From there he could decide how far, and how quickly, it turns to the right on some of the country’s most divisive issues.

“Kavanaugh would by default become the most logical person to play the pivot role,” said , a lawyer at who has argued 79 Supreme Court cases.

That would mean to some degree supplanting Chief Justice , who has held the balance of power for the past two years, largely backing conservative results but joining with the liberal wing to strike down an abortion regulation and preserve the DACA deferred-deportation program. 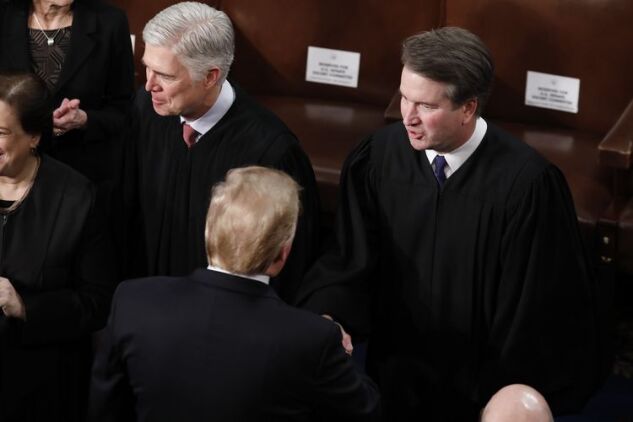 Donald Trump greets Brett Kavanaugh, as he arrives to deliver a State of the Union address in 2019.
Photographer: Aaron P. Bernstein/Bloomberg

Confirmed in 2018 after a bitter fight, Kavanaugh is hardly an ideal choice for Democrats, even if they ignore the lingering raw feelings stemming from the sexual assault allegations that almost derailed his nomination. Kavanaugh angrily denied the allegations before winning confirmation on a 50-48 vote.

In his two terms on the court, Kavanaugh has established himself as a consistent conservative. He has backed religious freedoms, voted against LGBT workers and sided with Trump on presidential powers and immigration issues. Kavanaugh has also supported property rights and the death penalty and voted to shield partisan gerrymanders from constitutional challenges.

Unlike fellow Trump appointed Justice , Kavanaugh hasn’t shown any inclination to side with the liberal wing and flip the outcome of a blockbuster case. Only once, in an antitrust dispute, has he joined the court’s liberals in a 5-4 ruling in an argued case.

When Gorsuch and Roberts to interpret federal job-discrimination law as protecting gay and transgender workers this year, Kavanaugh was in dissent. Even as he wrote that gay people “have advanced powerful policy arguments and can take pride in today’s result,” Kavanaugh said would have to change the law to give them job protections.

In other areas, Kavanaugh has emerged as more of a centrist and an incrementalist than fellow Trump appointee Gorsuch. Kavanaugh has agreed with Roberts more than with any other justice so far, according to statistics compiled by Scotusblog.

When he voted in favor of a Louisiana abortion regulation this year, Kavanaugh wrote separately to underscore that he wasn’t offering an ultimate verdict on the law. Doctors were challenging a requirement that they get privileges at a local hospital, and Kavanaugh said they hadn’t yet proven they would be unable to obtain those rights.

“In my view, additional factfinding is necessary to properly evaluate Louisiana’s law,” he wrote. Kavanaugh had previously urged his colleagues in a private memo to sidestep the abortion dispute, CNN’s Joan Biskupic reported in July.

Kavanaugh has also suggested he is less willing than Gorsuch to overturn the court’s past decisions, says , a constitutional law professor at the University of Chicago School of Law. That could prove important when the court is inevitably asked to overturn the 1973 Roe v. Wade decision, which legalized abortion nationwide.

“Justice Kavanaugh is more committed to what you might call traditional judging -- following precedent, deferring to the political branches, doing what Congress wanted to do even if it didn’t express itself perfectly,” Strauss said. “Justice Gorsuch is more inclined just to reject positions that he thinks are wrong.”

Kavanaugh has proven reluctant to throw out an entire statute just because one part is unconstitutional. That will be a central issue when the court on Nov. 10 takes up a Trump-backed bid to throw out the Affordable Care Act and its protections for people with pre-existing conditions.

“Constitutional litigation is not a game of gotcha against Congress, where litigants can ride a discrete constitutional flaw in a statute to take down the whole, otherwise constitutional statute,” Kavanaugh wrote in July in a case involving the federal ban on robocalls to mobile phones.

In other areas of the law as well, Kavanaugh has shied away from absolutist positions. This year he joined a 6-3 that said the Clean Water Act applied to some pollution discharges that don’t go directly into a major body of water. In 2019 he joined Roberts and the liberals in the death sentence of a man unless he was allowed to have a Buddhist spiritual adviser in the death chamber with him.

And after the court heard its first gun-rights case in a decade last year, Kavanaugh joined Roberts and the liberals by voting to drop the case because New York City and the state of New York changed the handgun-transportation laws that were being challenged.

Kavanaugh, however, later the court should have heard a challenge to a New Jersey law that requires people to show a “justifiable need” to get a carry permit.

All that could leave Kavanaugh as an occasional, if not frequent, supporter of Roberts’s efforts to protect the court’s institutional legitimacy by trying to avoid polarizing rulings.

Kavanaugh isn’t likely to change his approach just because the court gets a new member, said , a Washington lawyer with Gibson Dunn & Crutcher and a former law clerk to Thomas.

“I think he has a firm jurisprudence of his own, and he’s committed to what he believes is the right approach, and I don’t see changes in the composition of the court changing his course,” Walker said.

But a new justice could put Kavanaugh in a different position, forcing him to decide whether conservatives will accomplish long-sought legal goals, or at least how quickly.

“There was some speculation when Justice Kavanaugh was appointed that he would give the chief ‘cover’ by voting with him when he agreed with the liberals in 5-4 cases,” Strauss said. “That didn’t happen very much last term, but if there is a real threat to the court, I can see that changing.”