“With respect but deep sadness, Justices Ginsburg, Breyer, Sotomayor, and I dissent.” That’s how Justice Elena Kagan closed her dissent from the bench in the closely watched partisan gerrymandering cases June 27.

Her voice cracked as she read it, and she later wiped her face with a tissue.

Kagan was speaking for the court’s more liberal justices, who spoke only through her dissenting opinion in the consequential cases that could shape redistricting going forward.

Just mentioning the other justices in her closing—most dissents end simply with some version of “I dissent"—can be read both as a sign of solidarity among the court’s liberal wing, and an indication of the gravity of the situation in the dissenters’ minds.

The majority, written by Chief Justice John Roberts, said the political branches—not unelected judges—are the ones that must address political gerrymandering.

Kagan, the last Obama appointee to the high court, rarely dissents. She was one of the justices most often in the majority this term, joining the court’s majority opinions more than 80% of the time. She issued only three dissenting opinions all term.

But reading a dissent from the bench is even rarer. Done only a handful of times each term, it’s meant to highlight the grave error of the court’s decision, which Kagan called “tragically wrong.” 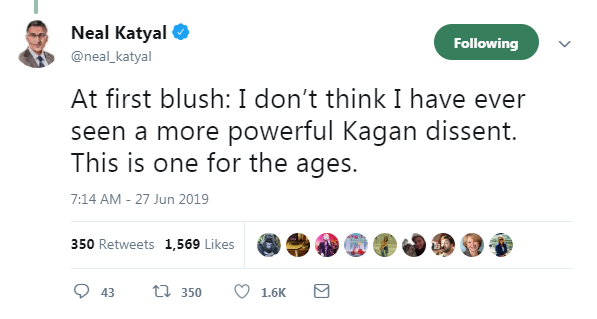 Kagan began her dissent by noting that “for the first time ever,” the court has refused to remedy a constitutional violation because it thinks the task beyond “judicial capabilities.”

“The partisan gerrymanders in these cases deprived citizens of the most fundamental of their constitutional rights: the rights to participate equally in the political process, to join with others to advance political beliefs, and to choose their political representatives.”

These gerrymanders, she said, “debased” and dishonored the country’s democratic principles, turning “upside-down” the core American belief that governmental power derives from the people.

During a reading of the dissent, Kagan asked repeatedly: Is this how American democracy is supposed to work?

“Part of the Court’s role in that system is to defend its foundations. None is more important than free and fair elections,” Kagan said.