About 100 demonstrators protested outside the home of conservative U.S. Supreme Court Justice , one week after his leaked draft opinion indicated the court is prepared to overturn the landmark Roe v. Wade abortion ruling.

The protesters chanted “keep abortion safe and legal” and “no uterus, no say” as they marched Monday in the residential Alexandria, Virginia, neighborhood where Alito lives before stopping in front of his home. 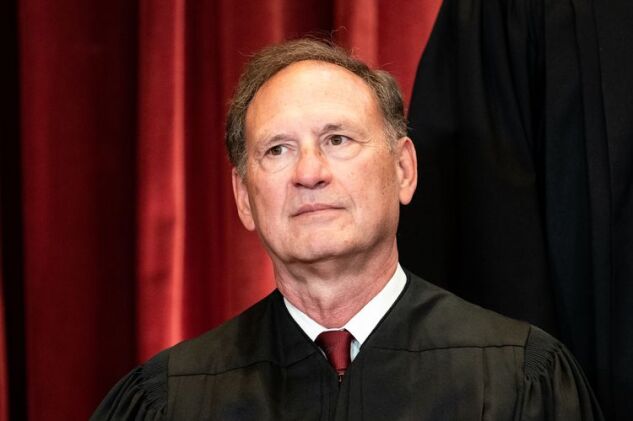 Progressive activists said they intend to protest outside the homes of the court’s six conservatives after Politico reported last week that five of them cast preliminary votes to overturn the 1973 decision that legalized abortion nationwide.

A crowd roughly the same size marched May 7 from Justice ’s house in Chevy Chase, Maryland, to Chief Justice ’s residence about a half mile away. CNN reported last week that Roberts opposed completely overturning Roe and instead sought a compromise that would leave parts of the ruling intact while upholding a Mississippi law that limits abortion at 15 weeks of pregnancy.

Shortly before the protest began Monday evening, the Senate passed legislation that would extend security protection to the justices’ families.

“Threats to the physical safety of Supreme Court Justices and their families are disgraceful, and attempts to intimidate and influence the independence of our judiciary cannot be tolerated,” Senator of Texas, who introduced the bill last week with Senator , a Democrat from Delaware, said in a statement.

The bill needs to be passed by the House of Representatives before it’s sent to President to sign into law.

In a Monday morning tweet, White House Press Secretary said Biden “strongly believes in the Constitutional right to protest. But that should never include violence, threats, or vandalism. Judges perform an incredibly important function in our society, and they must be able to do their jobs without concern for their personal safety.”

A coalition of more than 30 abortion advocacy groups are planning a nationwide day of protests on May 14. Large events are scheduled in Chicago, Los Angeles, New York, and Washington D.C. with protests planned in at least 200 additional cities, including Anchorage, Alaska, and Wilmington, Delaware.

The protest outside of Alito’s home was peaceful, with a mix of men and women chanting loudly while walking in the street that lacked sidewalks, blocking the occasional car. Police accompanied the marchers and several officers stood in front of Alito’s house.

To contact the reporter on this story:
in Arlington at malder5@bloomberg.net