“They should just take the nigger out and shoot him behind the jail.”

“I have wondered if black people even have souls.”

Death-row inmates point to evidence that jurors from their long-ago trials said those things about the men they were tasked with judging impartially.

If the U.S. Supreme Court takes up their appeals, then the justices will be asked to decide if the clear racism so tainted these proceedings in Oklahoma and Georgia that the men should be spared the ultimate punishment.

Dale Baich, attorney for Julius Jones, whose trial would’ve ended with a bullet in the back of an Oklahoma jail if a juror had his alleged druthers, said the issue at hand is the “impact of race on the criminal justice system and the death penalty in particular.”

The cases pose a particularly crucial test for Chief Justice John G. Roberts Jr., who has voted both ways in criminal cases tainted by racism and may hold the deciding vote. The Georgia case already caught the court’s eye last year, producing a contentious split among the justices and promising another heated round if the same dividing lines hold.

The appeal from Georgia inmate Keith Tharpe, whose possession of a soul was doubted by a man who sent him to death row, “raises the question of whether we, as a society, are willing to tolerate the blatant, in-your-face racism that reared its head in Mr. Tharpe’s case and tainted his death sentence,” said his attorney, Marcy Widder.

The petitions are the latest salvos in the long-running legal sagas of both murder convicts.

Tharpe was sentenced to death for the 1990 murder of his sister-in-law. He shot her, rolled her into a ditch, reloaded, and shot her again, a state court opinion recounted.

Years later, one of his jurors swore in an affidavit that “there are two types of black people: 1. Black folks and 2. Niggers"; that Tharpe, “who wasn’t in the ‘good’ black folks category in my book, should get the electric chair for what he did"; and that some of the jurors voted for death because they felt Tharpe “should be an example to other blacks who kill blacks.”

The juror also said that, after studying the Bible, he “wondered if black people even have souls.”

Jones was sent to death row for a 1999 shooting death for which he has maintained his innocence. His case was featured, recently, in the ABC series The Last Defense, which noted the racist juror issue as well as racial tensions generally in Edmond, Okla., where the crime occurred.

In 2017, one of the jurors told Jones’ legal team in a Facebook message that another juror had described the trial as a “waste of time” and expressed his belief that “they should just take the nigger out and shoot him behind the jail.” 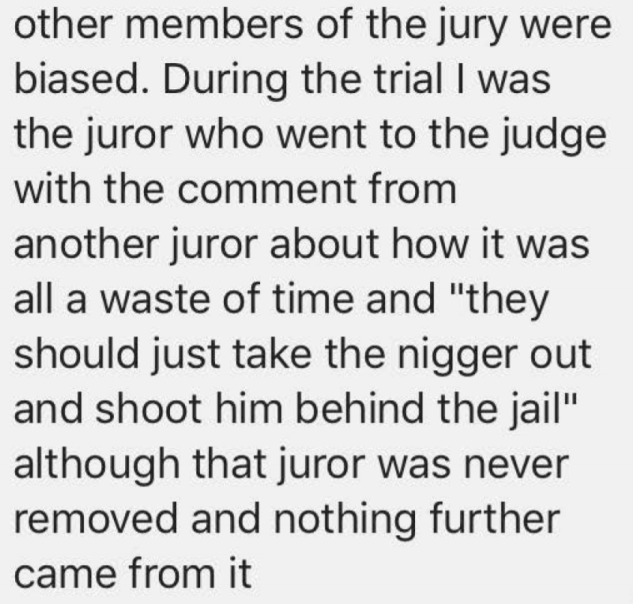 Despite these stark allegations, state and federal courts have blocked both men from pressing the juror claims, citing procedural hurdles as well as the longstanding prohibition against probing the prized secrecy of jury deliberations.

But the high court recently put a dent in that longstanding jury rule when it comes to race, one that both Tharpe and Jones hope they can use to their advantage.

In 2017’s Peña-Rodriguez v. Colorado, the high court said that, if a juror makes a clear statement showing they relied on racial stereotypes or animus to convict a defendant, then courts can consider the juror’s statement as evidence of a Sixth Amendment violation. The amendment protects the right to impartial jury.

Miguel Angel Peña-Rodriguez was convicted of unlawful sexual contact and harassment. After the jury was dismissed, two jurors told Peña-Rodriguez’s lawyer that another juror said he thought the defendant was guilty “because he’s Mexican and Mexican men take whatever they want.”

Justice Samuel A. Alito Jr. dissented, joined by Roberts and Justice Clarence Thomas. Though the majority’s intentions are “admirable,” Alito wrote, the decision nonetheless marks “a startling development” in allowing courts to effectively peer into the jury room.

But just weeks prior to the Peña-Rodriguez decision, Roberts aligned with the five justices from the Peña-Rodriguez majority in a case raising similar issues. In fact, he wrote the majority opinion in the case, Buck v. Davis, where an expert witness told the jury considering the fate of the defendant, Duane Buck, that he’s more dangerous because he’s black.

“Buck may have been sentenced to death in part because of his race,” Roberts wrote, finding this “a disturbing departure from a basic premise of our criminal justice system: Our law punishes people for what they do, not who they are.” Thomas and Alito dissented again.

Both the Buck and Peña-Rodriguez cases were decided by an eight-member court after Justice Antonin Scalia’s death, shortly before Justice Neil M. Gorsuch filled Scalia’s seat. Since his arrival, Gorsuch has sided with Alito and Thomas against death row inmates’ attempts to avoid execution.

That trio dissented last year from a brief, unsigned opinion in which the justices vacated a federal appeals court decision that went against Tharpe.

The “remarkable affidavit,” the majority said, “presents a strong factual basis for the argument that Tharpe’s race affected” the juror’s vote for a death verdict. “At the very least, jurists of reason could debate whether Tharpe has shown by clear and convincing evidence that the state court’s factual determination was wrong. The Eleventh Circuit erred when it concluded otherwise,” it said, sending the case back for further review on the question whether Tharpe is still procedurally blocked from pressing the juror claim.

Thomas, the court’s only black justice, wrote the dissent. He accused his colleagues of engaging in a “pointless exercise” that accomplishes “little more than a do-over in the Court of Appeals.” He said “the only possible explanation” for the majority’s ruling was its concern with “a juror affidavit that expresses racist opinions about blacks.”

Though the juror’s opinions “are certainly odious,” Thomas conceded, “their odiousness does not excuse us from doing our job correctly, or allow us to pretend that the lower courts have not done theirs.” He accused his colleagues of “bending the rules here to show its concern for a black capital inmate.”

The court’s decision “will only delay justice for Jaquelin Freeman, who was also black, who is ignored by the majority, and who was murdered by Tharpe 27 years ago,” Thomas wrote in the dissent joined by Alito and Gorsuch, referring to Tharpe’s victim.

As presaged by Thomas, the Eleventh Circuit ruled against Tharpe again after the justices sent the case back there, setting the stage for his latest high court appeal.

In their latest Supreme Court filings, Tharpe and the state disagree about whether Peña-Rodriguez should apply retroactively to his case and whether procedural hurdles should block him from pressing his claim, with Tharpe alleging that the lower court keeps moving the goalposts.

The state says courts were correct in blocking Tharpe’s juror claim, reasoning he should have raised it earlier in the appeals process and can’t justify his failure to do so. Like Thomas’ dissent last year, the state further points out that there’s no evidence that racial bias was discussed during deliberations, seeking to distinguish Tharpe’s case from Peña-Rodriguez. In the end, the state says Tharpe’s appeal simply doesn’t present an important enough legal question to warrant the justices’ attention, and that it seeks “mere error correction,” something that the Supreme Court, in theory at least, is not in the business of doing.

While the state points to procedure, Tharpe and the NAACP Legal Defense & Educational Fund, Inc., which is supporting him at the high court, pin their hopes on the larger themes of the high court’s recent race rulings. They argue that Peña-Rodriguez should apply even more forcefully here, because this is a death penalty case and Peña-Rodriguez wasn’t.

The NAACP LDF brief argues that Tharpe’s claim is even stronger than Buck’s, because there the court was concerned with the mere possibility that the jury sentenced Buck to death because he was black. Based on the juror affidavit in Tharpe’s case, there is no “may” about it, the NAACP LDF argues.

Samuel Spital, lead counsel on the NAACP LDF brief who also represented Buck, sees a connection between Buck and the Tharpe and Jones cases. “We know that these two men are facing execution at least in part because they’re black,” he said. “Under those circumstances, the state just doesn’t have an interest in enforcing a death sentence, and for that reason, the procedural obstacles that you would have with respect to certain other claims should not be part of the analysis.”

Like Tharpe, Jones also argues that lower courts have essentially manufactured reasons to keep him from airing his juror claim.

But he also says that his case “reveals far more than simply another juror’s racist and dehumanizing view of Mr. Jones as a ‘nigger.’”

He notes that the juror in his case allegedly referred to the proceedings as a “waste of time,” and, further, that the juror’s alleged wish that they “take the nigger out and shoot him behind the jail” reveals an endorsement of “lynch-mob racism reminiscent of Reconstruction days,” quoting a 1988 dissent by Justice Thurgood Marshall.

In that case, Marshall, the court’s first black justice, dissented from his colleagues’ refusal to take up a death penalty case in which a juror handed the bailiff a napkin with a drawing of a man on a gallows above the inscription, “Hang the Niggers.”