Nine of President Donald Trump’s judicial nominees received unqualified marks from the ABA Standing Committee on the Federal Judiciary. The issue boiled over when the Senate Judiciary Committee received the report on Lawrence VanDyke, who was nominated to the U.S. Court of Appeals for the Ninth Circuit.
Photographer: Josh Edelson/AFP via Getty Images

The American Bar Association’s judicial ratings are under scrutiny after a scathing assessment drove a Trump nominee to tears, prompting new skepticism about their usefulness in a charged political climate.

Nine of President Donald Trump’s nominees have received unqualified marks from the ABA Standing Committee on the Federal Judiciary, three whose nominations moved forward in the past few weeks. But it also has cleared virtually all of his nominees to the Republican-led Senate, including those for trial and appellate courts, and two to the Supreme Court.

Those facts taken separately are fueling complaints from both sides of the political divide that the ratings panel is more biased than ever, despite new leadership, and is irrelevant amid Trump’s drive to reshape the judiciary with conservatives.

The committee has been “almost bullied” by the Republicans to appear nonpartisan, said Christopher Kang, a co-founder and chief counsel for judicial advocacy group Demand Justice who worked on judicial nominations during the Obama White House.

So much so that the ratings have lost their “overall credibility from everybody,” Kang said, also noting that perhaps “the time has come for the ABA to no longer play this role.”

The ABA ratings system have been a political process for so long, “no one cares anymore” about them, Thomas Jipping, deputy director of the Edwin Meese III Center for Legal and Judicial Studies at the conservative Heritage Foundation, said. 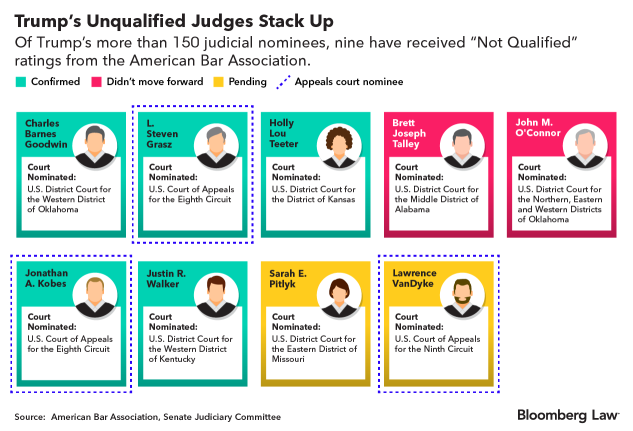 ABA judiciary ratings have long been controversial, but questions about their relevancy are prominent in the Trump era.

The issue boiled over on Capitol Hill on Oct. 30 when the Senate Judiciary Committee received the report on Lawrence VanDyke, a Justice Department environmental lawyer opposed by liberal groups. He’s been nominated to the U.S. Court of Appeals for the Ninth Circuit.

But the unusually sharp tone and personal nature of the report on VanDyke, calling him “arrogant, lazy” and “an ideologue” and questioning whether he’d be fair to the LGBT community, crossed a line for a number of lawmakers and legal observers.

VanDyke, who received the letter the night before, expressed dismay and choked up at his confirmation hearing while defending himself.

The determination was based on 60 interviews with peers, including a cross-section of attorneys and judges, as well as background materials that included 600 pages of publicly produced emails, news reports that interviewed him, and articles and opinions written about him, the committee said. He was also interviewed. The ABA committee defended its impartiality and its grading of nominees.

Republicans quickly renewed complaints about the standing committee as catering to liberals. Missouri’s Josh Hawley and Utah’s Mike Lee on the Judiciary Committee took things further. They criticized the role of the ABA in the confirmation process, and called on the White House to no longer make nominees available for review.

“Mr. VanDyke, all I can say about this letter is that I think it is a shameful exercise in political bias,” Hawley said.

Some Democrats defended ABA independence, but others, like Connecticut Sen. Richard Blumenthal, said that the organization is in hot water and may want to consider some changes.

“I think the ABA has to assess whether its ratings are going to continue to have the kind of credibility they had merited and deserved in the past,” Blumenthal told reporters following the hearing for VanDyke. “We live in a much more politically polarized time.”

An independent arm of the ABA, the 15-member standing committee has helped move judicial nominees since the Eisenhower era. Its members, including the chairman, are appointed by the association’s president to three-year terms. The ranks have included trial attorneys, law professors, and Big Law partners.

ABA President Judy Perry Martinez described the standing committee members in an interview with Bloomberg Law as “individuals who not only care about the legal profession—they have demonstrated and exhibited that care throughout their careers—but they care deeply and are committed to having a justice system” that reflects the values of the ABA.

The standing committee is said to base its evaluations on integrity, professional competence, and judicial temperament. Evaluations are conducted though confidential interviews with a nominee’s peers and the final rating ratings are a composite of those conversations, the ABA said.

Carl Tobias, a University of Richmond law professor who writes about federal judicial selection, said standing committee evaluations and ratings are overall “very good.” Interviews with peers are typically an accurate indicator of competence and the ability to be a good judge, he said.

“Nobody wants to give a ‘not qualified’ rating,” said former committee member Robert N. Weiner, noting that it does happen. Weiner, a trial lawyer with Arnold & Porter in Washington, served on the committee from 2016-17.

“People bend over backwards” not to let their political views influence their evaluations, Weiner said.

A number of committee members have political giving ties, a point raised in the VanDyke controversy that undercuts the impartiality claim with some.

For instance, Marcia Davenport, the member who conducted VanDyke’s initial evaluation for the Ninth Circuit, was criticized for donating $150 to his opponent in a 2014 race for a Montana Supreme Court seat. Bloomberg Law confirmed the donation. New Standing Committee Chairman William C. Hubbard said in a statement after the VanDyke hearing that the panel requires two evaluators for all nominees who receive an unqualified rating.

Hubbard also has made political donations to Republican and Democratic campaigns. For instance, he has given a total of $14,500 to Republican Judiciary Committee Chairman Lindsey Graham’s campaigns for Senate over the years, according to Federal Election Commission data.

Some liberal groups say the committee has recently gone too far right in an effort to appease Republicans.

“Having been involved in judicial selection for nearly 40 years, this is not the same ABA that it used to be,” Nan Aron, president of liberal judicial advocacy group Alliance for Justice, said.

Although the “Not Qualified” ratings grab attention, 97% of the judicial nominees Trump has named have received an either “Qualified” or “Well Qualified” rating from the ABA. Aron says that’s the result of pressure from Republican groups, like the conservative Federalist Society.

“With this administration, the ABA has been far too narrow in its review and lenient in giving good ratings to nominees who manifest demonstrable bias and lack of judicial temperament,” Aron said.

Trump has had more judicial candidates rated as unqualified compared to recent predecessors. But they’ve been handled differently by different administrations.

Often, Kang said, they disagreed with the rating but chose not to move forward “because at the time, the ratings reflected the views of the legal community and were understood to be nonpartisan.”

Though the ABA can be useful, he said their “black box” evaluations process can get too political with certain nominees, said Davis, who was chief counsel for nominations for former Judiciary Committee Chairman Chuck Grassley (R-Iowa).

Carrie Severino chief counsel and policy director of the conservative judicial advocacy group Judicial Crisis Network, said the constitutional process for confirming nominees already has built-in evaluators. “We have 100 judicial evaluators that the Constitution gives us and they are the senators,” Severino said.

Sen. Sheldon Whitehouse, a Rhode Island Democrat and Judiciary Committee member, suggested that the committee bring in the ABA to discuss its decision privately.

“I don’t love the ABA thing either, but we do have a remedy for the concerns that the senators have expressed: By bringing them in and trying to get to the bottom of this,” Whitehouse said. “Because just to gloss over concerns that have been publicly raised of this magnitude is a very bad precedent for us to set.”

The ABA would be happy to testify before the Judiciary Committee if it was asked to, a spokesman for the association said.