Judge , the first Black woman nominated to the Supreme Court, said she would recuse from a pending case over affirmative action at Harvard University, where she serves on the board of overseers.

The Supreme Court is abolishing the use of race in college admissions in the case, which will be among the court’s first arguments when its next term starts in October.

Jackson didn’t discuss whether she will also recuse from a companion case involving the University of North Carolina. 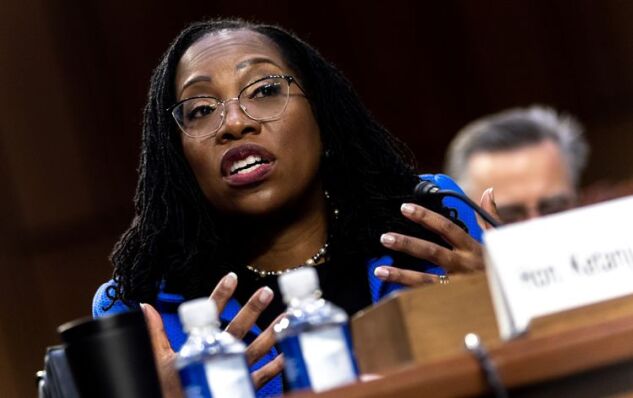 Jackson made the statement during her Senate confirmation hearings Wednesday, in response to a question from Republican Senator of Texas.

“Do you plan to recuse yourself from this lawsuit?” Cruz asked.

“That is my plan senator,” she responded.

The plaintiffs in Students for Fair Admissions v. Harvard say the school’s affirmative action program penalizes Asian-American students in violation of the Civil Rights Act and are asking the court to reconsider earlier rulings allowing race-based criteria for higher education.

The justices aren’t technically bound by an ethics code, but say they consult the code of conduct for lower court judges. Though rare, individual justices have recused due to family ties with the parties or lawyers, financial interests, or conflicts with their prior work.

Jackson, who received undergraduate and law degrees from Harvard, has a six-year term on Harvard’s Board of Overseers that expires in May. The board is an alumni panel that “provides counsel to the University’s leadership on priorities, plans, and strategic initiatives,” according to the school’s Leadership and Governance webpage.

Documents submitted in connection with Jackson’s Senate questionnaire suggest that Harvard’s affirmative action program was a key issue during her election to the board in 2016, with several candidates weighing in on the value of such programs.

Jackson, who was then a federal trial court judge, declined to comment at the time. “I feel duty bound not to express my personal views on matters of significance that have the potential to come before me in court,” she said.

It’s “inconceivable” that the board didn’t discuss Harvard’s policy and the suit against the university during her tenure, said the Heritage Foundation‘s , who opposes Jackson’s nomination. He notes that she’s twice recused from cases because of her role on the board, one in a FOIA case and the other about sexual assault guidelines.

The justices, however, have suggested that the bar for Supreme Court justices to recuse is higher than lower court judges because there is no one to take their place once removed from the case.

Potential conflicts abound in the litigation against Harvard.

Four of the justices -- including Justice Stephen Breyer, whom Jackson would replace -- went to Harvard Law School and Justice served as its dean from 2003 and 2009. Justice taught there under Kagan.

U.S. Solicitor General had to get an ethics waiver to participate because she’d served as a lecturer there, too.

Progressives have pushed Justice Clarence Thomas to recuse after his wife’s connections to a group that filed a friend-of-the-court brief in the case became known. Virginia “Ginni” Thomas serves on the Board of Advisors of the National Association of Scholars, a conservative think tank focused on education. The group filed a brief urging the justices to take the case.

Harvard law professor Mark Tushnet said none of the justices are legally required to recuse, though in the case of Thomas and Jackson it would be prudent.

In a recent interview with the Washington Free Beacon, Thomas said her role on the board is to secure grassroots support and that she never discussed the brief with anyone at the association.

As for Jackson, Tushnet notes that the Board of Overseers isn’t a decision-making body and serves more as a sounding board for university officials. But the touchstone for recusal is the appearance of bias, rather than actual bias. And these two cases could rise to that level, he said.

To contact the reporter on this story:
in Arlington at krobinson103@bloomberg.net