Justice jumped right into the US Supreme Court’s ideological divide in her first argument Monday, siding with other liberals in advocating to preserve the EPA’s authority to regulate wetlands. 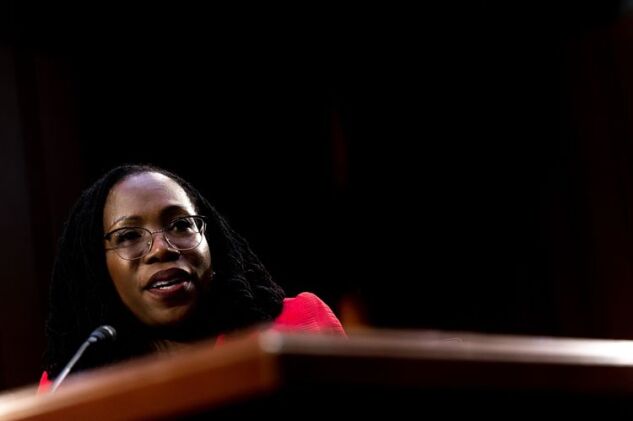 Her questions -- including during the rebuttal period when attorneys typically get to close their arguments without interruption -- suggest Jackson will be an active questioner from the bench. The direction of her queries also indicated that she may tend to side on some issues with the other two liberals on the 6-3 conservative leaning court.

The first case heard Monday focused on whether an Idaho couple could build a house on land that regulators at the Environmental Protection Agency say is protected wetlands. The topic -- administrative law -- was a comfortable one for Jackson’s first argument, as she was a longtime judge in the District of Columbia, where the federal courts field a disproportionate number of cases involving agency authority.

Jackson jumped in less than 10 minutes into the argument, questioning contentions by couples’ lawyer, of the Pacific Legal Foundation, that the Clean Water Act covers only wetlands that abut a major waterway and not those that are only nearby.

“Why would Congress draw the coverage line between abutting wetlands and neighboring wetlands when the objective of the statute is to ensure the chemical physical and biological integrity of the nation’s waters?” Jackson asked.

What constitutes a wetland “adjacent to” a nearby lake, river or other major waterway is a central question in the case. While conservatives during the arguments signaled their interest in limiting the reach of the act, liberal members of the court indicated they were interested in preserving much of the legislation.

Jackson, 52, was sworn in as the first Black female justice on June 30, following the retirement of longtime Justice . Jackson clerked for Breyer from 1999 to 2000.

She was previously a judge on the US Court of Appeals for the D.C. Circuit and the US District Court for the District of Columbia. Prior to that she served on the US Sentencing Commission and was a federal public defender in DC.

Prior to the start of the argument, as Chief Justice was making his opening announcement, Jackson chatted and laughed with Justice , who sits beside her at the court and who also served on the D.C. Circuit.

Jackson took the bench Monday wearing a lacy jabot -- an ornamental collar -- perhaps a nod to the late Justice who had different jabots for various occasions, including when she was in dissent.

The debut of the court’s newest justice attracted members of the public, who were seeking to attend the first oral argument in person since the start of the Covid-19 pandemic.

“I’m an African-American attorney, so to be here at the first oral argument with Justice Ketanji Brown Jackson is historic,” said Brenda Baldwin-White, an attorney with the Federal Judicial Center, as she waited outside the court before arguments began.

Mecca Aikens, 22, a first-year Georgetown Law student with aspirations of becoming a judge, also waited to get inside for Jackson’s first argument. She said she was grateful to “see someone who looks like me doing something this incredible.”

To contact the reporter on this story:
in Arlington at krobinson103@bloomberg.net

To contact the editors responsible for this story:
at sstern22@bloomberg.net