Law school is expensive. In Part 1 of a two-part series on law student debt, Vinson & Elkins LLP’s Bryan Gividen discusses how student loan debt works and how law school applicants should evaluate whether a school is a responsible financial decision.

Law schools have started dispatching admittance letters, and most applicants are going to have choices to make. Though thinking about debt is the least fun part of the law school process, applicants and recent graduates need to understand the consequences of debt now, rather than later.

Often applicants just push debt to the back of their mind or think about it only vaguely. But if you don’t understand what debt means in terms of dollars and dimes, it can limit your options after graduation. Understanding the numbers behind the interest on your debt is different than simply knowing interest is out there.

The vast majority of students take out federal loans, which currently offer an average interest rate of about 6.58%. For every $10,000 of student loans you borrow at that rate, you will pay about $196 per month over a five-year period. (Just to make the math easy, we’re going to round that to $200.) So if you borrowed $150,000, you’d need to pay about $3,000 per month to pay off your loans in five years, and you’ll end up paying a little more than $26,000 in interest alone.

Paying $3,000 per month is no small thing. It effectively drops your annual salary by $36,000 per year. So, you think, you want to stretch out repayment over a longer period of time so you don’t have to pay as much per month. But watch what happens to a $150,000 in loans when you do that: 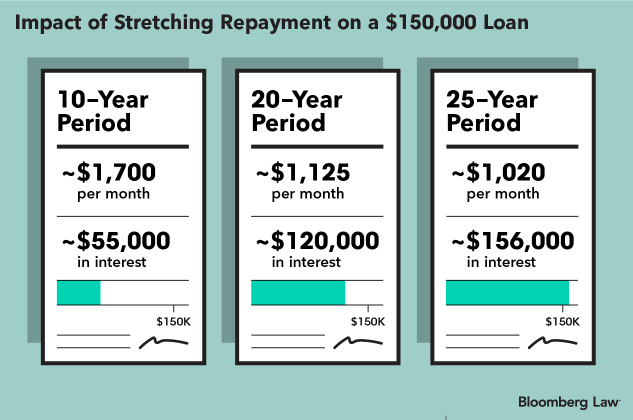 If you take a 25-year repayment period, you can shave down your payments to a more manageable $1,000 per month. But now the interest you’re paying back is more than double the loan itself. That means for $150,000 of student loans, you will pay back over $300,000.

At the current interest rate, that doubling rule applies no matter the amount of the student loans. So if you’re an applicant considering paying sticker price at a law school whose out-of-pocket cost is over $300,000, you will have to pay more than $2,000 every month for 25 years and will ultimately pay back over $600,000 in debt.

You cannot escape that math. As J. Reuben Clark, the namesake of Brigham Young University’s law school, said, “Interest never sleeps nor sickens nor dies; … it works on Sundays and holidays; it never takes a vacation; it never visits nor travels …. it has no love, no sympathy.” No human can match interest’s work ethic. The time you will be most in control of your debt is before you take it on.

How to Evaluate Law Schools

Law school applicants need to carefully consider whether attending a law school at a particular price is right for them. Some just pull out the U.S. News & World Report rankings and blithely assume the higher, the better, regardless of cost. For some, that blind roll of the dice will work out. For others, it will be a disaster.

Here are my recommendations for evaluating the financial prospects of a law degree.

Apply broadly. Though you should not go to just any law school, you should feel comfortable applying to many of them. Even if a school’s tuition is high, you may receive financial aid that makes it much more affordable. And you may be able to negotiate a higher scholarship based on what other comparable schools offer. You can’t know the all-in cost until you know what the school is willing to discount.

Factor in the cost of living. Schools provide a cost-of-living estimate that can be factored into your loans. Unsurprisingly, living in New York City costs more than living in Iowa City. These cost-of-living differences can swing your student loans by more than $25,000 over three years. (And that estimate is only using the school’s estimate of cost of living, which generally understates the all-in costs for the year.)

Understand income potential. Applicants should know that entry-level legal jobs tend to lump into two ranges. About half of graduates go into jobs paying between $45,000 and $75,000, while about 20% go into jobs paying between $180,000 and $190,000, which are almost exclusively in large law firms. BigLaw salary makes quickly paying back large loans feasible. Earning in the lower range means that graduates will likely have to look at longer repayment periods or other options (which we’ll discuss in a moment).

Understand employment prospects from a law school. If attending a certain school can go into a higher paying job, then paying higher tuition may be worth it. If you’re attending a school that provides a high chance to practice in the region you want, in the type of job you want, then taking on additional debt may be justified. But you should not use the U.S. News rankings as shorthand for employment prospects.

Instead, you should visit a compendium of employment data created by the non-profit Law School Transparency. The compendium includes detailed information about the location and types of jobs that recent graduates obtained, including whether it was into a large law firm. Some schools only place a small percentage of graduates, if any, into high paying jobs.

Remember that you cannot guarantee your performance in law school and there is a chance you will graduate toward the lower end of your class. You need to plan for how to handle your finances if you cannot secure a high-paying position after graduation.

But remember that loans and interest do not care how much you enjoyed your soon-to-be halcyon days of law school. They only care that you pay them back.

Bryan Gividen is an attorney at Vinson & Elkins LLP in Dallas where he focuses on shareholder and appellate litigation. He regularly tweets advice for law students, recent graduates, and anyone else willing to listen at @BryanGividen.