A woman stands in the doorway of a courtroom at the Stanley Mosk Courthouse in downtown Los Angeles March 16, 2009.
ROBYN BECK/AFP/Getty Images

Every trial is a battle between attorneys over who can tell the most compelling story, A2L Consulting CEO Ken Lopez writes. Lopez gives tips on how to make your client’s story dramatic and convincing to the jury or judge.

Whether $10,000 or $1 billion is at stake, any trial is no more and no less than a battle of competing stories. Each side has a narrative it wants to tell, and the winner is almost always going to be the side whose story is more convincing to the jury or judge.

This statement is based on solid science. A host of psychological studies have concluded that our brains are hard wired to tell stories, to listen to stories, and to remember stories.

The research tells us, in fact, that human beings automatically make stories out of virtually all life events to gain a sense of control, even if it proves to be a false sense. Researchers believe that storytelling began with early humans hearing their tribal elders recount stories at the campfire. In the 21st century, storytelling is still the best way to present information to an audience, including a jury.

So how do you tell a better story than your opponent? Think about Pixar, the only motion picture studio that consistently tells stories that make people care deeply about an animated character like a robot, a fish, or a kids’ toy. Pixar has developed a formula for grabbing people’s attention and holding it. 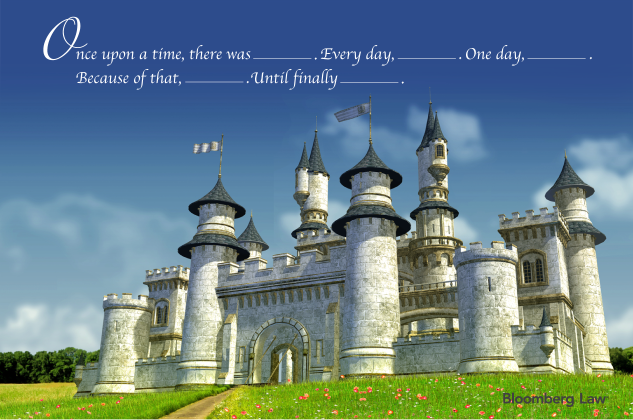 Obviously, every trial will have its own wrinkles. But let’s say you’re representing a defendant in an employment law case. Here’s how the outline works, omitting the “once upon a time”: There was a company, my client. Every day, the plaintiff came to work. One day, she received a negative performance rating. Because of that, she concluded, understandably but incorrectly, that she was a victim of unlawful discrimination. Because of that, she unfortunately filed this lawsuit against the company. Until finally, we ended up here in the courtroom, and I am here to tell you the story of what really happened.

And in telling his or her story, a trial lawyer should also make sure that the story includes characters the jury can care about and that it contains a significant element of drama.

Every Case Can Be a Dramatic Tale

Some lawyers may object that it would be difficult or impossible to turn a patent dispute or a contract claim into a dramatic tale or to make corporate executives into relatable characters. I disagree. If only you look for them, every trial has those elements. After all, the underlying events of every trial were actions taken by human beings who had human motivations.

In addition, charisma and likability count. The best story may not save a trial lawyer who is unattractive, poorly dressed or monotonous in his or her presentation. This may not be fair or right, but it is another reality that science has proved.

Finally, it is crucial to make sure your story is supported by visuals. A majority of human beings do not assimilate information primarily from what they hear. They learn from what they see. Most lawyers, in contrast, are not visual learners. Most of their lives, they have learned things by hearing lectures and arguments and reading cases.

Science has shown that visual aids in courtroom presentations enhance jurors’ attention and help them recall key events in the narrative. Charts and diagrams improve people’s comprehension of quantitative information, and animation adds to people’s understanding of any dynamic process.

In addition, especially in this decade as the online world has become ubiquitous and graphics are everywhere, jurors expect to see a carefully designed graphic presentation. A trial needs to feel as if it is part of a well-scripted show, not a set of bullet points or undigested notes. That’s true regardless of the subject matter of the case.

Over the years, more sophisticated programs and techniques have sprung up to help trial lawyers tell their stories. Many are worthwhile, but trial lawyers shouldn’t get too caught up in the technology. PowerPoint is a useful tool, but it should be used to support the story you are telling, not to tell the story. Reading your slides out loud, for example, is the easiest way to lose your audience and lose your case.

Just emerging as a visual dynamic in trials is the appearance of emojis in the courtroom. Thirty percent of all the mentions of emojis in court decisions in the past 15 years occurred in 2018. Although very few court cases have yet turned on the meaning of an emoji, I have little doubt that those cases are coming. And we may not be far off from the day when lawyers will present emojis to juries in order to persuade them. That could be the next step in courtroom graphics.

Ken Lopez founded A2L Consulting in 1995, and serves as its CEO. A2L’s services include jury consulting, litigation graphics consulting and the deployment and use of state-of-the-art technology in the courtroom.