General counsels are a mysterious, idiosyncratic bunch, but Chambers Associate’s research has found only 40% were previously partners in private practice, a third are female, and Harvard is the most popular school for their education. Chambers Associate deputy editor Thomas Lewis looks at their similarities in their careers and education.

The job of general counsel is the ultimate combination of legal nous and business acumen, but how do general counsels gain the necessary expertise? We know it takes years to accumulate; we know experience in both law and business is helpful; but that still leaves a circuitous route to the top, and a confusing path to emulate. So is there anything that unites this group of leaders?

For answers, we turned to the most prestigious in-house positions out there—the top legal jobs (either general counsel or chief legal officer) at the companies in the S&P 500 stock index.

Chambers Associate’s research found that among those holding the top legal positions at the S&P 500 companies, 40% had previously been partners in private practice. So while Apple’s general counsel, Katherine Adams, might have been a partner at Sidley Austin first, she’s actually in a minority. 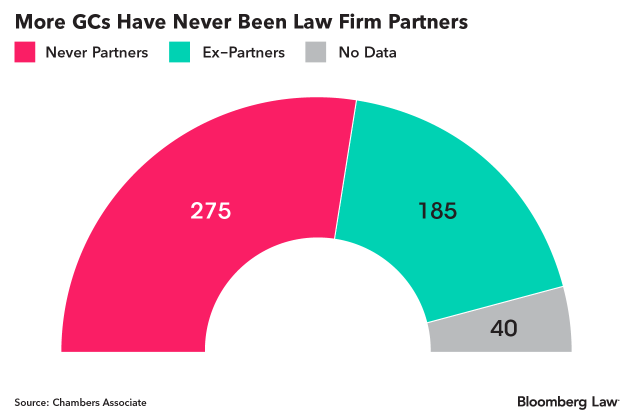 This suggests more GCs gained their seniority in-house. But a law firm is still an essential piece of the puzzle: Businesses can’t train their junior lawyers to the same level as law firms do. In a recent interview, Roger Theodoredis, CLO at Chipotle, told us he expects his new recruits to have had at least three to five years’ experience at a large law firm.

And despite the results, there are some clear advantages to climbing the ladder within a firm. Being a partner means building deep relationships with clients. Those relationships can reap job offers. When it was announced that David Drummond, general counsel of Google’s parent company Alphabet, was stepping down, The New York Times reported that “as an outside lawyer for the Silicon Valley firm Wilson Sonsini, he helped draft the original incorporation papers for Google and later became the company’s first general counsel.”

The reality though, and the reason for the results, is that most won’t be offered a partner’s privilege, and many don’t wish to stay that long, working in the same environment. David Hyman, of Netflix, for example, left Morrison & Foerster while still an associate. It didn’t do him too much harm. 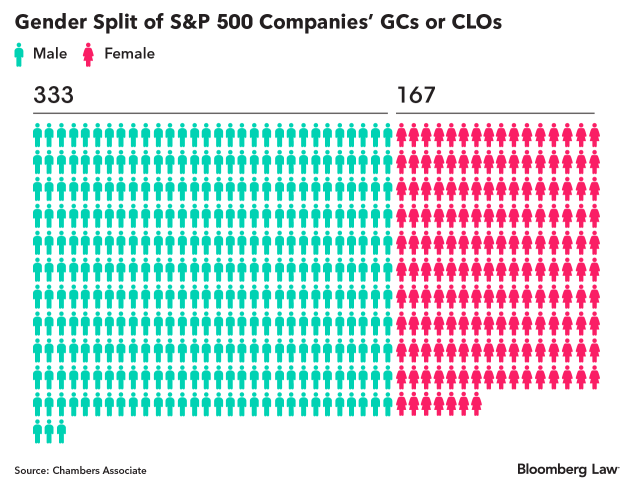 Law firms will shed talent, and this is currently a heavily gendered affair. Looking across 101 law firms researched by Chambers Associate in 2019, the proportion of their associates who were women was 46%. At the partnership level 23% were female.

To examine whether a similar gender imbalance existed in-house, we tracked the gender of the S&P 500 companies’ GCs. A third were female.

While it remains poor, we must remember that is the very top of the in-house tree, where we might presume implicit bias would be most concentrated. For the equivalent positions in law firms—those of managing partner or firm chair—the situation is much worse. Among 101 top firms Chambers Associate researched, the number with women in those positions barely scraped into double figures.

Ultimately, these results agree with the industry consensus that in-house teams are more diverse than their private practice counterparts. Because of this disparity, we’ve seen in-house teams holding their law firms to account over their lack of diversity, and an open letter penned by the group General Counsel for Law Firm Diversity calling for change.

With law firms playing a crucial role in training in-house lawyers, the firms at which lawyers practice could conceivably affect both their ability and the way a company’s recruiters view them. So was there a go-to firm among the GCs?

The data shows that Akin Gump Strauss Hauer & Feld, an international firm with a renowned restructuring practice, and Foley & Lardner, a national firm produced through a recent merger, were most prolific in producing the S&P 500 companies’ general counsel. Each can claim 10 leading lawyers as alumni. That includes Mark Shaw, CLO at Southwest Airlines, who worked for Akin Gump, and Sharon Barner, an-ex Foley & Lardner IP partner who is now general counsel at Cummins, an engine manufacturer.

The two firms were closely followed by a pack of similarly prolific, and arguably better known names, including Skadden, Jones Day, and Latham & Watkins. 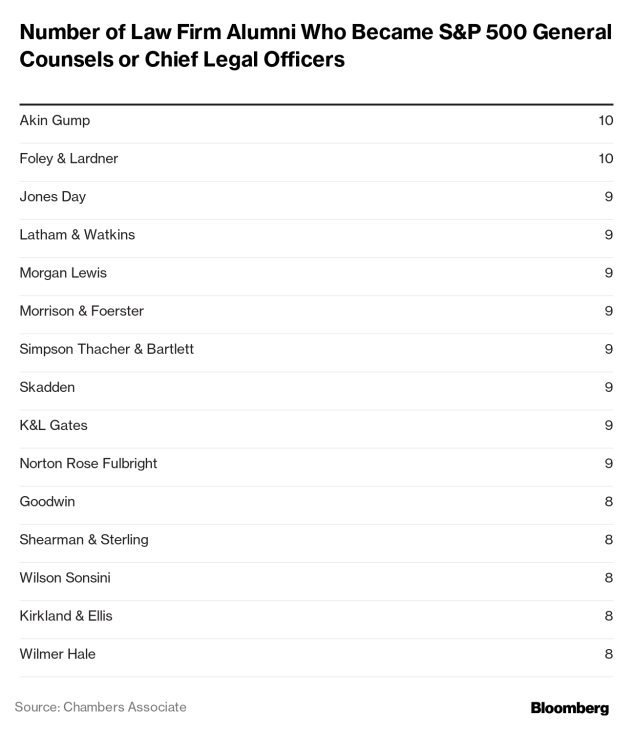 But it would be simplistic for us to imply that these firms are “better” because they produced more GCs. Many of the 500 GCs had experience at multiple firms, all of which could have been crucial, while larger firms have a clear numerical advantage. And who’s to say the “better” firm isn’t the one not losing its lawyers in-house?

A clearer result came about when we looked at the law school educations of the GCs. The dominance of Harvard is unsurprising, though the margin—it produced more than double the GCs of any other school—is remarkable. 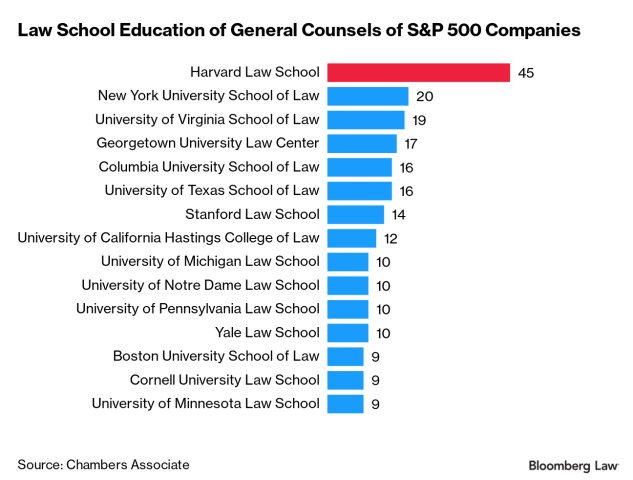 In previous research for Chambers Associate, we examined the popularity of a law school education among Congress. Harvard topped that list too. Those who believe a Harvard education merits this level of distinction may see no issue, but it does have the faint whiff of elitism.

Underneath all of these figures of course, there’s another story. In contrast to the die-hard loyals who make it to the top of private practice firms, GCs are still a mysterious, idiosyncratic bunch. Combing the career records of this lofty 500, it became clear that happenstance, good fortune, family ties, curtailed ambitions and mid-life crises were as much a factor in their career paths as any pin-point strategy.

Among this group you’ll find the wannabe partner who never made the grade, the freewheeling law-grad-cum-businessman; and the senior partner who trusted an in-house role rather than a gleaming new Porsche to spice up their life.

Between them, the 500 attended 122 different law schools and worked at over 200 different firms. General counsel is a role which values diversity of experience. That, in contrast to the table-topping feats of Harvard, Akin Gump and company, provides a reason for optimism among the young lawyers we write for.

Thomas Lewis is deputy editor of Chambers Associate, a publication providing students with a guide to America’s top law firms. His previous research has touched on the LSAT, law review, and the effects of globalization on law firms.