A technician works in a life sciences laboratory in San Francisco on Aug. 17, 2018.
Photographer: Cayce Clifford/Bloomberg via Getty Images

Class action securities claims against life science companies increased in 2019, and there’s no indication filings will abate in 2020. Dechert LLP attorneys examine emerging trends and offer best practices for companies to reduce the risk of being targeted.

Of these cases, the following trends emerged: 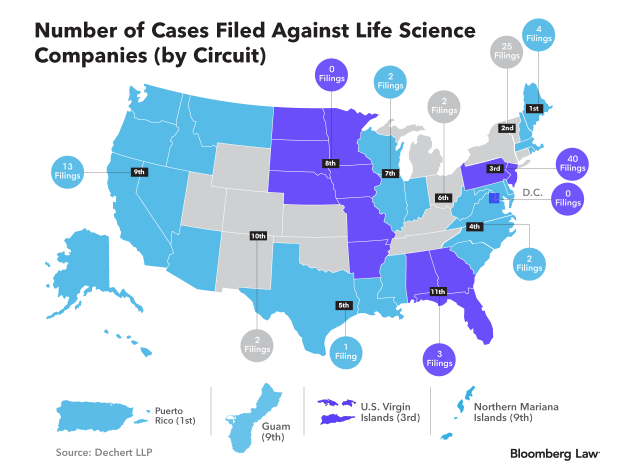 An examination of the types of cases filed in 2019 reveals continuing trends from previous years, with some additional developments:

In addition to an increase in filings, courts throughout the country issued a significant number of decisions in 2019 involving life sciences companies, including:

Given the numbers from 2019, there is no indication that the filing of securities claims against life sciences companies is going to slow down.

Further, the decisions in 2019 resulted in mixed outcomes. Of the 46 decisions rendered in 2019 that Dechert reviewed, 24 opinions decided in favor of defendants, while in 22 of the 46 decisions, the plaintiffs’ claims were allowed to proceed.

Reduce Risks of Being Targeted

David H. Kistenbroker is the global co-chair of Dechert LLP’s White Collar and Securities Litigation practice and managing partner of the firm’s Chicago office. His practice focuses on the defense of publicly traded companies and their directors and officers in securities actions, directors’ and officers’ liability actions, and related matters.

Joni S. Jacobsen is a litigation partner at Dechert LLP in Chicago. She focuses her practice on the defense of publicly traded companies and their directors and officers in securities actions, derivative actions, merger litigation, investigations, and corporate governance disputes.

Angela Liu is a litigation partner at Dechert LLP in Chicago. She focuses her practice on the defense of publicly traded companies and their directors and officers in securities actions, derivative actions and related matters.

The authors would like to thank associates James Kilduff, Tamer Mallat, and Steven Pellechi for their invaluable assistance in the preparation of this article.