The Sprint logo is shown on the side of the Fifth Avenue store in New York.
Don Emmert/AFP/Getty Images

It’s been almost a year since the proposed $26.5 billion merger of Sprint and T-Mobile, and it appears the DOJ isn’t impressed with the deal’s current structure. Dr. George S. Ford, chief economist of the Phoenix Center for Advanced Legal & Economic Public Policy Studies, looks at today’s antitrust climate and the chances of the deal being approved.

Nearly one year ago, Sprint and T-Mobile proposed a $26.5 billion merger of the third- and fourth- largest wireless companies in the United States.

Investors and analysts viewed the deal as a tough sell, in no small part due to the Justice Department’s and Federal Communications Commission’s disruption of the AT&T and T‑Mobile merger a few years earlier.

Recent media reports indicate that the Department of Justice (“DOJ”) is “not impressed“ with Sprint-TMO’s latest proposals and is unlikely to approve the deal as currently structured.

Remaining conspicuously silent is the FCC, perhaps hoping the DOJ spares it from making a challenging decision. Making matters worse, the attorney generals from 17 states appear ready to challenge the transaction.

The cards were stacked against the merger from the get-go. In 2011, the DOJ presumed the AT&T and T‑Mobile deal was “likely to enhance market power” because the deal’s impact on the Hirschman-Herfindahl Index, a measure of market concentration, far exceeded the 200-point presumptive threshold. The Sprint-TMO transaction increases the HHI by 400 points. A floundering Sprint offered cautious optimism, but the DOJ appears unmoved by such concerns.

Partly to blame may be the company’s peculiar t-shirt advocacy, but likely more significant is that merger simulations used to scrutinize mergers point to rising prices—including the models of merging firms’ own experts. Making matters worse, it is the disproportionately lower-income and wholesale customer bases of the merging firms that will bear the brunt of these price hikes.

Recognizing this evidence is against them, earlier this year T-Mobile promised no price increases for three years. Enforcing such a promise in an industry with complex pricing involving multiple goods and services presents significant challenges. Such enforcement may not be a good deal for consumers, perhaps blocking a price change that consumers prefer (e.g., reducing up-front equipment costs but raising service prices).

Also, the three-year promise pales in comparison to AT&T’s seven-year promise on Time Warner’s content prices—a promise that did not satisfy the DOJ. Even if T-Mobile extends its promise to seven years, the DOJ would be hard pressed to approve in light of the agency’s past behavior.

Bad timing may also be a problem as the deal is caught up in the “Hipster” Antitrust Movement that seeks to solve all social ills through merger policy, including job losses. While the companies claim the deal will increase jobs—thus countering the merger efficiencies that benefit consumers by lowering costs—estimates from other parties suggest the merger will reduce employment by 28,000 jobs. Whether the DOJ is prepared to abandon economic reasoning and embrace Hipster Antitrust remains unclear.

Challenges to the deal by state attorney generals is also a serious and perhaps underestimated problem for the deal. The AGs aren’t public service commissions; they challenge mergers under state antitrust laws. In 2017, California’s AG sued to block an acquisition in the oil industry the Federal Trade Commission let pass, leading the parties to abandon the deal due to the legal uncertainty of the challenge. State resistance to the merger, irrespective of the decisions of the DOJ and FCC, will likely delay, and potentially block, the Sprint-TMO merger. 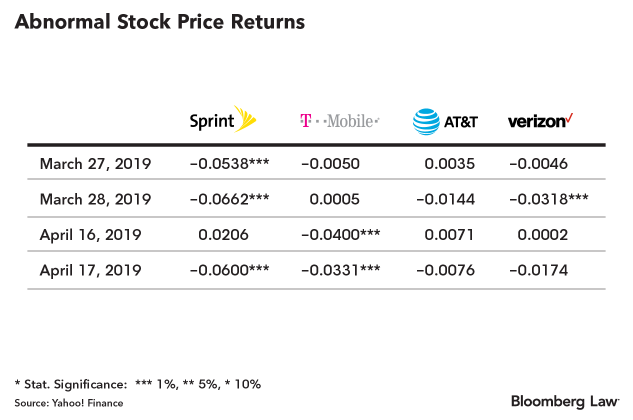 For the most part, the bad news is limited to Sprint and T-Mobile, and for T-Mobile only the most recent news proved material. Verizon’s stock fell on the first round of news (down 3.2 percent) and likewise on the second (down 1.7 percent), but the latter is only statistically different from zero at the 14 percent level.

The decline in Verizon’s stock price is consistent with a market power interpretation of the merger. AT&T, now well-past its own merger review, seems unfazed by the success or failure of the deal. The effect on Verizon but not AT&T may reflect the compatibility of mobile devices between the Sprint and Verizon (but not AT&T) networks. In all, it appears that investors have grave concerns about the approval of the merger or its terms.

Is the Sprint/T-Mobile merger done for? It’s hard to say.

News reports indicate only that the DOJ is unhappy with the Sprint-TMO deal as “currently structured,” suggesting a different structure may permit approval. Perhaps the news reports are the DOJ’s way of signaling that it is time to think seriously about restructuring the deal with stronger behavioral remedies.

What arrangements can be made to reduce the prospect of price increases are difficult to imagine, especially when DOJ Antitrust Chief Makan Delrahim holds behavioral conditions in such low regard. Whether there are acceptable terms is a mystery, but investors are plainly skeptical, perhaps acknowledging that the DOJ is only one of many parties that must approve the deal.

The FCC need not agree with the DOJ and resistance by state AGs could drag approval out for many months if not years, if ever. Earlier this month top telecom analyst Craig Moffett’s shop downgraded the merger’s approval prospects from a coin-toss to only a one-third chance—a change from bad to worse.

As the deal is in the “end game” now, we will all find out soon enough.

Dr. George S. Ford is the chief economist of the Phoenix Center for Advanced Legal & Economic Public Policy Studies, a non-profit 501(c)(3) research organization that studies broad public-policy issues related to governance, social and economic conditions, with a particular emphasis on the law and economics of the digital age.