Therium Capital Management CEO Eric Blinderman explains how successful litigation funders determine which litigation to fund and how they avoid investing in fraudulent matters, like the recent case of an attorney swindling a litigation funding company out of thousands of dollars.

A recent federal grand jury indictment in the Southern District of New York raised eyebrows within the litigation funding industry.

According to the indictment, an attorney attempted to swindle a litigation funding company out of thousands of dollars. That in and of itself probably did not raise many eyebrows. What surely did, however, was the fact that the attorney was successful.

The indictment alleges that the attorney fabricated a $16.5 million settlement agreement in a lawsuit against General Motors in which he was a plaintiff, and then apparently sought a bridge loan from litigation funders based on the fraudulent agreement. One funder was apparently persuaded by the meticulously drafted fake agreement—which included the forged signature of a GM attorney at Kirkland & Ellis LLP—and wired $30,000 to the attorney’s wife, who was also his fellow plaintiff.

As the U.S. CEO of a litigation and arbitration funding company that has financed over $36 billion in claims over the past decade, my first thought after reading about this indictment was: how in the world did this litigation funder let itself fall victim to this scheme?

Generally speaking, mistakes and pitfalls like this tend to occur when there are breakdowns or gaps in a litigation funder’s operations and due diligence systems.

Deciding Which Legal Matters to Fund

Here’s how successful litigation funders determine which matters to fund—and how they try to avoid the situation that this particular funder found itself in.

The decision to fund a particular legal matter begins, as you would expect, with a disciplined analysis of the case. Specifically: the likelihood of recovery, the anticipated amount of recovery, the timing of recovery, and the judgment of the attorneys who are either seeking funding or representing the clients that seek funding. 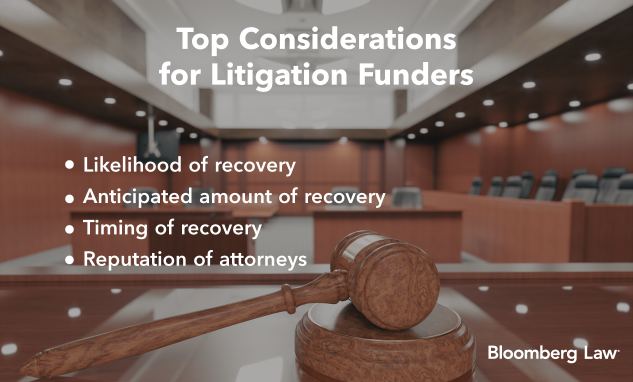 The most successful funders conduct this analysis thoroughly, systematically and from different angles. They gather their own intelligence about the parties through background checks and public records searches. They vet the claims’ merits by speaking with people involved in the case. They also verify the authenticity of key documents.

Additionally, these funders take into account other risks that the case may pose to the parties involved. For example, a matter may raise reputational concerns, for either the plaintiff or defendant, if certain information is made public during a lawsuit. Indeed, potential economic concern regarding the impact of a judgment on the ability of a defendant’s business to survive serves as a strong impetus for settlement. Good funders will identify and analyze such factors when underwriting a matter.

In evaluating any case, the identity of the attorneys is of paramount importance. The most successful funders determine not only whether the attorneys on matters they choose to fund are effective, but also credible and trustworthy.

They do this by reviewing the attorneys’ prior work and speaking with others in the legal community. Candor is important. I can tell you firsthand that funders prefer an attorney who speaks upfront about the challenges of a matter over one who immediately transitions to “sales mode” and refers to his or her matter as a slam dunk.

Challenges accompany each and every litigation and funders know that. The good ones see through attorneys who gloss over the potential pitfalls and fixate on the positives.

This due diligence process will likely take several weeks to complete. But even if a matter looks promising on its merits and has a strong legal team, successful funders will also consider a bevy of additional factors before deciding to fund it.

They look at whether they have experience backing similar matters. They determine their risk limits for a given matter. In other words, how much is a funder willing to put on the line, and possibly lose? They determine the damages-to-funding ratio that they are comfortable with when funding a particular matter. (Most funders are looking for a ratio of at least 10 to 1.)

Even after all of this due diligence and financial analysis leads to an affirmative decision to fund a matter, successful funders go even further to mitigate their risks—structuring their funding in ways that memorialize the ethical and professional obligations that a lawyer, claimant and funder must follow.

As litigation and arbitration funding becomes more widely accepted in the legal industry, more attorneys and litigants will seek funding for their matters. Funders that employ the processes I describe in this article are well-positioned to separate the good from the bad from the downright ugly.

Eric Blinderman is chief executive officer of Therium Capital Management (USA) Inc. He is a seasoned international and commercial litigator who, while at Proskauer Rose LLP, represented governmental and private entities in the U.S., Middle East, China, Europe, and Canada in complex litigations and international commercial arbitrations.