It’s a truth universally acknowledged among attorneys who represent employees that arbitration is bad for employees and very good for employers.

Earlier this year, I joined other women trial lawyers for the American Association for Justice’s Women’s Lobby Day in Washington, D.C., to advocate on behalf of the Forced Arbitration Injustice Repeal Act (FAIR Act), which would make unenforceable pre-dispute arbitration agreements between employers and employees or independent contractors “arising out of or related to the work relationship or prospective work relationship between them.”

Despite anecdotal accounts of the heavy price American workers pay when forced to forfeit their right to go to court, data analysis of arbitration outcomes is elusive. Private for-profit arbitration companies (ACs) have little incentive to rock the boat that keeps them sailing upon lucrative commerce waters, and employers reap the benefits of a secretive and grossly inequitable system.

Were it not for a handful of state statutes such as California Code of Civil Procedure §1281.96 and Maryland Commercial Law §§ 14-3901 to 3905, data driven visibility into the arbitration industry would be nil.

In California, private ACs are required by statute to “collect, publish at least quarterly, and make available to the public ….. a single cumulative report” of certain information from every consumer arbitration over the past five years. The information is supposed to be reported “… in a format that allows the public to search and sort the information using readily available software, and shall be directly accessible from a conspicuously displayed link on the Internet Web site of the private arbitration company with the identifying description: ’consumer case information.’”

But, even with these reporting requirements, data is not easily available. With the help of my associate attorney Mary Olszewska and expert statisticians Dr. Brian Kriegler and Melissa Daniel from EconOne, we parsed through five years’ (2012-17) of California employment arbitration data. Our results confirmed that the system is at best unfair and at worst rigged. 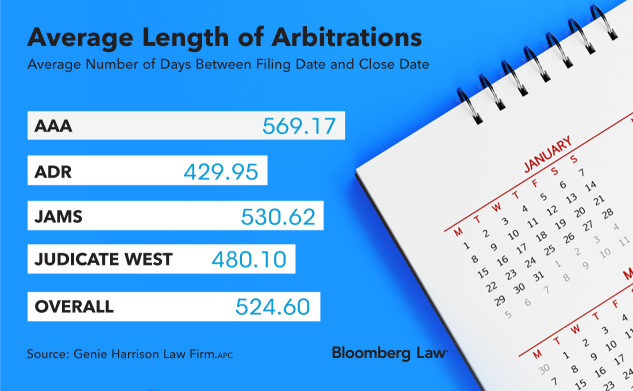 Our analysis of the 2012-2017 data shows that things have gone from bad to worse.

Consider AAA’s data about employment cases against Macy’s. From 2012-2017, AAA arbitrated 1,710 cases for Macy’s, almost 47% of its employment arbitrations. The other 1,936 non-Macy’s cases had a 7.5% dismissal rate; but Macy’s plaintiffs faced a 93% rate of dismissal. This flip cannot be explained by chance.

Each case generates thousands of dollars in employer-paid fees, excellent revenue for the ACs. Some employers arbitrate multiple cases each year with the same ACs.

The fact is that arbitrators and mediators have a direct economic incentive to favor defendants and defense firms that pay the bills.

Employers try to justify forced arbitration by, among other things, claiming it is fair and faster than litigation. Not in California. We found the average length of California employment arbitrations ranged from 14 to 19 months from the date of filing.
In comparison, according to California’s 2018 Court Statistics Report, civil unlimited cases from 2007-2017, which includes most employment cases, resolved at average rates of 75% within 12 months; 85% within 18 months; and 100% within 24 months. The length is the same for at least 85% of cases, whether in litigation or arbitration, and the remaining 15% are resolved only six months later than the longest arbitration date.

Adding insult to injury, arbitrators are not required to follow the law, and there is little opportunity to appeal an arbitrator’s ruling. Coupled with data analysis about arbitration outcomes, it is no wonder that the system seems so unfair.

In his landmark April 2018 Economic Policy Institute report, “The Growing Use of Mandatory Arbitration,” Cornell University professor Alexander J.S. Colvin had to poll employers rather than workers to determine the prevalence of employment arbitration “because research has found that employees are often unaware or fail to recall that they have signed arbitration agreements and may not understand the content and meaning of these documents.”

The Economic Policy Institute and the Center for Popular Democracy project that by 2024, almost 83% of the country’s private, non-unionized employees will be hashing out complaints like unfair pay and on-the-job mistreatment behind closed doors, an increase of 56% since 2017.

Despite recent moves by Google and some others to abandon forced arbitration clauses in employment and sexual harassment disputes, these clauses will continue to be the norm until the laws change. Having good data about arbitration outcomes is critical. Without this information, there is no way to identify repeat players, connect the dots, and use market forces to push toward fairer outcomes.

I used the data from my arbitration analysis to explain to legislators in D.C. that results from for-profit ACs vary significantly and can skew in favor of economic powerhouse repeat players. I shared the story of my client, Sandeep Rehal, formerly Harvey Weinstein’s personal assistant, who was required to sign a pre-dispute arbitration agreement at the time of hire by a company that knew Weinstein had been victimizing women for years, something Rehal didn’t know and the arbitration system hides by design.

The data show that arbitration is a secretive system that skews in favor of economic powerhouses and against employees, including in sexual harassment cases. The only antiseptic that will stop serial sexual harassers in employment is the public airing of their outrageous behavior. The FAIR Act is intended to create change by prohibiting employers from forcing employees into arbitration before disputes arise.

For too long we’ve given only lip service to change: No more. We must end forced arbitration, which keeps serial sexual harassers’ behavior secret and, at best, has delivered a slap on the wrist to people like Harvey Weinstein for far too long.