An automatic teller machine (ATM) is seen behind a fence at a Wells Fargo & Co. bank branch in Schaumburg, Illinois, U.S., on Tuesday, July 10, 2018.
Christopher Dilts/Bloomberg via Getty Images

Recent patent faceoffs in the financial services industry, such as USAA recently asserting its remote deposit capture patents against Wells Fargo, show the patent climate in the industry appears to be changing. But a larger question looms: Does the U.S. Supreme Court’s 2014 Alice decision make patent wars in this industry a losing proposition?

The Alice Corp. v. CLS Bank International decision held that abstract ideas cannot be eligible for patenting if they are implemented on a generic computer. That broad principle has been used to invalidate, or prevent the issuance of, swaths of business method and software patents where there is no technical solution to a technical problem or an improvement to computer technology.

While there is no shortage of questionable patents that issued pre-Alice, the more important question is whether financial service entities have issued patents likely to survive an Alice challenge, and whether such entities are obtaining new patents post-Alice.

I looked at issuance and allowance data from the top 10 patent holders in the financial services space and found that the answer is a resounding yes.

Contrary to popular belief, financial services entities hold many nonbusiness method patents, in areas such as security, document/image processing, optics, and cryptography. The data also revealed that three of the largest patent holders virtually stopped filing patent applications post-Alice. Those entities might rethink that strategy after seeing their competitors’ success obtaining patents in the post-Alice era.

Also, the allowance trend post-Alice shows that three out of seven financial service companies experienced an upward trend, three saw a steady trend, and only one saw a downward trend. In regard to each company’s Art Unit 3600 trend post-Alice, the sample size is too small to draw a conclusion (at least among these seven entities) but it appears that keeping new applications out of Art Unit 3600 translates to, at worst, a steady allowance rate post-Alice. Art Unit 3600 encompasses “business methods.”

The assumption that patent enforcement in this area is unlikely because the patents held by these entities are finance-related and thus Alice-vulnerable is wrong. Excluding all of the business method art units within Art Unit 3600 (and several likely suspects in 2600) reveals robust portfolios across the industry. 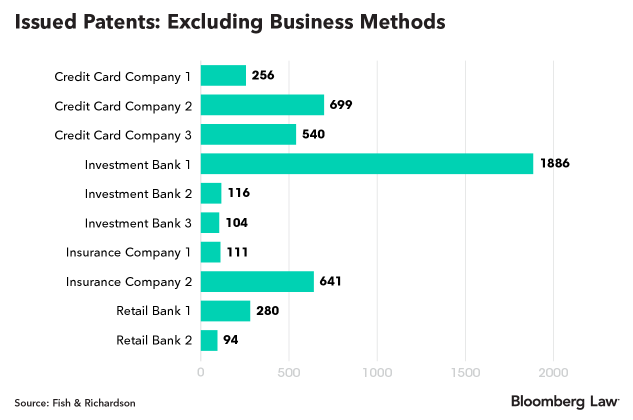 What technology do these nonbusiness method patents relate to? The data pertaining to the top 10 art units outside 3600 is quite interesting. Cryptography/security takes the lead, with a number of other traditionally “high-tech” art units not far behind. 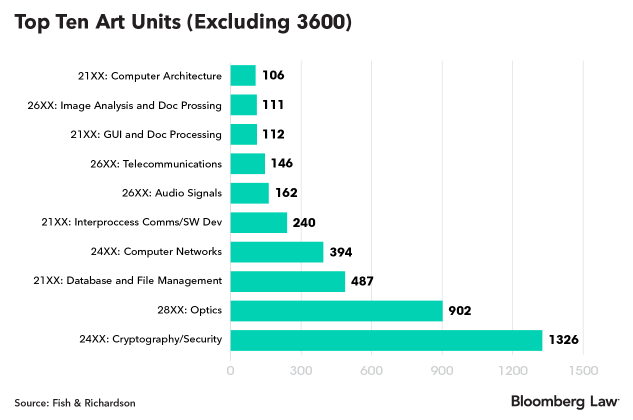 The possibility of a patent war in the financial services industry should not be discounted on the assumption that their patents are weak “business method” patents. The ammunition for war exists: The data show that patents continue to be issued to the industry post-Alice and that a substantial portion of existing portfolios falls outside the highly Alice-vulnerable Art Unit 3600.

I limited my review to the top 10 patent holders in the financial services space and considered the following data: (1) trends in patent allowance rate by year, (2) trends in the art unit assigned to new applications by year, and (3) the art unit composition of the issued portfolios.

The art unit is of interest because the most Alice-vulnerable applications get assigned to Art Unit 3600, which encompasses “business methods.” While a study by IP Watchdog posits that post-2017 Art Units 2100, 2400, and 2600 started to issue Alice rejections with some frequency, that frequency is still far less than in Art Unit 3600. As such, this article uses Art Unit 3600 as a proxy of vulnerability for patents issued pre-Alice.

Three final points on the data analysis. First, the identity of each patent holder has been anonymized. Second, patent application trends post-Alice were studied for only seven of the top 10 because three entities—two investment banks and one retail bank, all of which are household names—virtually gave up on filing patent applications post-Alice, leaving insufficient data from which to draw trends. Third, the USPTO does not make patent applications public until 18 months after their priority date. As such, certain patent application data are limited to applications made public as of approximately the date of this article.

Michael T. Zoppo is a litigation principal in Fish & Richardson’s New York office where he represents financial services entities in patent and trade secret matters. Zoppo is grateful to research librarian Chloe Abuzeni, who was indispensable in acquiring the data used in this article.

The opinions expressed are those of the authors on the date noted above and do not necessarily reflect the views of Fish & Richardson P.C., any other of its lawyers, its clients, or any of its or their respective affiliates. This post is for general information purposes only and is not intended to be and should not be taken as legal advice. No attorney-client relationship is formed.