Former New Jersey Gov. Chris Christie once told President Trump you can’t make a government investigation shorter. Jonathan A. Shapiro, of Baker Botts, begs to differ and highlights several ways to shorten them, including early assessment and speedy engagement with the government.

So it’s no surprise that a just-inaugurated Donald Trump sought Christie’s counsel on the “Russia Thing,” over a White House lunch on Valentine’s Day 2017. Predictably, Christie’s advice was swift, certain, quotable: “Christie said there was no way to make an investigation shorter, but a lot of ways to make it longer.” (See Mueller Report, Vol. II at Page 38).

Christie’s presidential advice was wrong. There are, indeed, ways to shorten government investigations, and passivity is not one of them. Clients often should accelerate the process because the mere pendency of an investigation is punishing (e.g., market overhang, team distraction, emotional toll and defense expense).

Speed also may promote a better outcome, if not a government walk-a-way, perhaps some fast and tolerable deal. (To be fair, the second part of Christie’s advice is clearly true, there are countless ways to make an investigation worse. Lying and shredding are classic examples—Martha Stewart, Enron—with government provocation-by-Tweet also reliably self-defeating—Tesla, PharmBro).

How to actually go about shortening the investigation, or trying to, is complicated. Credible communication with the government is key. Many investigations start as an overbroad, fire-drill subpoena, which may indeed be offensive regulatory overreach but also an invitation to sound out government priorities and start a lawyer conversation that, done right, will become reciprocal.

Early assessment of client exposure—not just legal risk, but market and reputational risk and shareholder and internal sensitivity—may allow counsel to front and frame complicated transactions and explain industry-specific practices before any investigator jumps to a wrong conclusion. 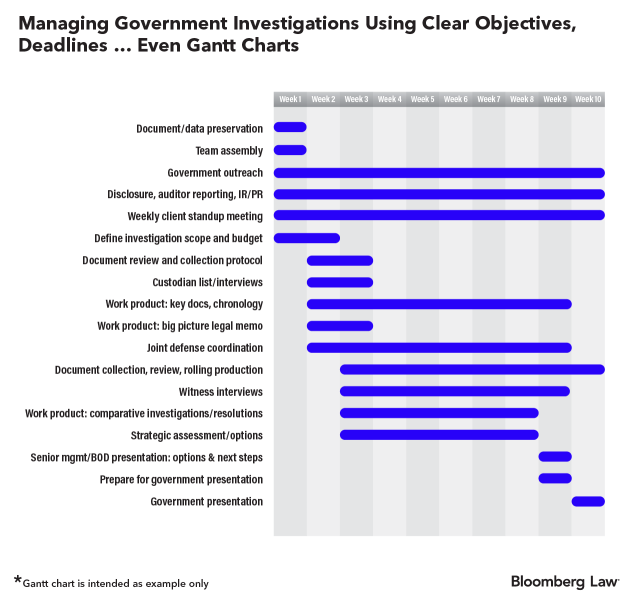 Counsel who quickly engage with the government may be able to get out ahead of ugly facts or documents that are inevitably coming out anyway, by bringing them forward in the most favorable context and earning trust and credibility with government officials.

None of this is risky. To the contrary, smart businesses manage investigations like any business problem, with clear objectives, deadlines, accountability, and even Gantt charts. We are beyond the discredited orthodoxy that anything started by the government somehow must be “cost insensitive,” impossible to predict and impossible to discipline. And moving fast almost always saves money.

There may still be some clients who really need rule-based advice, and Christie’s “no way” soundbite has the virtue of that simplicity. It is from the conventional defense playbook that Job No. 1 is to protect clients from (again) becoming their own worst enemy, as if that is inevitable.

Corporate leaders, however, are not presumed simpletons and complicated investigations rarely end well with one-size-fits-all solutions. Those under investigation should not uncritically accept “no way” passivity—because there are proactive and safe “ways” to shorten the process and from there shape the fate.

Jonathan A. Shapiro is the department chair of litigation in Baker Botts’ San Francisco and Palo Alto offices. His practice is focused on the defense of business and securities litigation and government enforcement actions. He has litigated class actions, challenges to corporate transactions and governance, and other matters regarding allegations of fraud and breach of fiduciary duty, including jury and bench trials.

Jonathan A. Shapiro
Baker Botts LLP
Write for Us: Author Guidelines
© 2022 The Bureau of National Affairs, Inc.
All Rights Reserved