Immigrants at a naturalization ceremony.
Bloomberg via Getty Images

The Trump administration’s focus on immigration has crowded the U.S. Supreme Court’s docket with an unusually large number of those cases this term.

The justices have typically heard between one and five immigration cases since the 2009 term, according to Bloomberg Law research. But they’ve agreed to eight this term—with more to add. 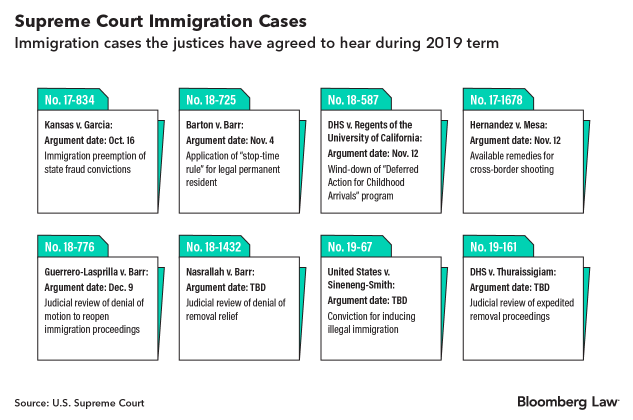 “Immigration has always been a hot-button issue,” but even more so under President Donald Trump, said Andrew Arthur, resident fellow in law and policy at the Center of Immigration Studies.

The “high profile of immigration as a policy issue in this administration,” the “large number of removal cases being processed,” and the “many innovative approaches to immigration enforcement by federal and state governments” has contributed to the glut, said U.C. Davis immigration law expert Kevin Johnson.

Those factors also have caused these cases to be more heavily litigated than under earlier administrations, Arthur said. This includes people challenging their removal, and states and progressive organizations challenging Trump policies.

This means the justices will have to sort out immigration cases touching on issues from expedited removal to identity fraud to judicial review.

And the “stakes are higher than ever because of the much greater enforcement environment,” said New York University immigration clinical law professor Nancy Morawetz.

The U.S. solicitor general, the government’s top lawyer at the Supreme Court, has brought three immigration cases to the justices, which is one reason for the higher caseload Morawetz said.

Those include DHS v. Regents of the University of California, the blockbuster litigation over the administration’s effort to terminate the Obama-era Deferred Action for Childhood Arrivals program; United States v. Sineneng-Smith, on the scope of a federal law prohibiting the inducement of illegal immigration; and DHS v. Thuraissigiam, on the ability of courts to review expedited deportations.

The justices have agreed to hear so many immigration cases at the solicitor general’s request in only one other of the past 10 terms, according to Bloomberg Law research. They heard three in 2017 brought to the court by the Trump and Obama Justice Departments, including over the legality of the Trump administration’s travel ban. Every other term, the justices have taken up one, or none, of the federal government’s cases.

She pointed to Sineneng-Smith as an example. The case involves a “little used statute” meant to enforce immigration law, which the U.S. Court of Appeals for the Ninth Circuit said impinges on free speech, Morawetz said.

The administration has chosen not only to take the issue all the way to the Supreme Court, but it wants the justices to read the statute broadly.

The Supreme Court is more likely to grant a request from the solicitor general’s office than from private parties, Morawetz said.

But Daniel Stein, of the Federation for American Immigration Reform, said courts are being overly aggressive, not the solicitor general’s office.

“Congress has abdicated its role” to make statutory changes to immigration law, and judges, “frankly, have decided to fill an activist role,” said Stein, who heads the anti-immigration group FAIR.

He and Arthur identified the DACA litigation as the most notable example.

Lower federal courts have said the administration failed to give adequate reasons why it wants to wind down the program, which has deferred deportation and provided work authorization for so-called Dreamers, those longtime U.S. residents who were brought to the country illegally as children.

Those courts have prevented the administration from terminating the program.

Barack Obama launched DACA through the Department of Homeland Security after Congress failed to pass legislation providing protection for Dreamers. The DHS under Trump should be able to wind down the program the very same way, administration supporters say.

By not allowing Trump to wind it down with the stroke of a pen, lower federal courts have shown an “unprecedented level of judicial activism,” Stein said.

Despite DACA’s potentially explosive political implications, most of the immigration cases the court has agreed to hear this term are more reflective of the kinds that it would normally hear.

And while Arthur said these cases are “really all over the map with respect to the issues they are considering,” taken together they could have a big impact on the immigration system.

Many involve technical issues about the 1996 amendments to federal immigration law.

Prior to those amendments, immigration judges decided many issues on a discretionary basis, Morawetz said. After, those cases turned on intricate legal questions that constrained judges’ discretion, she added.

Nasrallah v. Barr “could have the biggest impact of the non-DACA cases,” Johnson said.

Nasrallah, which hasn’t yet been scheduled for argument, involves a longstanding split among the circuit courts about how that bar applies in deportation cases involving certain immigrants fearing persecution in their home countries.

A reversal would make it easier for immigrants fearing a return to their home country to get a second look by a federal judge.

But the case could have broader implications for nearly all immigrants. The case’s focus on judicial review could impact how broad the term ‘fact findings’ is and could “have impacts on the review of virtually any removal case,” Johnson said.