Matthew Topic was named a Kirkland & Ellis partner in 2012. That’s right around the time he began looking for his next job.

Topic wasn’t a partner in the traditional sense—owning a nearly lifelong share of the firm’s annual profit pool. Instead, he was, in Kirkland lingo, “a non-share” partner. Some at the firm jokingly refer to the position as “PINO”—Partner in Name Only.

Using LinkedIn, state bar registrations, and other resources, Bloomberg Law in October was able to identify the jobs of 821 of the 840 non-share partners Kirkland has named since 2009 in an attempt to learn what the income partner designation means for a lawyer’s career.

These hard-working, non-share partners live in a sort of limbo—a solid step above associate status, but still well-short of achieving the coveted position of equity partner, where they are able to share in the firm’s largesse.

It’s an exchange that helps fuel the bottom line at one of the world’s richest law firms: Kirkland gets non-share partners’ blood, sweat, and tears, and billable hours. And in return, non-share partners bank on the experience and contacts gained at Kirkland in hopes that despite the significant blow of not getting coveted Kirkland shares, they can land well elsewhere.

“And nobody else has that engine,” he said. “No other firm.” 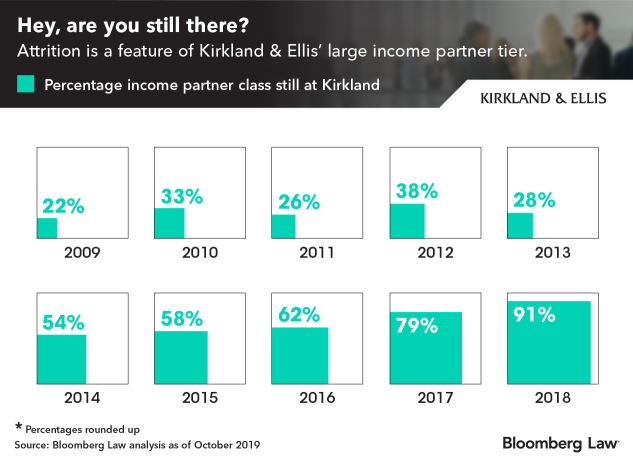 Kirkland, which declined to comment for this story, is not the only firm to have a non-share, or what other firms call “income,” partner track, but it’s arguably the most successful.

The average non-share partner at Kirkland will bill around 2,000 hours a year (or more) for at least half a decade before they are even considered for shares. That highly motivated workforce helps fuel an unparalleled financial machine that generated $3.76 billion in revenue last year, more than any other firm.

More than a half-dozen former Kirkland & Ellis partners spoke with Bloomberg Law to describe their transition out of the firm. Most spoke on the condition of anonymity because they continue to rely on the firm either for referrals or, in the case of in-house lawyers, as their company’s outside legal counsel.

About a year after one former Kirkland lawyer made non-share status, he said he decided to look around for new opportunities. He had been billing close to 3,000 hours a year as part of a major case handled by the firm, but he had family reasons for wanting to slow down.

Ultimately, he lasted about four years as a non-share partner. In the meantime, he said he was billing close to $2 million a year and making, at most, $500,000.

“I was a money maker for them,” said the partner, who declined to be named to protect relationships with the firm.

Earning a real financial share at Kirkland & Ellis as an equity partner was worth last year, on average, more than $5 million. That’s nearly 10 times what the firm paid its average non-share partner, according to the latest AmLaw figures.

Former partners at Kirkland described a range of emotions attached to departing the firm: Surprise. Disappointment. Galvanizing. Relief. Others, like Topic, described a more transactional relationship with the firm.

Topic turned his pro bono work at Kirkland fighting for Freedom of Information Act requests into a profitable practice at a small firm in Chicago. He has since made national headlines forcing the release of the Chicago Police Department’s video showing the shooting of 16-year-old Laquan McDonald, leading to city police reform.

“I’ll have ‘Kirkland partner’ on my resume for the rest of my life,” Topic said. “It’s a great network, and they take very good care of alumni.”


Kirkland has had an unmatched decade of financial performance. During a post-recession time of broader upheaval in the industry, Kirkland’s revenue has nearly tripled to make it the largest law firm in the world by revenue. Kirkland was the second-most profitable firm last year when its 430 share partners brought home $5 million on average—the second most among any firm, according to AmLaw.

But if you add the firm’s 566 non-share partners to its profitability analysis, Kirkland’s partners each take home an average of $2.5 million. That’s good for No. 22 on the latest AmLaw charts.

At Kirkland, about one in four lawyers is a non-share partner, which is an unusually high share for such a profitable firm. A large share of non-equity partners is usually indicative of a lower-profit firm.

The income partner title has proliferated across Big Law firms. In 2000, 22% of all partners in the AmLaw 200 were of the income variety. By last year, that number had risen to an all-time high of 43.5%, The American Lawyer reported in July.

At many firms, the non-equity tier is a costly result of bloat and indecision. The lawyers have no clear path to the real partnership because there is not enough work for them and they haven’t proven themselves to be rainmakers who can bring in new clients. But firms historically don’t like to fire lawyers.

But Kirkland’s roster of private equity clients, blue-chip public companies and its top-tier restructuring practice have instead turned the non-share tier into a profit center. Non-share partners aren’t expected to bring in new clients; they are expected to work hard or develop close relationships with the firm’s major clients.


A Reason to Bill


Making the first partner tier seems like a day worth celebrating, but some partners don’t even remember how they heard the news. (Usually, a phone call from a senior partner in their practice group.) Most partners felt like it was just a warm-up for the real challenge: Making shares.

“The most stressful time of someone’s career at Kirkland are the last couple of years before the equity promotion is coming,” one former Kirkland lawyer said.

So why stay at Kirkland? That’s a question the firm poses to its own lawyers. One answer is the financial incentive. Freshly minted share partners will make about $1.8 million in their first year as owners, recruiters said.

“It is a life-changing event if you make equity there,” one former Kirkland lawyer said. “I can’t overstate that. You are going to make millions of dollars for several years.”

And yet, everyone knows the odds are stacked against them. One way the firm keeps lawyers motivated, former partners said, is by being vague about their chances of making partner.

Non-share partners go through an annual review process that partners described as brief and often cryptic. Nothing is explicit, but the firm makes indications about where a lawyer stands, the partners said.

Another former partner who stayed as a non-share partner for three years said the range of conversations included, for some, a deadline of when the lawyer needed to find a new job. But for the majority of lawyers, he said, the message the firm’s partners would relay is that if you work harder or do better work you have a shot at shares.

Asking high-achievers to continue to defy the odds serves as a motivational tactic that former partners say keeps the workforce engaged and competing to bill more than their peers.

“Once they stop believing, they don’t work as hard and then it’s time to go,” Jungers, the recruiter, said. “But the reward is so great, and the people are largely of a certain type, that they want that.” 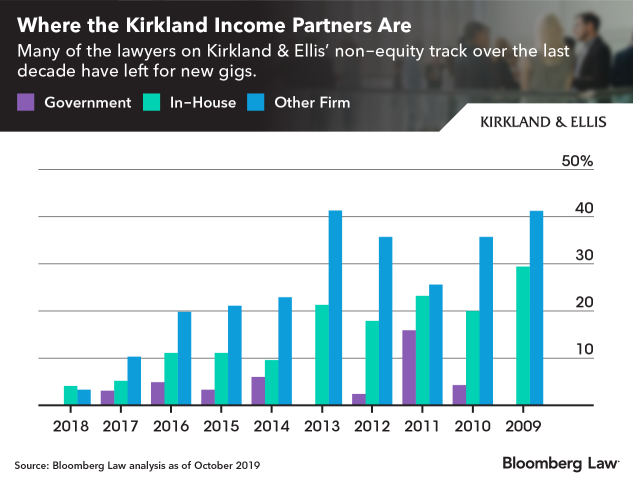 
One difficulty for the non-share partners is that what it takes to make share partner is not as cut-and-dry as the objectives they have accomplished to that point. Getting good grades, billing long hours and handling the legal work put in front of you is one thing. Making relationships with outside counsel and playing internal politics is another.

“The expectation is not to hustle,” one former partner said. “It’s instead to develop deep connections with your in-house peers so that when those people rise up within institutional clients or other in-house places, they look to you and trust you thanks to years of working with you.”

Gender disparities can also pose challenges, as they often do in Big Law. According to Bloomberg Law’s analysis of the last decade’s partner classes, far more male associates made non-share partner in the first place than female associates, at 68% versus 32%.

Regardless of gender, Kirkland’s non-share partners can also have difficulty finding another law firm willing to make them partners. That’s because Kirkland gives out the “partner” title before most other firms, and also because the non-share partners don’t usually have their own business to bring to a new firm.

Still, about a quarter of the lawyers that made non-share partner over the past decade have gone on to find a role at other firms. As of October, they worked at 122 different firms including Paul Weiss, Quinn Emanuel, and Sidley Austin. Sidley, another Chicago-founded firm, has hired 16 of those Kirkland non-share partners, twice more than the next closest firm, Honigman, which has been building an office in Chicago.

“What we’re getting are lawyers who are coming up, they’re entrepreneurial and they’re interested in managing their own destiny,” Foltyn said. “They’re not interested in being the third or fourth person on a team where they have no control.”

Often, Kirkland’s non-share partners transfer as a non-equity partner or a counsel to those firms.

“You are somewhat limited depending on your humility,” one former partner said.


The firm in recent years has invested in an alumni program that gives former Kirkland lawyers and those looking to leave the firm access to job coaches, job listings, and other materials to prepare for interviews. The firm says its alumni are “colleagues for life,” and last year it extended a pared-down version of its personal concierge service to many former lawyers.

There is a major effort to get alums jobs in-house, with about 14% of the past decade’s worth of non-share partners landing in the space. They populate legal departments of some of the country’s largest companies: Apple Inc., Intel, Boeing, McDonald’s, AbbVie, Johnson & Johnson, Amazon Corp. The list goes on. Kirkland says it has more than 4,400 alumni working at more than 2,400 companies worldwide.

“Kirkland gave me what I wanted,” says one former partner. “It gave me the money I needed at the time. And it gave me the springboard to where I am now. But it was a fairly harrowing route it took trying to get out. It was a little more difficult than I imagined coming from a good school, a great firm.”

Another former partner who now works at an AmLaw 100 firm said the day he was told he wouldn’t make equity partner was “the worst and best day” of his professional life.

“You wanted to make it,” he said. “You wanted to be part of the club and know you have what it takes. And you’re getting the feedback that you don’t. That’s obviously incredibly painful.”

But he said facing that adversity also helped him grow as a lawyer and a person. He has satisfaction knowing he built his own business rather than handling work from the firm’s clients.

“I was forced to get out of my comfort zone,” he said. “Looking back on it, it gave me a certain sense of freedom.”

—With assistance from Meghan Tribe