Just two years after leaving her role as a U.S. Department of Justice lawyer, Ashlee McFarlane stepped into what would become one of the biggest catalysts of nationwide protests for social justice.

McFarlane represented Maurice Hall, one of two passengers in the car when George Floyd was stopped by police in Minneapolis. Hall, who said Floyd wasn’t resisting arrest, was himself arrested in Houston days after Floyd’s death and subjected to a lengthy interrogation.

McFarlane, a partner at Gerger Khalil Hennessy & McFarlane LLP in Houston, criticized authorities in national media for how they handled the case, including telling The New York Times in June that “Even with outstanding warrants, this should have been done another way.”

Her representation of Hall reflects her decision to switch from prosecuting white-collar crimes to defending those who are facing the “enormity” of the federal government.

“I enjoy being able to stand for people in some of their darkest moments and fight for them,” she told Bloomberg Law in November.

McFarlane’s successes include defending a former CEO who was facing an investigation by the Securities and Exchange Commission over the company’s activities in Nigeria and representing a physician whose investigation by the Texas Medical Board ended without a negative finding, according to the firm’s website.

She says that the impression often painted of defendants doesn’t match up to reality. Many white-collar defendants are “everyday folks who are your neighbors,” according to McFarlane. 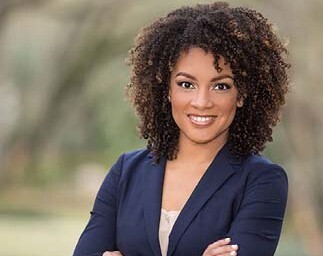 Working on this side, she says, she really gets to know people and sees their daily experiences of facing a federal prosecution.

McFarlane worked as an assistant chief in the Department of Justice Criminal Division before she joined what was then called Gerger, Khalil & Hennessy—the firm added her as a name partner in June 2018. According to the firm’s website, she was the youngest person to have held the role at the DOJ.

Among her government service accolades are the Health and Human Services inspector general’s Award for Integrity, IRS criminal investigation’s Recognition for Outstanding Support, and the assistant attorney general’s Award for Distinguished Service.

McFarlane says she’s passionate about women in law and ensuring women have the tools, knowledge, and ability to ensure equal pay and build a robust practice. She serves on the board of the Houston Association of Women Attorneys, the Texas Civil Rights Project, and is a member of the Women’s White Collar Criminal Defense Association.

While in law school, she says she wanted to learn and hear from people who “walked the path before” her.

“I feel strongly in returning the favor,” McFarlane, a graduate of Spelman College and Vanderbilt University Law School, said.

Her advice to up-and-coming attorneys is to focus on building skills and finding opportunities to be in the courtroom, or on certain cases. McFarlane said it’s also important to build a network and be aggressive in trying to meet and connect with people.

“When I look back on my career, those are the two things I think that really helped me and allowed me to move from phase to phase,” she said.

McFarlane enjoys history and says she likes to study the economic development and progression of African Americans in the U.S.

She spends much of her free time with her husband, children, and pet dog in Houston, where she’s lived for the past 10 years.