When Hogan Lovells launched a global privacy and cybersecurity practice group in 2010, the law firm dipped its toe in the developing legal territory with seven attorneys. A decade later, the group has grown to nearly 60 lawyers and helped the firm gain a foothold in a rapidly emerging market for legal services.

That’s thanks largely to the vision of firm CEO Steve Immelt, according to practice group chair Marcy Wilder.

“He saw the opportunity,” Wilder said. “When others saw it as a fad, he fully backed it.”

As Immelt prepares to step down Wednesday and hand the reins over to Miguel Zaldivar, Hogan’s latest challenge is the unprecedented health care and economic crisis swept in by the coronavirus pandemic.

Hogan has rolled out a series of pay cuts and furloughs, including reductions in U.S. equity partners’ monthly draws by up to 25%. Several firms are trimming back in response to the pandemic, but Baker McKenzie is the only other firm in the AmLaw top 10 reported to have announced pay cuts involving U.S. attorneys.

Still, Immelt expressed confidence in the path he’s charted for the firm as he prepares to officially step down July 1.

“I feel good about where we are,” said the Washington-based litigator, who spoke with Bloomberg Law in two wide-ranging interviews. “We’ve made investments ahead of the curve that are now paying off.”

Immelt’s tenure has been characterized by a calm demeanor and steady approach that helped solidify a transatlantic merger and target growth in practice areas like privacy and cybersecurity, as well as life sciences.

Zaldivar began signaling about three months ago that he wants to effect broad changes at Hogan, including adjustments to its management and practice group structures. Those moves are aimed at streamlining practice structure and speeding decision making, the firm said in an announcement.

Hogan did not make Zaldivar available for an interview.

He said in an email to Bloomberg Law that the firm’s “overall strategy” has not changed because of the pandemic. Zaldivar also said he plans to bolster private equity and M&A groups in New York and London, two of the more highly competitive and profitable practices within leading firms.

Immelt, 68, was the co-head of Hogan’s litigation and arbitration practice before becoming CEO in 2014. He joined Hogan & Hartson in 1989, before the firm merged with U.K.-based Lovells, quickly building a practice handling health care-related litigation.

He comes from a family of legal and corporate leaders. Immelt’s younger brother, Jeffrey Immelt, retired as CEO and chairman of in 2017, after a 16-year run.

The elder Immelt said the legal industry has faced several international imbroglios in the years he’s led the firm, such as Brexit and the ongoing trade tensions between the U.S. and China. Yet none have been quite like the coronavirus pandemic—a public health and economic tsunami.

Major infrastructure and technology investments Hogan made over the last half-decade eased its shift to remote work as offices closed, Immelt said. Some three-quarters of the firm’s 6,600 employees across 24 countries are now working from home.

At the same time, Immelt said he’s tried to allay concerns from clients as the impacts of Covid-19 became clear. He said he initially focused those talks on basic questions—"What do we know? What are the options going forward?"—and attempted not to overreact.

“Stay calm and be measured,” he said.

It’s the same attitude that those who know Immelt say has propelled his leadership.

Other legal industry leaders tend to “beat their chest” about their firms’ accomplishments, Kent Zimmermann, a partner with the law firm consultancy Zeughauser Group, said. Immelt, instead, maintains a more even-keeled demeanor.

Immelt’s tenure as CEO has not been without hiccups, according to a current Hogan partner and former firm lawyer who asked for anonymity in order to speak freely.

He could have focused more directly on making prominent “get” hires, to keep the firm among the hottest Big Law destinations, the pair said. Other firms, such as Kirkland & Ellis and Paul Weiss, have repeatedly sought out “star” lateral hires, in part to further a cycle of attracting more of them.

Yet Immelt and others note that the firm made a number of smart new partner hires through individual lateral and group moves, and in some cases by combining with smaller firms, like it did in 2017 with Collora, a life sciences-focused firm. That tie-up gave Hogan an opportunity to open a new Boston office, and perhaps more importantly, to bolster an existing practice group strength, said Zimmerman.

The firm’s reported annual gross revenue has jumped by 26% to nearly $2.3 billion over the last five years. Revenues have ticked up by nearly 4% in 2018 and more than 6% last year.

Profits per equity partner also rose to just more than $1.5 million, a 24% increase, over Immelt’s tenure. That’s bigger than the 14% bump that partners saw at Baker McKenzie over the same period, but less than the 46% spike in partner profits at Norton Rose Fulbright, two firms that also have high lawyer headcount and extensive global reach. 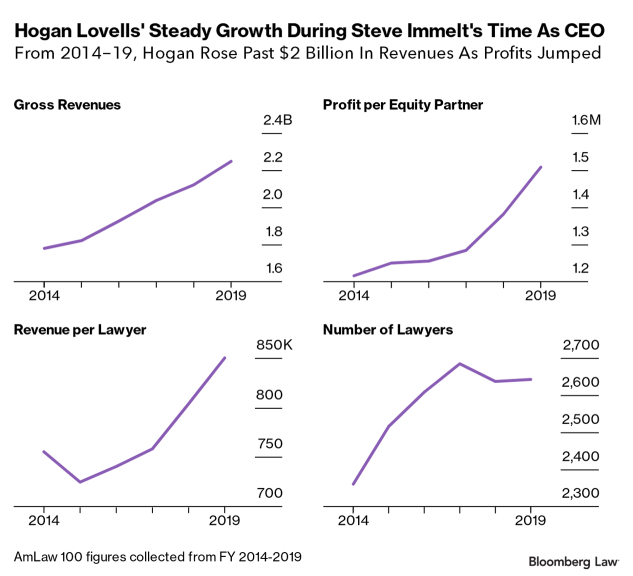 Hogan’s AmLaw rankings have remained steady over the last six years, hovering in the top nine based on revenues. Its reliable growth came as fortunes varied for other huge firms, led by an astonishing 93% spike at Kirkland & Ellis.

‘Putting the Merger to Bed’

Consultants and other long-time observers say that both Hogan & Hartson and Lovells benefited from the firms’ 2010 transatlantic merger. H&H had been seen as a high-quality firm with especially strong practices connected to Washington, including regulatory work, while Lovells had broad reach in Europe.

By forming a single firm with a much larger footprint than either had individually, observers say the combined firm has been better able to retain top corporate clients and withstand the ups and downs in the global economy.

Transatlantic tie ups are not easy to pull off. Take, for example, the attempt to combine the British Magic Circle firm Allen & Overy and American firm O’Melveny & Myers, a deal that failed to get off the ground. Or the merger of London-based Clifford Chance and New York’s Rogers & Wells, which reportedly suffered and caused a drain on talent because of difficult-to-resolve issues over compensation and partnership.

Immelt, who was a partner at the time of the merger, is credited with helping make two firms one after becoming CEO four years later. He helped unify the firms’ cultures, pay systems, and leadership structures, according to several Hogan partners.

“His greatest accomplishment was thoroughly putting the merger to bed,” said Bruce MacEwen, a principal with the law firm consultancy Adam Smith, Esq. For years after the combination, Smith said most lawyers within the firm continued to identify as “either a Hogan & Hartson person, or a Lovells person. That definitely has changed.”

Immelt said frequent trips to the firm’s London office and many of its 47 other outposts helped guide him in developing strategic geographic growth plans for the firm. He said he knew early on: “We have a partnership with a global reach, but we don’t have to be in every country.”

Hogan has expanded by combining with smaller firms, or opening new offices, four times since 2014, according to a spokeswoman. That includes moves in Boston, Minneapolis, Sao Paulo, Mexico City, and Monterrey, Mexico.

Other leading global firms, like Norton Rose and Dentons, have been more aggressive about expansion over the same time. Dentons opened new offices, or “combined” or otherwise tied-up with other firms in at least 38 instances during the same time period, according to the firm’s website.

Immelt has focused on expanding in areas where the firm is already strong, like Germany, China, and Silicon Valley, Hogan’s head of global M&A practice Bill Curtin told Bloomberg Law.

“He recognized these as regions where we can provide best-in-class legal services,” Curtin said, rather peppering offices in new locations simply to plant the firm’s flag.

For his part, Zaldivar nearly three months ago announced various moves designed to simplify the firm’s structure and speed decision-making.

The firm will strengthen the “engines” of the firm’s offices in Washington, London, and throughout Germany, Zaldivar told Bloomberg Law via email. He’s also looking to further expand in New York, California and Texas—as well as in Greater China, which “will obviously continue to be a priority for our firm,” the Hong Kong-based lawyer said.

“I don’t see a need to alter our ‘slow but steady’ approach that has worked so well for our firm.”