The US Supreme Court heads into the homestretch of the term with more than half its work incomplete and blockbuster opinions on abortion and gun rights coming as well as decisions on administrative law and immigration.

With 33 decisions in argued cases outstanding, the court has surprisingly opted not to issue opinions this week. The departure from usual practice that wasn’t explained puts more pressure on the justices if they plan to meet their customary term-ending deadline.

Though a heftier lift than in recent years, the Roberts Court has a tradition of getting out all of its cases by the end of June. That’s slipped to the first week of July during the pandemic. 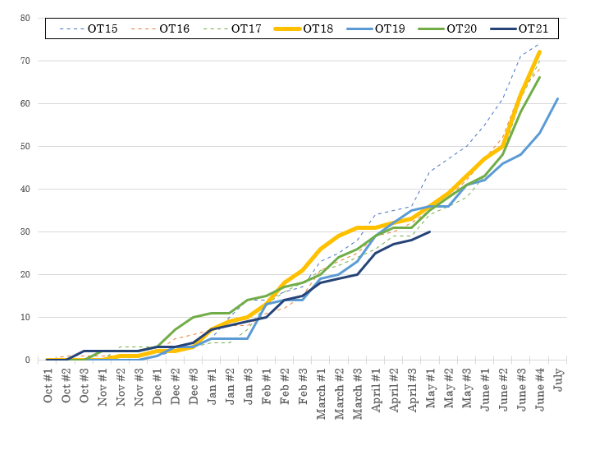 Pace of US Supreme Court opinions in terms 2015-21
SCOTUSblog

The court’s oldest outstanding case is New York State Rifle & Pistol Association v. Bruen, a Second Amendment dispute. The conservative majority at argument in November signaled it was ready to rule that most people have a constitutional right to carry a handgun outside the home, casting doubt on a state law that requires a special justification to get a permit.

Also on tap is the term’s marquee case on abortion rights out of Mississippi, Dobbs v. Jackson Women’s Health Organization.

A May 2 leak of a draft opinion striking down the court’s landmark ruling in Roe v. Wade followed argument in December when the court’s conservatives suggested they are poised to roll back abortion rights and uphold Mississippi’s ban after 15 weeks of pregnancy.

While abortion and guns capture the most public attention, there are other cases on the docket that in any other term would be the ones making headlines. A pending environmental dispute in West Virginia v. EPA could upend the agency’s ability to deal with climate change. The justices at argument in February delivered a mixed response to Republican-led states and coal companies seeking to bar EPA from issuing a sweeping plan to reduce power plant emissions.

The justices are also considering other cases that could hamstring administrative agencies, which touch almost every aspect of American life, further protections for religious groups, and force the Biden administration to reinstate a Trump-era rule requiring would-be immigrants to stay outside the US while their cases are reviewed. The court at the April argument in Biden v. Texas questioned President Joe Biden’s effort to rescind the so-called “remain in Mexico” policy.

There are other disputes on the emergency, or shadow, docket that weren’t argued but also are due to be decided. 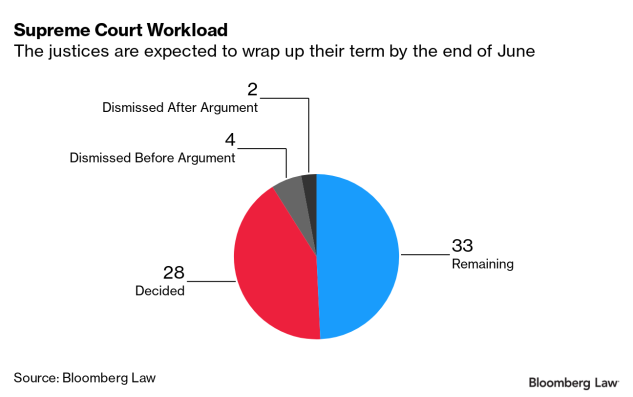 When deciding who will write rulings for the court, the justices typically try to spread out opinions evenly.

That means Justices Clarence Thomas, Samuel Alito, and Brett Kavanaugh likely have the most majority writing work outstanding. As of last week, each had released only two majority opinions out of an expected six or seven for the term.

Chief Justice John Roberts and Elena Kagan have issued the most opinions so far, with four each. 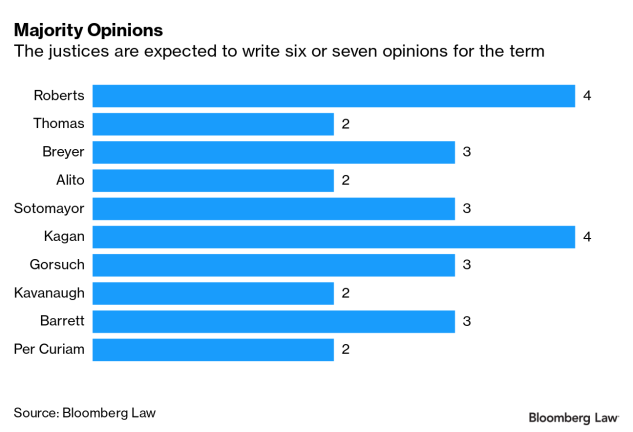 The justices are typically unanimous in just under 50% of their cases, according to SCOTUSblog. However, they’ve only issued nine unanimous rulings, or 32% so far this term. That’s largely due to a high number of 8-1 splits compared to previous terms. The justices have done that seven times this term, with Thomas being the most frequent solo dissenter.

The justices have split 6-3 in as many cases as they’ve been unanimous, with most dividing along ideological lines. The court has also split 5-4 three times, with conservatives Roberts, Kavanaugh, and Justice Neil Gorsuch switching sides to join their liberal colleagues—sometimes in dissent, other times in the majority.

Because the most divisive cases typically take the longest to finalize, the term could wind up being particularly bumpy. That’s troublesome for the justices, who like to point to unanimity as evidence that they aren’t “politicians in robes.”

Roberts and Kavanaugh continue to be at the center of the conservative-majority court as the only ones in the majority in every case decided so far this term.

The three liberal justices—Stephen Breyer, Sonia Sotomayor, and Kagan—have been in the majority the least. Each appear in the majority fewer times than all of the conservative justices.

Court watchers are looking to see how they frame dissents in the big cases expected to go the way of the conservatives, especially Breyer as he wraps up nearly three decades on the high court.

—With assistance from Bloomberg’s Greg Stohr