The U.S. Supreme Court could act as soon as Monday on an array of calls to consider expanding gun rights, including appeals that seek a nationwide right to carry a handgun in public.

The justices are considering a list of 10 appeals that would bolster constitutional firearm protections -- something that, to the frustration of gun-rights advocates, the court has repeatedly refused to do for the last decade. With new Justice calling for the court to schedule a new Second Amendment case soon, the balance may be poised to tip.

In addition to appeals on public handgun possession, two cases call for the constitutional right to own a semiautomatic assault weapon. Others would tackle a California gun-safety law and the federal ban on direct interstate sales. If the justices grant review, they would probably hear arguments just after the November election and a presidential campaign in which President ’s support for gun rights could be a key issue.

“They just need to step up and make a choice,” said , a Washington appellate lawyer who often argues on the side of gun rights. “Are they or are they not actually going to treat the Second Amendment as a constitutional right?”

The court could add new cases to its calendar when it issues a list of orders Monday at 9:30 Washington time.

The court hasn’t issued a major gun rights ruling since 2010, when it said the Second Amendment applies to states and cities, as well as the federal government and the District of Columbia. That followed a 2008 ruling that for the first time said people have a constitutional right to keep a handgun at home for self-defense purposes.

The top candidates for review may be three appeals that ask the court to rule that the Second Amendment applies outside the home as well. Federal appeals courts upheld laws in Massachusetts, New Jersey and Maryland that sharply limit who can get a permit to carry a handgun in public.

Those three are among seven states that bar people from carrying a handgun for self-defense purposes unless they can show a specific reason they need one. The others are California, New York, Hawaii and Rhode Island. 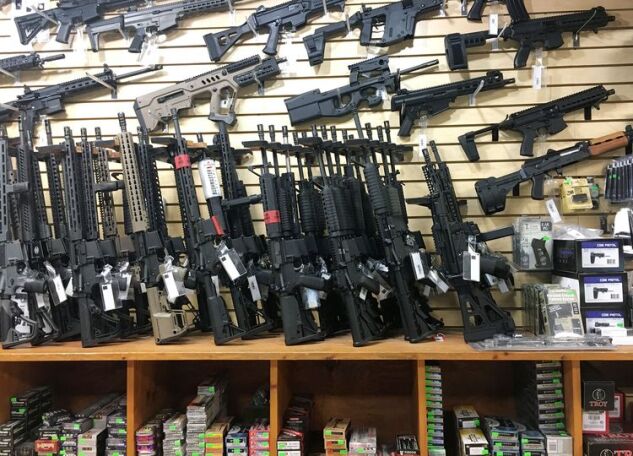 Semi-automatic rifles on sale at a store in Nevada.
Photographer: Robyn Beck/AFP via Getty Images

The right-to-carry issue has created the kind of split among federal appeals courts that often prompts the Supreme Court to intervene. Although most appellate courts to consider the subject have upheld state restrictions, a federal appeals court in Washington, D.C., threw out the district’s requirement that residents show a “good reason” to get a carry permit.

Yett it’s not clear how much controversy the court will want in a term that starts weeks before the election and already includes a showdown over .

“One thing that the justices might be considering is their appetite for a highly charged issue right now,” said Eric Ruben, a professor who focuses on the Second Amendment at Southern Methodist University’s Dedman School of Law. “The public-carry cases and the assault weapons cases are more polarizing than the federal ban on selling handguns directly to out-of-staters.”

The court has two options on assault weapons, including a challenge to a Massachusetts ban that also includes a prohibition on large-capacity magazines. The second case concerns a similar law in Cook County, Illinois, which includes Chicago.

A potentially less divisive appeal challenges the federal law that bars dealers from selling handguns directly to people in other states. A Texas gun dealer is seeking to sell handguns to two District of Columbia residents without having to use a middleman who charges $125.

The Supreme Court also could agree to hear a challenge to a California law that critics say effectively bans the sale of new handgun models. The law requires new handguns to create a microscopic stamp on each fired shell casing to indicate the make, model and serial number of the weapon. The challengers say that provision is so demanding that no manufacturer can meet it.

Both the interstate-sales case and the California microstamping clash offer “nice narrow questions that give the court a chance to step in but in a limited way,” Jaffe said.

All of the appeals were put off while the justices considered another relatively narrow case over restrictions New York City had imposed on transporting licensed handguns. The justices the case on April 27 without ruling on the merits after the city and state changed their laws.

That decision was a setback for gun-rights advocates, though perhaps only a temporary one. Kavanaugh backed the decision to dismiss the case, but he added in a separate opinion that lower courts “may not be properly applying” the Supreme Court’s gun-rights precedents.

“The court should address that issue soon, perhaps in one of the several Second Amendment cases with petitions for certiorari now pending before the court,” Kavanaugh wrote, using the formal name for appeals that seek Supreme Court review.

Kavanaugh could provide the necessary fourth vote to hear one or more of the appeals, joining the three justices -- , and -- who said they would have ruled in the New York case.

Thomas has made no secret of his frustration that the high court hasn’t been more assertive in protecting gun rights.

“As evidenced by our continued inaction in this area, the Second Amendment is a disfavored right in this court,” Thomas wrote in 2018.

Should the court take up a new case, the pivotal vote probably would belong to Chief Justice . He was in the majority in the 2008 and 2010 rulings but hasn’t indicated any eagerness to take on follow-up issues.