Whistleblowers hoping to expose fraud by drug companies and federal contractors sometimes see the Justice Department push to dismiss their cases without explaining why.

A bill (S. 2428) by Sen. Chuck Grassley (R-Iowa) to amend the False Claims Act, introduced July 22, would make it harder for the DOJ to end a whistleblower’s FCA case when federal prosecutors say it is meritless, wasteful, or contrary to federal policy.

The FCA says the DOJ may at any point move to end a whistleblower’s action that it doesn’t support, over the whistleblower’s objection, by giving notice of a motion to dismiss and an opportunity for a hearing on the motion.

If enacted, the False Claims Amendments Act of 2021 would burden the DOJ with “demonstrating reasons for dismissal, and the qui tam plaintiff shall have the opportunity to show that the reasons are fraudulent, arbitrary, and capricious or contrary to law.” 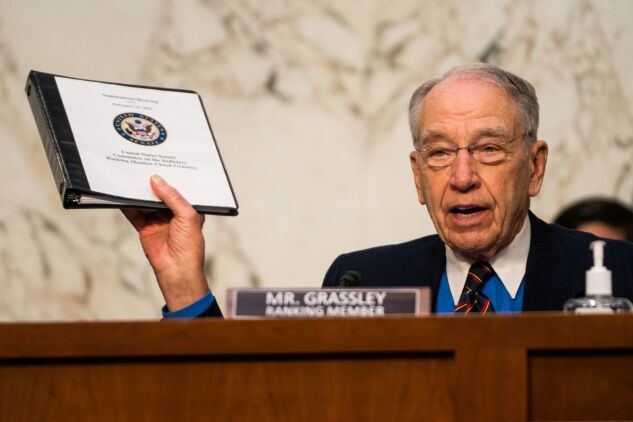 The language in the amendment would present a modest burden for the government when seeking dismissal, said Eric R. Havian of Constantine Cannon LLP in San Francisco. “It’s a very low bar to meet, but at least it’s a bar,” he said.

DOJ-backed dismissals have increased since the January 2018 Granston memorandum instructed prosecutors to stop meritless cases that would drain resources or produce unfavorable precedent.

The DOJ’s effort has been aided by some federal courts, which say the government has unfettered discretion when it moves for dismissal. That standard would be void if Grassley’s bill is enacted.

Forcing the DOJ to explain why it wants a case dismissed will “provide transparency and reassure whistleblowers across the country that the government is not arbitrarily dismissing their claims,” Grassley said in an FCA conference in February.

This FCA amendment rejects the notion that the DOJ has absolute power on this issue, said H. Vincent McKnight Jr., who represents FCA whistleblowers at Sanford Heisler Sharp LLP in Washington. “I would expect that this will cause the DOJ to think twice about seeking a dismissal.”

The bill’s prospects in a Democratic Senate are unclear, but it has bipartisan support.

Articulating non-fraudulent, non-arbitrary, and legal reasons for a dismissal “is not a daunting task, and it is unlikely to become one,” said Adam Tarosky, who represents FCA defendants with Nixon Peabody LLP in Washington.

The DOJ’s civil fraud attorneys have never dropped an FCA action without justification, he said. “In other words, the government never relied on its ‘unfettered discretion’ alone to support dismissal,” he said.

But the proposed amendments may have a “chilling effect” on DOJ dismissal motions, he said. This would be “unfortunate from my perspective because of the often astronomical and unnecessary litigation costs that unmeritorious qui tam actions impose on defendants long after the government has moved on,” he said.

The DOJ told Grassley it only sought dismissals in 4% of whistleblower cases since the Granston memo, but it had used its power when a whistleblower suit would “undermine the goal of preventing fraud or other important government interests.”

The government is the real party in interest in an FCA case, so it makes little sense for an outsider with a pecuniary interest, like a whistleblower, to be able to affect whether the government can dismiss a case brought in its name, said Bob Rhoad of Nichols Liu LLP, a Washington firm that represents federal contractors in false claims litigation.

“Perhaps the better question is whether the government should bear the burden of showing why a whistleblower suit should be allowed to proceed where government has declined to intervene,” he said.

In the absence of clearer legislative language, federal circuit courts have fashioned different standards for handling the dismissal issue.

The D.C. Circuit says the DOJ has an unfettered right to dismiss a whistleblower’s suit, while the Ninth Circuit requires the DOJ to show that dismissal serves a valid government purpose and that there is a rational relationship between the dismissal and that purpose.

If the bill is enacted, a standard “very similar” to that of the Ninth Circuit’s would become law, Havian said. 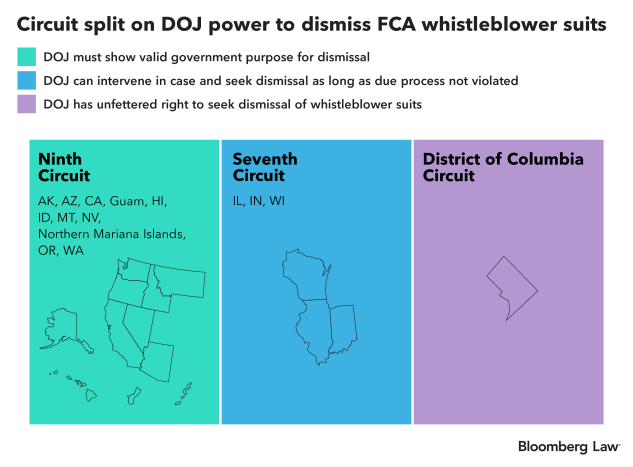 The Seventh Circuit in August 2020 ruled it didn’t have to take sides on this split, but nonetheless dismissed a suit alleging kickbacks by pharmaceutical companies because the DOJ showed good cause and didn’t violate due process.

The Seventh Circuit whistleblower filed a petition to the U.S. Supreme Court that was denied June 28, arguably leaving a three-way circuit split in place.

On July 7, the Fifth Circuit backed the dismissal of a whistleblower’s kickback claims against pharmaceutical companies and , finding that the government’s decision was satisfactory under all standards.

The issue is also pending before the First and Third circuits.