From Atlanta to Phoenix, Republican-led states trying to thwart ’s policy agenda are rewriting a legal strategy Democrats used to block in court.

The new administration has been targeted in more than half a dozen complaints during its first two months in office, on issues including immigration, the use of federal Covid-19 funds and the Keystone XL oil . On Wednesday, Wyoming and Louisiana led more than a dozen states over a climate-change initiative that halts oil and gas leases on federal land.

And more lawsuits are on the way.

“We’ve gone from being on defense to being on offense,” said Alabama Attorney General , policy chairman for the Republican Attorneys General Association.

Suits are being filed by Republican attorneys general in conservative-leaning federal districts, where they hope for trials before Trump-appointed judges. Big GOP-led states including Texas, Florida and Ohio will be “critically important” in leading fights against major Biden policies because they have deep pockets and staff, while smaller states such as Indiana and Alabama target issues of more local concern, such as religious freedom, Marshall said.

The goal of the legal strategy is to champion conservative political issues and “essentially push back on just about everything regulatory coming out of Washington,” especially with Democratic majorities in Congress, said Paul Nolette, a lawyer who heads the political science department at Marquette University in Milwaukee. “They’re revved up and ready to go.”

It’s too soon to know how successful they’ll be. But a new crop of Trump-appointed judges -- including a 6-3 conservative majority on the U.S. Supreme Court -- may be receptive to Republican arguments, and Democrats have left behind legal precedents for flexing state power after their many challenges to Trump policies. 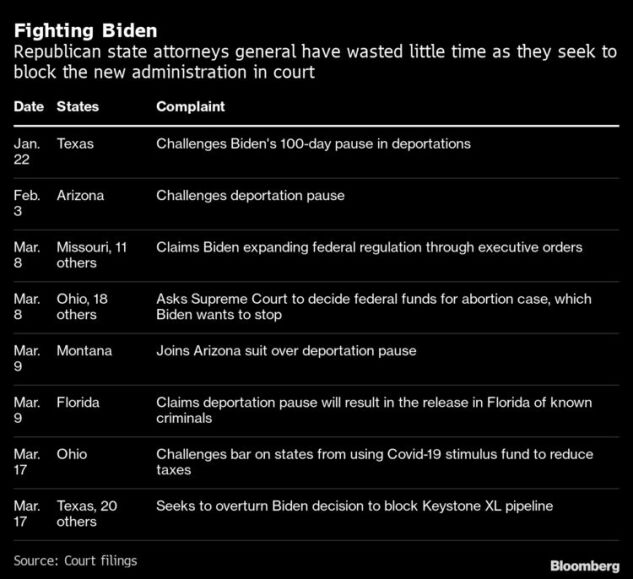 With Biden moving quickly on his agenda since taking office in January, some states are determined to fight back. In addition to filing lawsuits in jurisdictions with conservative majorities on appeals courts, GOP attorneys general have joined forces on Supreme Court briefs and written letters to federal agencies announcing opposition to various moves by the new administration.

“There has to be a way to make sure that everybody stays in their lane -- particularly, as we do now, when you have a federal government that’s under the control of one political party,” Georgia Attorney General , who is chairman of the Republican Attorneys General Association, said in an interview. “You saw our colleagues on the other side file lawsuits on everything. We’re trying to be more strategic.”

While states fighting federal policy in court isn’t new, attorneys general have stepped up their party-line activism in the past two decades, reflecting their expanded power in shaping public policy as the U.S. became more polarized politically. State-led litigation by Democrats accelerated during the Trump years, after Republicans mounted challenges to , including over the Affordable Care Act.

Banding together allows states to share resources, sharpen their legal arguments and amplify specific issues with the public and the courts, said , who was Wisconsin Solicitor General from 2015-2018 and worked with then-Attorney General , a Republican.

Getting involved in such national cases also makes political sense for elected attorneys general, who can raise their profile or champion issues popular locally.

“We often joke that AG stands for aspiring governor,” said , a law professor at Case Western Reserve University in Cleveland. “How much is that going to be true in these cases?” 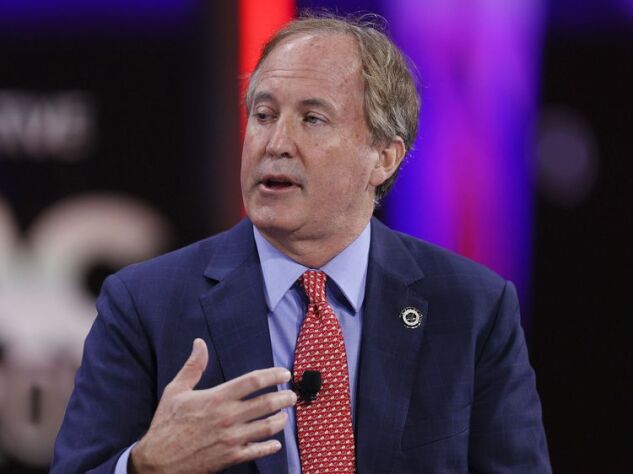 Initially, the GOP-led states are focusing on Biden’s “prolific” use of memorandums and executive actions, at least those that have actual teeth, Alabama’s Marshall said. They’ll next turn their attention to new rules and regulations issued by government agencies, he said.

In an early win, Texas Attorney General succeeded in blocking Biden from freezing deportations for 100 days, dealing a setback for the president’s broader effort on immigration reform. U.S. District Judge ruled Feb. 23 that the administration’s plan and would impose greater detention costs on the state.

However, Texas also led a group of GOP attorneys general in a failed lawsuit challenging the November presidential election, one of dozens filed by Republican states and the Trump campaign that were rejected by the courts -- including conservative judges appointed by Trump. The Republican Attorneys General Association’s executive director in January after reports that an offshoot of the group helped organize the Trump rally that turned into a deadly insurrection at the Capitol.

There’s also the risk that competition within the group will test collaboration, with attorneys general jockeying for the lead position on big lawsuits or racing to be the first with a press release on a new case. During the Obama years, big states including Texas spearheaded group litigation because they’re the ones with the resources and staff to handle multiple cases at once. But some still opted to wage legal fights on their own.

“There’s a lot of personalities,” said Montana Attorney General , who took office in January and has led new litigation on Keystone XL. “Not every state AG has the same priorities that Montana does. Not every state is a natural-resource state. Depending on the issue, you’re going to have different allies.”

Republicans may benefit from arguments made by Democrats in getting the Supreme Court to rule against Trump policies involving the census and the Deferred Action for Childhood Arrivals program, said Scott Keller, a former Texas solicitor general now in private practice. Both cases established tougher standards for government officials to explain and justify their actions -- precedents that can be used to challenge Biden, Keller said.

Working as a group also allows states more flexibility in seeking favorable court jurisdictions for their lawsuits, said , a former Justice Department lawyer under Trump who now specializes in environmental and natural resource litigation at . Trump appointed more than 200 judges to the federal bench during his term.

“These aren’t judges who are guaranteed to rule in our favor, but they have the right judicial philosophy, and that is to rule on the law and not make the law,” Alabama’s Marshall said.

To contact the reporters on this story:
in Arlington at egilmer@bloomberg.net;
in New York at elarson4@bloomberg.net