The FBI’s Wednesday raids on ’s Manhattan home and office are a stunning reversal for a former law-and-order mayor and crusading federal prosecutor who perp-walked accused insider traders off Wall Street trading floors in the 1980s.

Legal experts say the search warrant Federal Bureau of Investigation agents executed on Giuliani suggests charges will soon be brought as part of a long-running investigation into his work in Ukraine, including attempts to dig up dirt on ahead of the 2020 election. 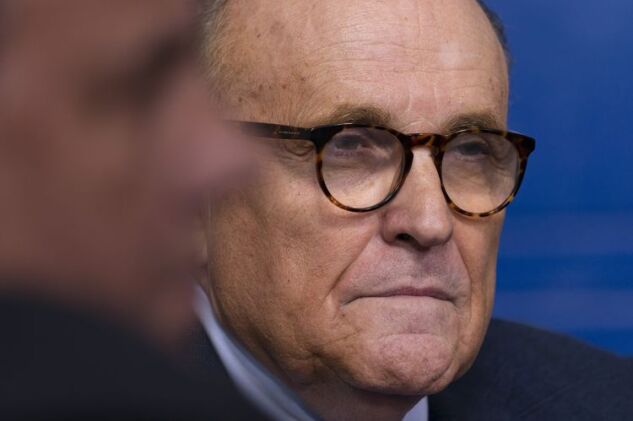 “It’s a clear indication that they’re very close to indicting him,” said Danya Perry, a former federal prosecutor. “Much thought has gone into this, and executing the search warrant is almost the last step in the playbook.”

Giuliani’s lawyer, Robert Costello, on Wednesday denied any wrongdoing by his client.

“Mr. Giuliani respects the law, and he can demonstrate that his conduct as a lawyer and a citizen was absolutely legal and ethical,” Costello said in a statement.

The investigation is being conducted by the same Manhattan U.S. attorney’s office that Giuliani once led. Before winning office as New York City’s 107th mayor in 1993, he made his name as a prosecutor who took on the mob, corrupt politicians and some of the biggest names on Wall Street. He famously directed federal agents to make their arrests on trading floors.

“It is really extraordinary,” said , a New York University law professor. “He was the U.S. Attorney for the Southern District of New York. He was associate attorney general for the United States. He was a presidential candidate. To me this is a stunning moment in the fall of a man’s life and late in a lawyer’s career.”

Yet the FBI search warrant is also just the latest blow Giuliani’s image as “America’s Mayor” has taken since he became a fierce loyalist and personal lawyer to former President . Giuliani pushed Trump’s claims of a stolen election in courtrooms, the parking lot of a suburban Philadelphia landscaping company and at a Nov. 19 Washington press conference, with sweat and hair dye memorably running down the sides of his face. He also spoke at the Washington rally that preceded the Jan. 6 Capitol riot.

The search warrant on Giuliani in some respects echoes the April 2018 FBI raid on the apartment of another Trump lawyer. pleaded guilty later that year to campaign finance and other charges and was sentenced to three years in prison. Cohen has since become a fierce critic of his former boss, frequently describing him as a cheat, fraud and racist. Giuliani has in turned slammed Cohen as an “incredible liar.”

Cohen on Wednesday responded gleefully on Twitter when the New York Times first reported that the FBI was searching Giuliani’s apartment.

People familiar with the matter said the Justice Department under Trump declined to authorize a warrant on Giuliani. Costello said Wednesday the decision to move forward now showed the warrant was politically motivated. Giuliani’s son Andrew, who has suggested he may run for New York governor, called the search “disgusting” and likewise accused the Biden Justice Department of playing politics.

“If this happens to the former president’s lawyer, this could happen to any American,” he said. “Enough is enough.”

Gillers said he doubted that argument would gain much traction. “Given all the Constitutional protections against risk of error, it will be impossible for Giuliani to argue this is a fake investigation, that it’s politically motivated,” said Gillers. “It doesn’t mean he won’t say that, but the government has to produce.”

, a former top assistant to Manhattan District Attorney , who competed with Giuliani for big cases and headlines in the 1980s, said the latter’s former positions more likely raised the bar for the prosecutors who sought the warrant and the judge who signed it.

“This is a search warrant for the home of the former mayor of New York City, a former high-ranking Justice Department official, and they’re saying there’s now probable cause to believe there’s evidence of a crime, that evidence exists, and it’s at his home,” said Moscow, who’s now in private practice.

As Manhattan U.S. attorney, Giuliani brought headline-grabbing insider-trading cases against , and the high-flying investment bank Drexel Burnham Lambert, which folded in 1990 but whose alumni like and remain Wall Street power players. He also went after the leaders of the five New York Mafia families in the famous “Commission” case that was interrupted by the assassination of Gambino family boss Paul Castellano outside of Manhattan’s Sparks Steakhouse.

“In the early points of his career he’d achieved things that lawyers struggle hard to get and fail,” said Gillers.

Giuliani went on to serve as New York mayor for two terms, during which he oversaw a sharp drop in crime but also fueled controversy over his embrace of stop-and-frisk and other racially charged police tactics. He earned praise across the political spectrum though for his leadership during the Sept. 11, 2001, World Trade Center attack. After leaving City Hall, he unsuccessfully sought the 2008 Republican presidential nomination, but largely focused on a lucrative portfolio of legal and consulting work. Many of his clients were foreign political or business leaders, including in Ukraine.

Giuliani’s consulting work posed no risks when it was confined to foreign soil, but raising anything on behalf of foreign clients with U.S. officials could raise potential violations of the Foreign Agent Registration Act, which requires lobbyists to disclose when they are working on behalf of foreign governments, according to legal experts.

and Igor Fruman, two associates of Giuliani, are facing charges related in part to their effort to oust the former U.S. ambassador to Ukraine, . Giuliani’s actions related to Ukraine have been a subject of scrutiny since the earliest days of the Parnas and Fruman prosecution.

The FBI on Wednesday also executed a warrant on , a conservative lawyer with ties to Giuliani who also sought dirt on Biden in Ukraine. A person familiar with that warrant said Toensing’s Washington-area home was not searched but her phone was seized. The person said Toensing was told she was not a target of the investigation.

Trump’s request that Ukrainian officials launch an investigation of Biden ultimately led to his first impeachment though he was acquitted by the then Republican-controlled Senate.

A number of other Trump associates were previously prosecuted for illegally lobbying on behalf of foreign interests, including former 2016 campaign chairman and Republican fundraiser . Both Manafort and Broidy were given presidential pardons by Trump just before he left office. Giuliani was not, though the New York Times reported he discussed the matter with Trump.

Now, with Trump under scrutiny by Manhattan District Attorney for fraud and other possible crimes, two born-and-bred New Yorkers who rose to great power are under separate investigations by separate prosecutors with offices just blocks apart. For Giuliani at least, the case could prove something of a homecoming -- a very unwelcome one.

(Updates with response of Michael Cohen and Andrew Giuliani)

To contact the reporters on this story:
in Federal Court in Manhattan at pathurtado@bloomberg.net;
in New York at gregfarrell@bloomberg.net