Eaton joins the London-founded firm in New York as co-head of its new securities and shareholder litigation practice. She’ll lead the group at the roughly 2,800-lawyer international firm alongside Meredith Kotler, who joined late last year with a team from Cleary Gottlieb Steen & Hamilton.

“This was an opportunity to build a group from the ground up, from its inception, with two senior women litigators at the helm committed to growing a practice that is reflective of the clients that we serve,” Eaton said in an interview. “And that was an opportunity, pandemic or no, that I could not say no to.”

Freshfields’ U.S. growth plans kicked into high gear last fall before the coronavirus pandemic, when the firm brought on a four-lawyer Cleary group that included Kotler and mergers and acquisitions heavyweight Ethan Klingsberg. It served a shot across the bow for the Magic Circle firm, which has since made hires like Eaton to add to and complement U.S. deal and corporate work and recently launched a new Silicon Valley office.

Eaton, a former Cravath, Swaine & Moore associate, specializes in complex commercial litigation, focusing on shareholder litigation and other business disputes. Her clients have included , Tower Insurance, and in securities litigation, and the independent directors of and in derivative suits. She has spent nearly 20 years at Willkie, having joined the Wall Street firm in 2002.

“Mary and Meredith are a powerhouse duo whose experience and expertise in communicating with directors and executives about serious litigation risks and in handling corporate litigation successfully are exactly what our clients are demanding,” said Klingsberg, who is head of U.S. Corporate and M&A at Freshfields, in a statement.

Government enforcement actions and antitrust matters, among others, are on the rise and can all lead to shareholder litigation, according to Kotler.

“This practice is there to let our clients, boards, senior management know that we can handle all the issues that will come up for them as they navigate those regulatory, transactional and investor landscapes all at once,” Kotler said in an interview.

Growth in the U.S.

The new securities and shareholder litigation practice is tied very closely to the firm’s corporate practice, which has been a cornerstone of Freshfields’ recent stateside expansion efforts, Kotler said.

“It fits hand in glove with all of this and the growth of all of it,” she said.

“We are diversified enough that we don’t see momentum slowing down any time soon,” said Kotler, who said the firm is still eyeing new hires, especially in New York.

At the same time the firm has recently seen its former U.S. head of M&A and global transactions Mitchell Presser decamp for Morrison & Foerster, along with private equity and M&A lawyer Omar Pringle.

Though M&A markets stalled in the wake of the coronavirus pandemic, Freshfields’ work in this area seems to be helping the firm gain deal market share. The firm worked on 69 deals worth nearly $108 billion in the first half of 2020, including advising in its $31 billion acquisition of and $18 billion sale of its elevator division to a consortium. 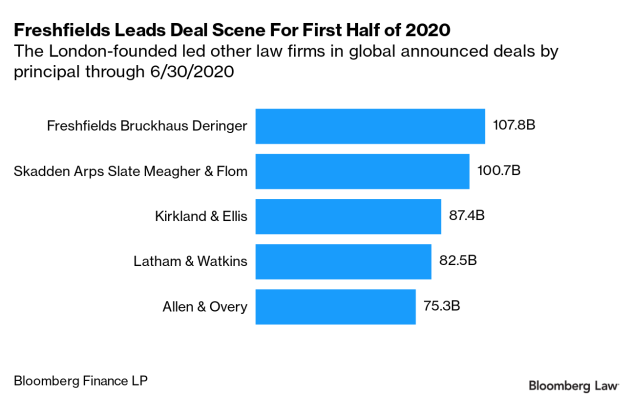 ”There must be some sort of special sauce that’s propelling them forward and they’re going to be a firm to watch,” said Diane Holt, Bloomberg Law analyst and former corporate transactions lawyer.

Eaton’s hire and the formation of the new Freshfields practice come at a time when signs point to an increase in shareholder suits and claims related to how corporations and boards responded to the coronavirus.

“The pandemic is affecting all companies in all sorts of different ways and when that happens shareholder suits are almost destined to follow,” Eaton said.

In addition to securities litigation, Eaton has also focused on pro bono, particularly on LGBTQ rights. Along with other Willkie lawyers, she represented some 92 plaintiffs in an amicus brief filed in support of the constitutionality of same sex marriage in the landmark 2015 U.S. Supreme Court case Obergefell v. Hodges.

Eaton also led a group at Willkie that filed an amicus brief on behalf of education groups in another high profile LGBTQ rights case, Gloucester County School Board v. G.G., concerning the rights of a transgender public school student.