The U.S. Supreme Court’s historic May argument session—which will be held by phone due to the coronavirus pandemic—will also be notable for featuring an argument between two female lawyers to start the two-week session.

Legendary high court litigator Lisa Blatt, of Williams and Connolly, will face off May 4 against Erica Ross, assistant to the U.S. solicitor general, in a trademark case.

But, on the whole, the session will fall in line with the precedent of male attorneys arguing nearly every case, with another assistant to the SG, Morgan Ratner, being the third woman arguing as compared to the session’s 23 men. She’ll be on the phone May 11 for a dispute over employment discrimination in the context of religious employers. 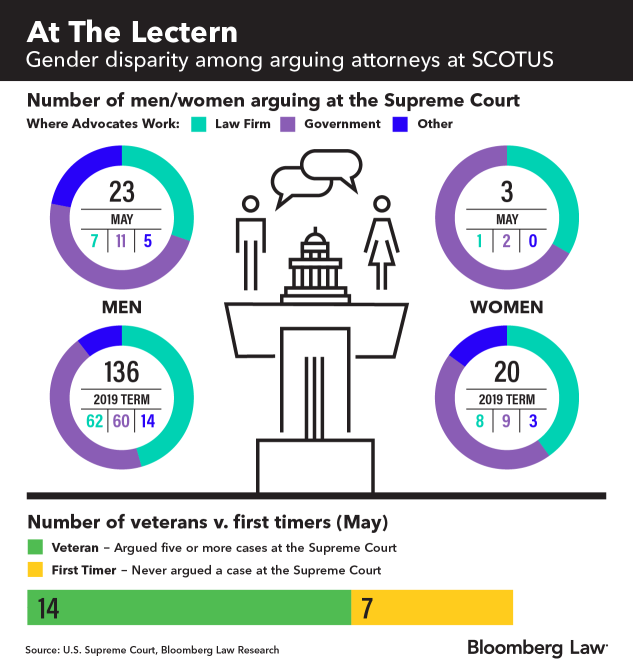 The solicitor general himself, Noel Francisco, is arguing twice over the two-week period, including on the same side as veteran advocate Paul Clement in a closely-watched case over the Obamacare contraception mandate. They’re teaming up against Pennsylvania chief deputy attorney general Michael Fischer.

Francisco is also set to argue on May 12 in the battle over subpoenas for President Trump’s financial records.

Another notable argument is a rerun of sorts, McGirt v. Oklahoma, on May 11. The justices couldn’t reach a decision in a similar dispute last term over the status of American Indian lands in Eastern Oklahoma, and granted McGirt in its stead. Three of the four attorneys arguing will be the same this time around. Last time, Blatt argued for the state when she was at a different firm, Arnold & Porter. She’s since moved back to Williams and Connolly. This time, the state’s solicitor general, Mithun Mansinghani, will make his high court debut.