The brother of and relatives of other Black Americans who died at the hands of police made personal pleas to top senators to agree on bipartisan legislation addressing repeated abuses nationwide, although lawmakers didn’t commit to meeting President ’s new call for passage by the May 25 anniversary of Floyd’s killing.

“We’re just here to just get our point across and let them know that we’re hurting, we’re still in pain,” Philonise Floyd said in Washington on Thursday after meeting Senate Majority Leader . 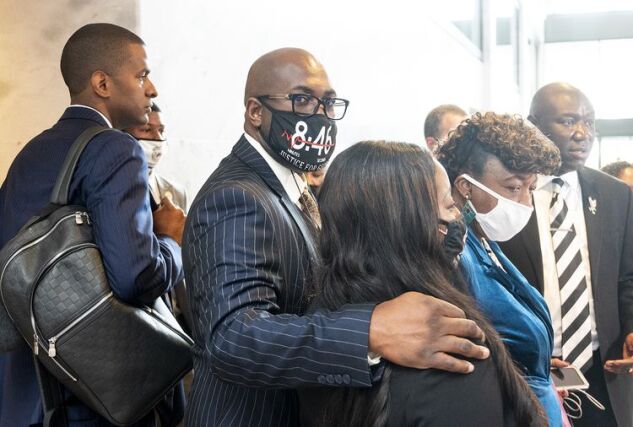 A video of George Floyd’s death as a White Minneapolis police officer held his knee on Floyd’s neck sparked outrage and protests worldwide. It also helped convict the officer, Derek Chauvin, of second- and third-degree murder and second-degree manslaughter.

Philonise Floyd said that while police were held accountable for his brother’s death, “these other families, and other families, that didn’t have footage all across America, they want the same thing.”

At his joint address to Congress on Wednesday, Biden called on lawmakers to approve policing overhaul legislation by May 25, exactly one year since Floyd’s death. Members of the Floyd family and the rest of the group went to the White House Thursday afternoon for a meeting with with White House counsel Dana Remus and senior advisers and following the discussions on Capitol Hill.

Chauvin’s conviction on April 20 gave new momentum to a search for a compromise between Democrats and Republicans on legislation aimed at reining in some police tactics, improving training and increasing accountability.

Still, when Schumer was asked after the meeting whether he would try to meet Biden’s deadline, he simply said, “We need a strong, strong bill.”

Senator of New Jersey, a top Democrat in the bipartisan talks, also was noncommittal when asked Thursday about that time frame.

”I want to get this done as quickly as possible,” Booker said. “I’m not putting deadlines out there, I’m putting the urgency of the work.”

Biden put forth his goal for final legislation as negotiators including Booker, GOP Senator and Democratic Representative are seeking an elusive compromise on policing-reform legislation. After a meeting Thursday afternoon, participants said they were making progress on a bill but haven’t resolved outstanding issues, including whether and how to increase liability for individual police officers who abuse their authority.

“There is a positive spirit in the room,” Senate Judiciary Chair , an Illinois Democrat, said. “We still have a number of major issues to work out.”

The House in early March approved a policing reform bill that would ban chokeholds and no-knock warrants, eliminate qualified immunity for law enforcement officers, prohibit racial and religious profiling and establish a national standard for police department operations. The Senate hasn’t acted since last June, when Democrats blocked from the floor an alternative by Scott that would have cut 25% of federal funds to police departments that failed to provide detailed information to the Justice Department about incidents of excessive force and no-knock search warrants. It didn’t address the liability issue.

, an civil rights attorney who has represented the Floyd family and others who have died at the hands of police officers, said after the meeting with Schumer that the majority leader committed to moving legislation only after the families he met with believed the Senate would be considering a bill they see as “strong” enough.

“He thought it was very important that these families who have their blood on this legislation believe in it, and hopefully everyone in America can believe in it,” Crump said.

On Thursday, the families also met with Scott and with Senator , a senior Republican on the Senate Judiciary Committee. One civil rights attorney who participated, , said after that meeting that the families would insist that legislation allow families of victims to sue police officers, and that it strengthen Section 242, a part of federal law that sets the bar for criminally prosecuting police officers.

Both are central issues in the talks, and are opposed by Republicans in both chambers. Scott and other lawmakers have said one idea under discussion would allow victims’ families to sue police departments or local jurisdictions, rather than the officers themselves.

Other family members who attended the meetings said they are optimistic a final compromise will emerge.

“We’re here to urge them to do what is right, so that we can move forward so that we can stop or prevent another killing of a unarmed black or brown person,” said Alissa Finley.

Her brother, Botham Jean, was killed in 2018 by an off-duty Dallas police officer who claimed she mistakenly entered his apartment thinking it was hers and that he was an intruder. The officer was found guilty of murder.