A prison cell is seen.
Photo by Kiyoshi Ota/Bloomberg

Federal sentencing and prison experts Maureen Baird, Mark H. Allenbaugh, and Alan Ellis evaluate the effectiveness of the First Step Act, a bipartisan bill passed in 2018. They say that earned time credits, which allow for early release for low-level offenders, need to be utilized more in light of the ongoing pandemic and high numbers of Covid-19 deaths in federal prisons.

The First Step Act (FSA), passed on Dec. 18, 2018, is a bipartisan sentencing reform law that directly impacts offenders serving a federal prison sentence in the custody of the Bureau of Prisons (BOP). It was intended to reduce overly punitive sentences as well as improve conditions within the BOP by reducing the inmate population.

Unfortunately, the FSA does not appear to be consistently enforced.

But after Jan. 19, 2022, the number of inmates incarcerated within BOP prisons has barely been reduced. The residential reentry population, however, has slightly increased, perhaps due to earned time credits (ETCs) being awarded.

The FSA reduces inmate population by providing additional ways for certain defendants to avoid being sentenced to an otherwise mandatory minimum sentence. It also provides most inmates with the opportunity to essentially reduce their sentences by successfully completing certain programs designed to reduce the likelihood of recidivism. Such successful completion provides the inmate with ETCs.

To be eligible to earn ETCs, inmates must (1) have a minimum or low pattern score (FSA’s risk assessment tool utilized by the BOP), and (2) not have a conviction for a disqualifying offense (terrorism, espionage, human trafficking, sex offenses, and other crimes determined to be violent).

Additionally, inmates must be eligible for pre-release custody, such as halfway house or home confinement. Deportable non-U.S. citizens are not eligible for ETCs, as well as inmates with a medium or high pattern risk assessment score or those that have committed any of the disqualifying offenses.

Eligible inmates can earn ETCs by participating and successfully completing specific BOP programs and/or work assignments. ETCs are calculated at the rate of 15 days for each 30 days of consistent programming. ETCs can be applied toward extra community-based programming (halfway house and home confinement), or toward the end of an inmate’s sentence.

In addition to an earlier release from BOP custody into community-based programs (such as halfway houses or home confinement), ETCs allow eligible inmates an earlier transition to their term of supervised release (up to 12 months earlier). Prior to the FSA, inmates were only eligible for up to 12 months in a halfway house and home confinement for six months, not to exceed 10% of sentence, whichever was less.

Inmates with a medium or high pattern score, non-U.S. citizen offenders, and those with a disqualifying offense, however, are not eligible for ETCs. Nonetheless, they may be eligible to earn other incentives through work assignments and participating in certain programs such as extra visits, additional phone or email minutes, and extra commissary benefits and privileges. 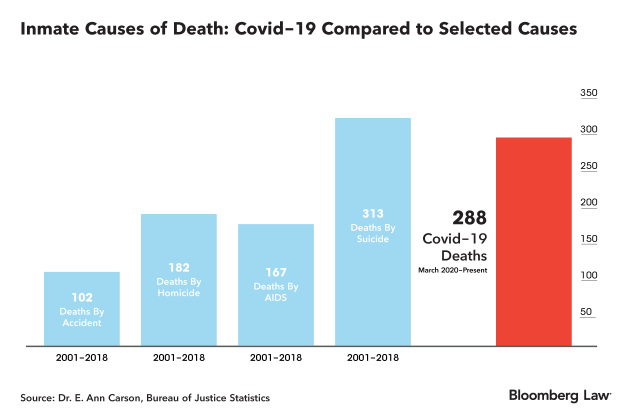 This overcapacity undoubtedly has contributed to the unprecedented number of Covid-19 inmate deaths. As the graph above illustrates, from 2001 through 2018, there were only 102 inmate deaths by accident, 182 by homicide and 167 from AIDS.

In contrast, in less than two years, Covid-19 has killed at least 288 inmates (not including seven staff and 18 inmates in private facilities).

That the BOP is finally awarding FSA ETCs to inmates could not come soon enough. Unfortunately, it appears this effort is going slower than hoped, which could not come at a worse time as the pandemic continues to rage within the BOP’s institutions.

Obviously, increased application of FSA ETCs can greatly assist in moderating, if not decreasing, the BOP’s inmate population. Reducing the number of inmates is perhaps the most effective means for the BOP to combat the spread of COVID-19 within its many facilities, for doing so allows for greater social distancing, reduces the number of transmission vectors, and reduces the impact on the BOP’s healthcare infrastructure during subsequent surges.

Maureen Baird, formerly a high-ranking U.S. Bureau of Prisons’ official, is a consultant with the Law Offices of Alan Ellis. Her experience in federal corrections began as a case manager with the Federal Bureau of Prisons, where she spent 28 years.

Mark H. Allenbaugh is a sentencing and mitigation consultant with the the Law Offices of Alan Ellis. He is a nationally recognized expert on federal sentencing, law, policy and practice, and heads up the firm’s Covid and the BOP task force. He is a co-founder of Sentencing Stats LLC, which provides attorneys and their clients with expert statistical analyses of federal sentencing data and trends.

Alan Ellis, founder of the Law Offices of Alan Ellis, is a past president of the National Association of Criminal Defense Lawyers and Fulbright Award recipient. He is a criminal defense lawyer with offices in San Francisco and New York and an authority in sentencing and prison matters.