Companies that bill the federal government for services are eager in 2020 to see what courts say about Justice Department decisions to dismiss whistleblower cases it finds to be meritless or a burden on government resources.

The U.S. Court of Appeals for the Seventh Circuit is considering how much deference the federal courts should give to those dismissal decisions in a specific case over whether an Illinois federal judge erred in rejecting the DOJ’s move to dismiss a suit alleging a drug kickback scheme by , , and others.

The Seventh Circuit could follow the D.C. Circuit, which says the DOJ has unfettered discretion to end whistleblower cases filed under the False Claims Act. Or it could track the Ninth Circuit, which requires the government to show that dismissal serves a valid governmental purpose and that dismissing a case is rationally related to accomplishing that purpose. Oral argument is set for Jan. 23 in Chicago.

The DOJ’s appeal comes as litigants are seeing a noticeable increase in DOJ-pushed FCA dismissals two years after the Jan. 10, 2018, Granston memorandum. A whistleblower case that lacks merit on its face, wastes government resources, or undermines federal policies should be targeted for dismissal, according to the memorandum.

Federal district courts have granted 25 DOJ motions to dismiss in the two years since the memo came out, according to correspondence from the DOJ to Sen. Chuck Grassley (R-Iowa).

In contrast, district courts issued such decisions only six times in the two years prior to the memo’s release, according to a Bloomberg Law analysis. 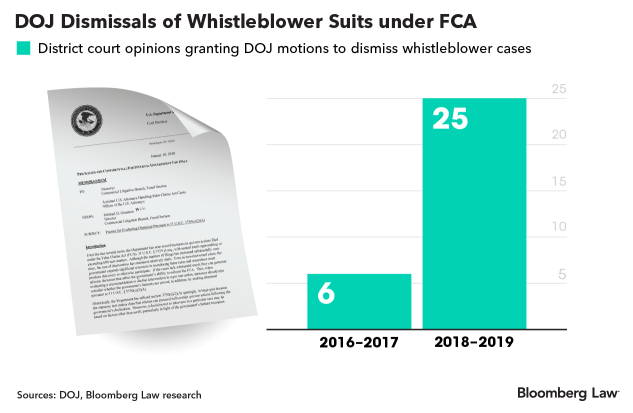 Some attorneys that represent companies targeted by whistleblowers say the increase in DOJ dismissal motions is neither cause for celebration nor concern because dismissal efforts are rare and focus on exceptional cases.

But those who represent whistleblowers say more dismissals and judicial deference to the federal government could chill whistleblower filings.

The appeal involves CIMZNHCA LLC’s allegations that CVS, Omnicare, and the suit’s other defendants offered free nursing and reimbursement support services to entice doctors to recommend the drug Cimzia to patients.

The defendants then submitted claims to Medicare and Medicaid that were tainted by these kickbacks, the company says.

CIMZNHCA is one of 11 entities created by Venari Partners LLC—a company made up of private investors doing business under the name the NHCA Group—to pursue whistleblower cases over alleged drug fraud schemes in federal courts.

The DOJ in December 2018 moved to dismiss all of the cases, arguing they were meritless, didn’t allege violations of federal health-care policies, and would drain government resources.

That includes five rulings granting dismissal, four voluntary dismissals, and one dismissal for failure to make a timely court filing.

The DOJ says in its opening Seventh Circuit brief that an Illinois federal court’s decision to keep CIMZNHCA’s suit alive was improper because the executive branch’s decision to stop a suit brought in its name is “presumptively unreviewable.”

Ron Wisor, of Hogan Lovells LLP in Washington, said the cases were a legitimate dismissal target because the pharmaceutical companies took steps to explain to the government that the allegations were contrary to longstanding guidance from the Office of Inspector General at the Department of Health and Human Services.

It is inappropriate for a whistleblower to make policy through litigation inconsistent with federal healthcare policy, especially when FCA cases belong to the government, he said.

But Judge Staci M. Yandle of the U.S. District Court for the Southern District of Illinois allowed CIMZNHCA’s case to proceed after concluding that the government failed to properly investigate the specific claims, didn’t review materials from the whistleblower aside from the complaint, and failed to assess whether the case could result in significant revenue for the government.

CIMZNHCA says in its opening brief to the Seventh Circuit that Yandle got it right. The Ninth Circuit’s rational relationship standard is consistent with the FCA, because it demands thorough government investigations before dismissal motions, it said.

The FCA says dismissals aren’t allowed without whistleblowers receiving a hearing on the motion. “It would be a waste of the court’s time to hold a hearing in which it has no power except to grant the government’s motion,” CIMZNHCA said.

Yandle isn’t the only one concerned about the DOJ’s rush to dismiss whistleblower cases.

Citing Yandle’s ruling, Grassley, the Iowa senator, sent a Sept. 4 letter to Attorney General William P. Barr to inquire about dismissal motions that cite litigation costs even though their “arguments were vague, pretextual and could not demonstrate cost was prohibitive.”

The letter sought information on how many cases the government has moved to dismiss since the DOJ issued the Granston memo, its reasons, and its cost-benefit analyses.

The DOJ responded Dec. 19 with a rundown of dismissal efforts, stating that it filed 45 motions to dismiss more than 1,170 whistleblower actions since 2018.

“The fact that we have sought to dismiss fewer than 4% of cases reflects our serious commitment to allow appropriate qui tam matters to proceed,” the letter said.

Grassley still has outstanding questions about steps taken by the DOJ before requesting that a whistleblower case be dismissed, a Grassley representative said Jan. 2.

Claire M. Sylvia, of Phillips & Cohen LLP in San Francisco, echoed some of Grassley’s concerns and said whistleblower firms like hers could be discouraged from investing in cases if the DOJ overuses its authority and seeks dismissals for insubstantial reasons.

In the meantime, it isn’t clear whether the Granston memo caused the uptick in DOJ dismissal motions, or if it occurred because of an increase in FCA complaint filings, said H. Vincent McKnight Jr. of Sanford Heisler Sharp LLP in Washington, a firm that represents whistleblowers.

The Granston memo hasn’t slowed business, as his firm “is actively vetting new claims every day,” he said.

The Granston memo is “more of a scare tactic” telling whistleblowers they should think twice about pursuing a case that the government has declined to join, said Dave Scher of whistleblower firm Hoyer Law Group PLLC in Washington.

Lori L. Pines, of Weil, Gotshal & Manges LLP in New York, agreed that plenty of whistleblower litigation will proceed despite the DOJ’s increased use of its dismissal power.

There will still be many meritless cases to defend involving “payout-seeking whistleblowers who seek to abuse the FCA statute,” she said.

Contractors will be encouraged by the increased dismissals, but they’re also aware that the DOJ will seek dismissal “only in exceptional circumstances,” Pines said.