Majority Leader Chuck Schumer (D-N.Y.) is preparing to focus on federal judicial nominees rather than the annual defense authorization bill when the Senate returns for its lame-duck session next week, according to people familiar with the matter.

Progressives have urged the Democratic-led Senate to continue processing Joe Biden’s judicial nominees even if results of the midterms aren’t known when lawmakers resume work Nov. 14.

Depending on the outcomes in Nevada and Arizona, the balance of power in the chamber that confirms judicial nominees could hinge on a runoff in Georgia next month between Sen. Raphael Warnock (D) and challenger Herschel Walker (R). A Georgia runoff after the 2020 elections provided Democrats their current 50-50 control of the Senate with Vice President Kamala Harris as the tie-breaking vote.

“Confirming judges should always be a top Democratic priority, and especially while control of the Senate remains uncertain, Democrats must do everything in their power to confirm as many of President Biden’s judicial nominees as possible before the end of the year,” said Christopher Kang, co-founder and chief counsel of the progressive group Demand Justice, in a Wednesday statement.

Democrats had already indicated they intend to keep nominations moving. A Judiciary Committee Democratic spokesperson said the panel will continue its work through the end of the Congress in line with what past committee chairs have done. “This includes holding Committee hearings and voting on the outstanding nominees we have pending,” the spokesperson said in a statement.

Schumer scheduled a vote to end debate on a district court nominee the night the Senate returns, and the Judiciary Committee scheduled a nominations hearing the following day. A witness list hasn‘t been released.

Because plans are still in flux and Democrats may have definitive midterm election wins in the next few days, Schumer could also leave the defense bill on the floor, at least for a limited time.

White House Press Secretary Karine Jean-Pierre included confirming the president’s judicial nominations in a list of the administration’s priorities for the lame-duck at a Thursday press briefing. Other priorities were passing legislation on marriage equality, electoral reform, and the defense authorization bill. 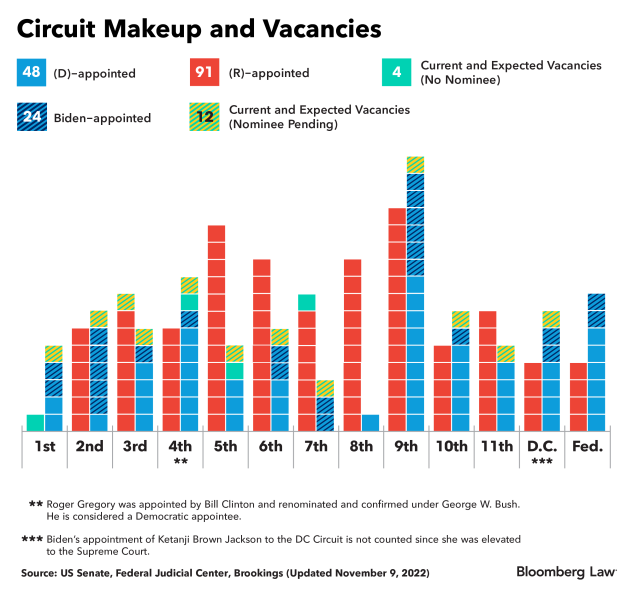 If Senate control comes down to a Georgia runoff in early December and Warnock is at home campaigning, Democrats will likely focus on less controversial nominees, including ones who have received support from Republican home-state senators, said John Collins, a law professor at George Washington University who studies judicial nominations.

More controversial nominees, such as those who tied in committee and need discharge votes, could be considered when Warnock is back after the runoff, Collins said. Although, if Democrats retain Senate control, there would be less pressure to confirm the nominees this Congress, he said.

Accounting for a recess around Thanksgiving, the period without Warnock would probably be about two weeks, Collins said. He estimated roughly 25 nominees could be confirmed before the new session starts Jan. 3.

Amy Steigerwalt, a political science professor at Georgia State University who studies judicial nominations, said scheduling a hearing suggests Democrats “want to see as many nominations as possible moved through to the floor stage.”

Beyond that, “all eyes will be on Schumer to see how much of the remaining floor time is devoted to nominations as opposed to potential legislative priorities,” Steigerwalt said in an email. But she said it’s “highly likely” a majority of the Senate’s work for the rest of the session will be on judicial nominations.

Progressives have already pushed Democrats to continue that work until the clock runs out. In a letter to senators the day before the midterms, 214 progressive, civil rights, labor, and environmental groups called on the lawmakers to “redouble” their efforts until every pending judicial nominee is confirmed.

“We should have no faith that Senate Republicans will allow the confirmation of nominees with the breadth of professional and demographic diversity as those we’ve seen confirmed during the first two years of President Biden’s term,” Rakim Brooks, the president of the Alliance for Justice, said in a statement Wednesday.

Republican Senate control would slow the pace of Biden’s judicial appointment numbers, particularly for appellate nominees. The last time Republicans were in control of the Senate under a Democratic president was during the Obama administration and just two circuit and 18 district nominees were confirmed in two years.

There are currently 119 current or expected vacancies in the federal courts, according to US Courts data. That includes four future or current circuit vacancies without a pending nominee for seats in Fifth, Fourth, First, and Seventh Circuits.

Schumer, who will return next year after winning reelection, didn’t respond to a request for comment.

—With assistance from Courtney Rozen, Brandon Lee, and Andrew Small