Eleanor McManus is a public relations expert and former CNN journalist, and also a partner at Washington law firm Davis Goldberg & Galper. Yet she isn’t a lawyer.

Some law firms in the nation’s capital have incorporated non-legal experts as co-owners, capitalizing on a unique District of Columbia Bar rule modification that could be instructive as changes to the same rule are considered elsewhere.

“To give the best legal advice, we needed the best PR mind,” said Davis Goldberg & Galper partner Adam Goldberg. “Her value here is equal” to the other partners.

The D.C. Bar rule change, implemented decades ago, allows the firm to leverage the skill set McManus brings to the boutique, which lies “at the intersection of business, law, policy and politics, and the media,” according to the firm’s website.

Ethics lawyers say they’ve seen more inquiries over the past several years about the rule that makes D.C. the only U.S. jurisdiction allowing nonlawyers as firm partners. This is partly due to firms looking to differentiate themselves where they can in the intensely competitive and slow-to-change U.S. legal market.

Yet the multi-national accounting and auditing behemoths that sell legal services in scores of countries have been effectively shut out of the U.S. market in large part because of state bar rules that forbid lawyer fee-sharing or partnerships with nonlawyers. D.C.'s version of Rule 5.4 has allowed them a different way to try to gain entry. 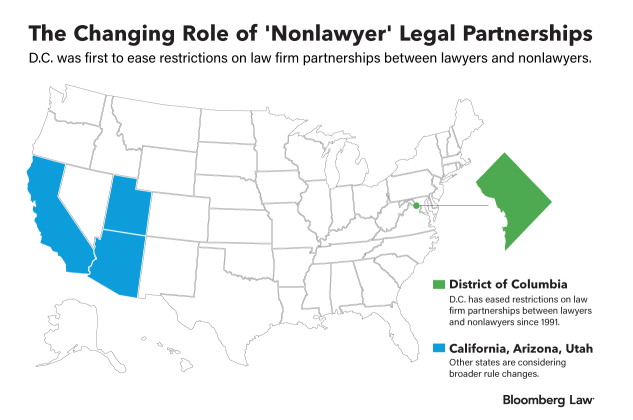 D.C. Bar Rule 5.4 became effective as part of the adoption of the D.C. Rules of Professional Conduct at the beginning of 1991. A D.C. Bar model rules committee previously found that lawyers already were working with everyone from psychiatrists to engineers. It made sense to open the system at least a bit to allow them to be recognized as important to law firm success, the panel found.

The ABA Model Rule 5.4, which most states have adopted in part or whole, forbids lawyer/nonlawyer partnerships if any of the activities of the partnership consist of the practice of law. The D.C. rule allows for such partnerships only if their “sole purpose” is to provide legal services to clients, among other conditions. It doesn’t permit corporations or investment banks to acquire parts of law partnerships or law practices.

Though law firms began testing the regulation the moment the Washington rule took effect, D.C. Bar spokeswoman Andrea Williams said that the group doesn’t keep statistics on Rule 5.4 implementation, including how many firms have used it to employ nonlawyer partners.

Attorneys who assist other lawyers with Rule 5.4 questions also were reluctant to identify firms, attorneys, nonlawyers, or other businesses that have inquired about the law, and which have used the rule to help set up shop.

But ethics lawyers and bar officials also said they know of a number of instances in which Rule 5.4 has been utilized. This includes at least one Big Four accountancy and at least one former AmLaw 100 law firm.

Zuckerman Spaeder ethics and professional responsibility partner Mark Foster said he’s received hundreds of queries from law firms and nonlawyers about how to utilize D.C.'s Rule 5.4 over the last several years, and confirms he has assisted “a major accountancy” in using the D.C. regulation to bring to life a new legal operation.

“They’re trying to tiptoe around the edges of Rule 5.4, it’s fair to say,” said Foster.

Law firm outposts with non-lawyer partners enabled by D.C. Rule 5.4 are usually but not always based in Washington, said Foster. He declined to spell out the formula that he and Zuckerman Spaeder senior staff attorney Jason Acton use to ensure that the operations they help set up fit within the rule.

Like Davis Goldberg & Galper, other small Washington firms also show how the rule can be used. For more than a decade, for example, lobbyist Jeff MacKinnon was a name partner with Ryan, MacKinnon, Vasapoli and Berzok, which touted the fact that it had a nonlawyer as a partner, he said.

The issue of nonlawyer law firm partners is especially timely as California, Utah, and Arizona have created task forces in recent months to study their bars’ versions of Rule 5.4 and related rules. Their aim is to improve legal system access for the many middle-income and poorer Americans who can’t afford attorneys in civil and family court cases.

One or more of those states could ultimately scrap their versions of Rule 5.4, which would be a much bolder move than D.C.'s adjustment to the rule.

Big Law leaders also are watching how the proposed changes elsewhere could affect the Big Four’s ability to compete in the U.S. Some U.S. law firm leaders have expressed wariness about competing against these deep-pocketed companies, which tend to be more advanced than firms in developing and implementing advanced technologies that can streamline legal services.

The other states’ activity could result in changes that are potentially more significant by “an order of magnitude” than those that have resulted from D.C.'s looser Rule 5.4, said Foster.

A KPMG spokesman declined to comment, other than to say “KPMG US does not provide legal services.” A PwC spokeswoman declined comment, and representatives from EY and Deloitte did not return requests for comment.

One of the most consequential law firm uses of D.C. Rule 5.4 was also one of the first.

The experiences of the former antitrust and intellectual property-focused Washington law firm Howrey & Simon made it plain that firms could use the rule to reward key nonlawyers—as long as the firm stayed within D.C.'s geographic limits.

In 1991, Howrey promoted Chief Financial Officer Abe Isenberg to partner, becoming the first law firm in the country to make a non-lawyer a partner. A Washington Post article from the time said it was “a move that some lawyers fear will lead to an erosion of professional standards if it is copied by others.”

Soon after, Howrey also made several nonlawyer economists partners, said Bob Ruyak, who sat on the firm’s executive committee at the time.

The moves made sense for several reasons, said Ruyak. First, partnerships, and financial perks that come with them, were a reward for nonlawyers who had made significant contributions to the firm’s success.

Moreover, the cost savings made by bringing them on were passed on to clients. “It was a great sales tool for clients, it really was,” said Ruyak.

By the end of the decade, Howrey reversed course after its plans to expand to Los Angeles were threatened. The State Bar of California made it clear that it would object to Howrey taking root there while boasting nonlawyer partners, which were at odds with that state’s bar rules.

Isenberg and the economists stayed with the firm, but were no longer partners, Ruyak said. Howrey dissolved in 2011.

“It works fine, and hasn’t destroyed the profession,” he said.