In the wake of unrest following George Floyd’s murder, a growing number of states are introducing laws to hold protesters criminally and civilly responsible for property damage that occurs during protests. Civil rights attorney Jilisa R. Milton contends these laws seek to deprive Black people of their First Amendment right to free speech and assembly by imputing criminality to them.

Is justice really blind? When truly assessing the equitability-related outcomes of legal procedures in the U.S., the answer is no.

Procedural justice is defined as seeking fair processes. This is important, as a person’s perception of fairness is strongly impacted by both the result of a process and the quality of the person’s experiences while engaging in the process.

Democratic systems are only effective if they grant participants equal access to the political process and provide societal outcomes that are considered just and fair by the entirety of a citizenry. Failure to do so might compromise the legitimacy of a system, and create division, inequity, mistrust, and exclusion.

In recent years, a large facet of the legal community has admitted that there is a clear racial inequity in the outcomes of the criminal justice system. It is also true that many Black people in the U.S. do not feel that the legal system, or the process of engaging with the legal system, is fair. To many, it is overly punitive.

The Black Lives Matter (BLM) movement emerged as a continuation of previous movements for racial justice to name the ways that Black people are harmed by the criminal justice system, including by police officers, prosecutors, prisons, and empowered vigilantes with a proven degree of impunity.

Historically, these practices have been fueled by racially targeted tropes about Black people being criminal, in need of supervision, violent, and deserving of harsh punishment.

When they speak out, however, Black people are met with aggressive resistance through the perpetuation of the very tropes they are insisting on eliminating. For example, after the surge of protests of 2020, immediately following the killing of George Floyd by a police officer, White vigilante agitators arrived at protests to confront activists, and anti-protest bills with broad, sweeping criminalization language surged across the country through the state legislatures, presenting harsh felony charges for protesters within certain proximity to resulting property damage.

Some media outlets slammed the protesters, using charged language not only about the individual actors engaging in property crimes, but any protester involved with the movement, and any group of people affiliated with the cause.

State legislatures proposed bills that include overly harsh charges for people who allegedly engaged in petty crimes during protests, and even proposed the elimination of civil and criminal liability for those who harm or kill protesters. The bills were highly politicized, and not surprising considering other moments in history, where hyperbolic, criminalizing language was used to describe a need to quell the Black voices or punish the Black community, while little to nothing was done on a large scale to address the issue of police brutality and other oppressive actions in the Black community. 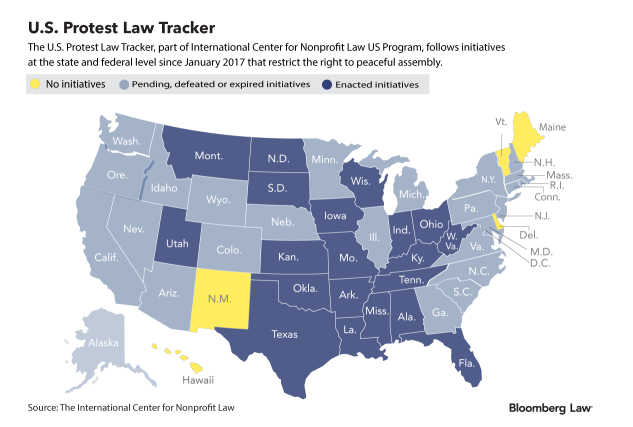 Source: The International Center for Nonprofit Law, reproduced with permission

The results of Kyle Rittenhouse’s trial reignited activists to speak out about the historical continuation of laws that encourage vigilante justice through the legal system, especially when Black people “cause trouble.” (Rittenhouse, who lived across the state line in Illinois, shot and killed two White men at the scene of civil unrest in Kenosha, Wisc., prompted by the police shooting and paralyzing of Black man.)

This triggers strong memories of post-Civil War Black communities being silenced by racial violence when they engage in procedural justice seeking measures to accomplish economic growth. In some instances, entire Black communities bore the brunt of White anger without protection through criminal or civil process. On the contrary, those processes were used as weapons against positive change.

Rather than respond to recent demands for change in the justice system or policy changes from BLM and other groups, at least 36 anti-protest laws have been enacted, and at least 50 are still pending.

The criminal justice system has been able to avoid meaningful change by focusing on racially biased, controlling images of Black people, and fallaciously blaming Black communities for this misfortune. This has been accomplished by using the acts of a few to label an entire movement.

By the end of June, at least 11,000 people had been arrested in George Floyd-related protests, and by November 2020, at least 25 people had died in relation to the unrest. Still, many newly proposed anti-protests bills pose strict consequences for even being proximate to areas where property crime occurred during race related protests.

Civil law cases against protesters also followed, implicating significant numbers of people together, regardless of the lack of strong evidence that suggest respondents approximately caused physical damage themselves while engaging in protest.

Notably, these egregious bills and frivolous legal practices also greatly impede upon one very important process used by American citizens to seek change: the First Amendment right to free speech, and to peacefully assemble. Questions related to the impact on civil liberties, as well as First Amendment-related lawsuits are emerging in response to anti-protest bills, hoping that the courts will prevent the use of these laws to unconstitutionally burden protest activity. However, as an aside, the damage has been done to a degree.

Fighting for procedural justice would create processes that produce equitable results. It would also eliminate the practice of one sector of society bearing the weight of punitive practices.

It would also apply assessment, since institutional structures are as fallible as we are. Unfortunately, some legal minds remain complicit in the perpetual exclusion of Black people, but hopefully we will work toward a society where justice isn’t choosy—or selective—and there isn’t a price for seeking it.

Jilisa R. Milton is a civil rights attorney, policy analyst, community organizer, social worker, and abolitionist of harmful practices against Black people. She is a survivor of police violence and a co-founder of Black Lives Matter Birmingham Chapter. Currently, she serves as national vice-president of the National Lawyers Guild.