Not since the nomination of Thurgood Marshall in 1967 has criminal justice dominated high court confirmation hearings that often revolve around culture war issues like abortion, religious freedom, and gun rights. Criminal issues came up at the high court hearings of former prosecutors Sonia Sotomayor and Samuel Alito to boost their credentials, not shred them.

“It was expected that (Jackson) was going to get more questions on criminal justice because of her race,” Theodore R. Johnson of the Brennan Center for Justice. “That said, it is without question” that her background “has provided a lot of material for the criminal-justice-centered questions she’s been getting, such that they can be more pointed and more specific.”

University of Massachusetts professor Paul Collins, a co-author of an empirical analysis of Supreme Court confirmation hearings between 1939 to 2009 published in the American University Law Review, said nominees of color receive “substantially more questions about crime than white nominees.” Citing updated figures that include 2020, Collins said 15% of questions nominees of color received were about crime whereas it accounted for only 4% of questions white nominees received. 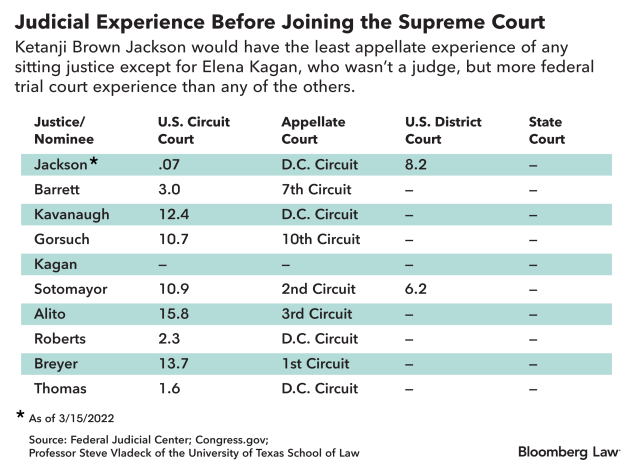 Senate GOP leaders said after Jackson was nominated in February by President Joe Biden that they’d raise criminal justice issues when vetting her. They promised to scrutinize her role as a former public defender, member of the U.S. Sentencing Commission, and as a district judge in the nation’s capital.

But with an increase in murder rates, carjackings, and other crimes making headlines this year across the country, a Republican strategy for the hearings ultimately crystallized around painting Jackson as soft on crime. “People are just really concerned about crime in the streets,” Sen. Marsha Blackburn (R-Tenn.) told Jackson.

Senate Judiciary Chair Dick Durbin (D-Ill.) said the hearings were an opportunity for the minority party to exploit the issue ahead of the midterm elections.

The degree to which they’d coordinate and press their efforts, however, wasn’t apparent until the first day of questions.

Republicans, including Sens. Josh Hawley of Missouri and Ted Cruz of Texas, led the grilling on Tuesday. Things intensified on Wednesday with Lindsey Graham of South Carolina unleashing a torrent of criticism. He raised his voice and repeatedly interrupted Jackson as she responded to his questions. Graham was followed by Mike Lee of Utah and then Cruz, who tangled with an exasperated Durbin over the line of questioning before his time was cut off. Their message: Jackson has “a pattern of letting child porn offenders off the hook for their appalling crimes, both as a judge and as a policymaker.”

In defending her record while a federal trial judge in Washington from 2013-2021, Jackson called child pornography “some of the most difficult cases” judges can face. She repeatedly said that she considered a range of factors when sentencing a defendant convicted of such offenses and imposed lengthy term of supervision once a prison term is completed.

The tension revived later on Wednesday when Jackson told Hawley more than once she’d already addressed the matter when he sought more answers.

Sen. Tom Cotton (R-Ark.) and other members peppered Jackson on related topics, including crime statistics, recidivism, and compassionate release. Sen. John Cornyn (R-Texas) and Graham led the questioning about her representation as a public defender of post-9/11 terror detainees.

If confirmed as expected, Jackson would have more trial court experience than any current sitting justice. She’d also be the first federal public defender on the bench.

“There’s a real asymmetry here, in the sense that if you have a background in criminal law, and that background is on the prosecution side, it’s a cakewalk,” said Clark Neily of the libertarian Cato Institute who wrote in support of Jackson’s nomination. “By contrast, it’s much more challenging to get a former public defender or other person with criminal defense experience.”

Marshall, the court’s first Black justice, was the last member of the court to have significant experience representing indigent criminal defendants. Nearly 47% of questions that he received at his confirmation hearing were related to criminal justice, according to the empirical analysis.

Criminal justice accounted for 5% of the questions for Sotomayor, who was a county prosecutor early in her career and a federal trial court judge, according to Collins’ research with University of Georgia School of Law professor Lori Ringhand.

Collins’ research shows that civil rights and judicial philosophy are the questions most asked of high court nominees.

While Jackson has received a fair number of questions about her philosophy and process for deciding cases, there hasn’t been as much about other hot-button issues as in recent confirmations.

Some of those topics emerged Wednesday in questioning from Cornyn on abortion and gun rights, and religious freedom. She declined to offer views on fetus viability around the abortion controversy or venture beyond the factors used by the high court for overturning precedent. Guns and abortion are currently before the court.

Neily guessed that a move away from the usual lineup of cultural issues may partly be due to a refusal by recent nominees to answer questions about issues that may come before them on the Supreme Court.

“The playbook is pretty well established and I suspect that a growing number of senators realized that there’s not a whole lot of sense in pushing a nominee on some of those hot button issues,” Neily said.