More than $600 million has been spent on online ads so far in the 2020 election cycle, according to Advertising Analytics, which tracks political ads.
Photographer: Denis Charlet/AFP via Getty Images

Hundreds of millions of dollars in online political ad spending will go largely unregulated in this year’s elections, leaving open a channel for hidden election influence by foreign powers and others.

Partisan divisions in Congress and on the Federal Election Commission have stalled efforts to require more disclosure of who’s funding paid messaging on Facebook and other internet platforms, which Robert Mueller’s special counsel investigation found Russia used to try to sway the 2016 election.

And a recent court decision could set back efforts by states including California, New York and Washington to fill the breach left by federal regulators. In the latest development, a court ruling required Maryland to permanently cease enforcing parts of its online ad disclosure law against newspapers and TV stations that have websites selling political ads.

“It’s undeniable that our elections remain vulnerable to foreign interference,” said Sen. (D-Va.), adding the threat is increased by the coronavirus pandemic. “Especially now, during this period of fear and uncertainty, our communities are particularly vulnerable to disinformation.”

Intelligence agencies are working to identify and combat efforts to undermine democracy, Warner said in the statement to Bloomberg Government, adding that he would continue to push Congress to pass legislation to shine a light on the money behind online political ads and other measures to counter foreign influence. But a Warner-cosponsored measure, known as the Honest Ads Act (S. 1356), that aims to improve transparency for online political ads could be vulnerable to the same type of court challenge that struck down the Maryland law. 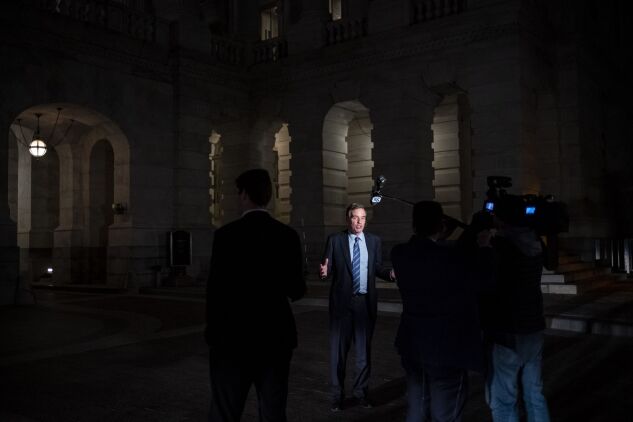 Warner is the ranking Democrat on the Senate Intelligence Committee, which concluded that Russia’s efforts in 2016 were aimed at tilting the election toward President Donald Trump. The Intelligence Committee recommended Congress should consider providing more transparency for online political messages, but no action has been taken on measures including the Honest Ads Act, which is cosponsored by Sens. (D-Minn.) and (R-S.C.).

More than $600 million has been spent on online ads so far in the 2020 election cycle, according to Advertising Analytics, which tracks political ads. That accounts for 29% of all paid media spending — which also includes broadcast TV, radio and cable — tracked by the firm though mid-May.

Advertising Analytics includes only ads on . and , which voluntarily track and disclose the political ads they sell. The firm estimates only about half of all digital political ads are on those platforms and says there’s no way to know for sure the total amount being spent on online political ads.

The Maryland ruling handed down on May 8 by the U.S. District Court for Maryland ordered the state to pay $400,000 for attorney fees to the Washington Post and other newspapers, which challenged the online ad requirements. That decision followed a federal appeals court ruling that found unconstitutional states’ requirements for newspapers and TV stations with websites to track and publish information about the online ads they sell.

The Honest Ads Act has “the exact same problem” as the Maryland law struck down in court because it compels speech by private organizations in violation of the First Amendment, said David Keating, president of the Institute for Free Speech, a nonprofit that frequently challenges disclosure requirements and other campaign finance laws. Keating noted that state and federal candidates and political organizations are already required to disclose their campaign spending, which should provide enough transparency without additional rules affecting others.

The fight for disclosure regulation will continue because the court rulings on the Maryland law don’t prohibit all regulation, such as requirements that ads carry disclaimers about the ad sponsor, said Erin Chlopak, a lawyer with the nonprofit Campaign Legal Center and a former FEC staff attorney.

The courts focused on what they “viewed to be a mismatch between the mandated disclosure of political ad information by Maryland newspaper platforms and the state’s interest in combating the threat of foreign interference,” Chlopak said. But the rulings “leave room for other legislation” to deal with the threats to the integrity of elections posed by deceptive online ads.

To contact the reporter on this story: in Washington at kdoyle@bgov.com