President Barack Obama and Vice President Joe Biden pose with Supreme Court nominee Elena Kagan at the announcement of her nomination to Supreme Court on May 10, 2010.
TIM SLOAN/AFP via Getty Images

President Joe Biden’s meeting with Senate Judiciary Committee leaders at the White House last week was the first of many moments of stagecraft surrounding a Supreme Court vacancy.

Biden, like his predecessors, wants to convey careful deliberation and outreach to senators across party lines before choosing a nominee.

The reality is that as the confirmation process has grown more partisan, the rituals are often as much about political theater as substance, something Biden knows well himself as a former senator and chair of the judiciary panel. Occasionally, a candidate’s performance can sink a nomination.

Here’s a look at rituals to come as Biden prepares to select the first Black woman justice to succeed Stephen Breyer.

The White House interviews contenders. The importance of this varies by administration, legal scholars and Senate veterans said.

Biden administration officials likely know who they’re interested in as Breyer’s vacancy wasn’t unexpected, said Ronald Weich, who was chief counsel to former Senate Majority Leader Harry Reid (D-Nev.) and Sen. Edward Kennedy (D-Mass.). “But these meetings and the current consideration of candidates is very meaningful and can change the course of the nomination,” he said.

Breyer, for example, was recovering from a bicycle accident at the time Bill Clinton interviewed him for the Supreme Court seat vacated by Byron White in 1993. Still in pain, Breyer didn’t impress Clinton, who chose Ruth Bader Ginsburg, CNN legal analyst Jeffery Toobin wrote in his book “The Nine.”

Amy Coney Barrett’s offer from Trump came during her meeting at the White House three days after Ginsburg died in September 2020, according to her Senate Judiciary questionnaire.

The nominee is usually introduced at the White House. While the nominee’s remarks are typically brief, the president’s comments reveal how the administration would like to see the nominee presented to the country.

The nomination ceremony “is a moment for the president to frame up what’s at stake,” Jeremy Paris, who oversaw nominations for former Judiciary Committee Chairman Patrick Leahy (D-Vt.). Their remarks can include the reasons for the pick, set a narrative, and explain why they selected this person, Paris said. 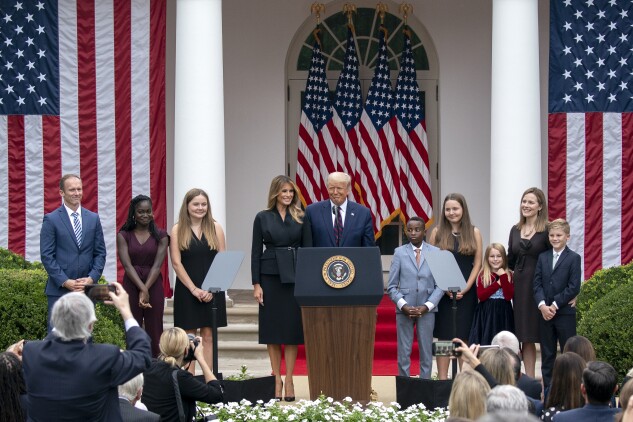 Presidents try to humanize the candidate. Barack Obama highlighted Sonia Sotomayor’s background as a child of immigrants who overcame obstacles to rise to the top of the legal profession. He also noted her interest in the law was sparked by reading Nancy Drew novels.

Trump noted that Barrett would be “the first mother of school-aged children ever to serve on the U.S. Supreme Court,” a theme repeated throughout her confirmation process.

The nominee next meets with senators behind closed doors.

“These are called ‘courtesy visits,’ which suggests a social call, and sometimes they’re like that, but sometimes they’re substantive interviews with senators,” Gregg Nunziata, a former general counsel to Sen. Marco Rubio (R-Fla.) and Senate Judiciary Committee chief nominations counsel while Arlen Specter (R-Pa.) was chair.

George W. Bush’s 2005 faltering nomination of his White House counsel Harriet Miers wasn’t helped any by interviews with senators. In an interview with, Leahy, for example, Miers appeared to confuse conservative Chief Justice Warren Burger with liberal Earl Warren, when asked who her favorite justice was, the Washington Post reported at the time. Miers answered only “Warren” at first. 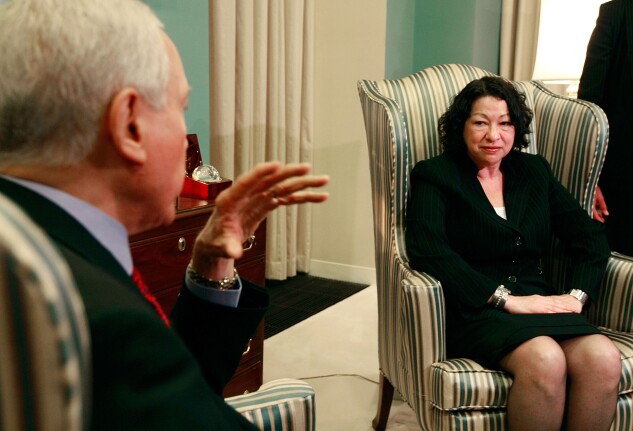 During her 2010 confirmation, Sen. James Risch (R-Idaho) asked whether Elena Kagan could grasp the importance of the Second Amendment to many Americans, given that the New York City native had never owned a gun. Kagan promised that, if confirmed, she’d ask her conservative colleague, Antonin Scalia, to take her hunting. It’s a promise that she kept more than once.

In modern presidencies, the White House has appointed a “sherpa.” They typically are former lawmakers, or others with ties to the Senate. The sherpa serves as an adviser to the White House and helps the nominee navigate the Senate, said Weich, who is dean of the University of Baltimore School of Law.

Biden has picked former Alabama Sen. Doug Jones (D) for this task. Former Republican Sens. Jon Kyl, of Arizona, and Kelly Ayotte, of New Hampshire, served in that role for Trump’s first two picks. Barrett, who was confirmed during the first year of the pandemic, didn’t have an official guide. 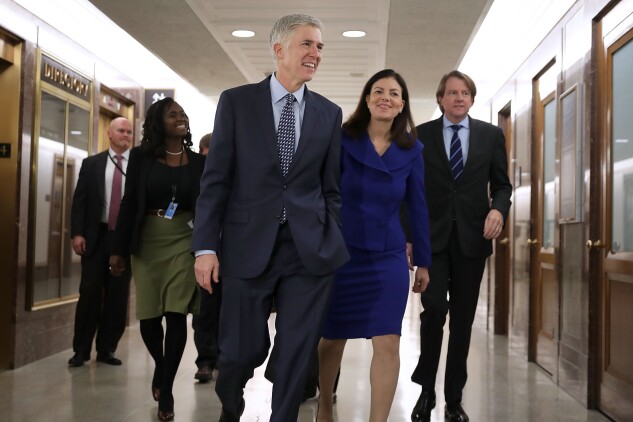 Neil Gorsuch is pictured with former U.S. senator Kelly Ayotte (R-N.H.) arriving on Capitol Hill to meet with lawmakers about his nomination to the Supreme Court.
Chip Somodevilla/Getty Images

The confirmation team, which also consists of White House and Justice Department officials, is responsible for preparing the nominee for the Judiciary Committee hearing.

That preparation includes a so-called “murder board” in which team members play committee members and question the nominee, said Paul Collins, a professor at the University of Massachusetts who researches the Supreme Court confirmation process.

The hearings are a chance for the public to see how nominees present themselves and handle lawmaker inquiries.

“Throughout American history, nominees have evaded certain questions, but they’ve also answered lots of other types of questions,” Collins said. “What’s a relatively new phenomenon is that nominees are really answering almost no question of substance.”

A turning point came in 1987 when Robert Bork’s candid answers about his conservative views helped derail his nomination. Six years later, Ginsburg said at her confirmation that nominees should give “No hints, no previews, no forecasts” as to how they might rule in cases that might come before them but did talk at length about views on constitutional issues such as civil rights.

Nominees are prepped to provide little in the way of substantive answers to questions from lawmakers, who complain the hearings are an empty exercise. 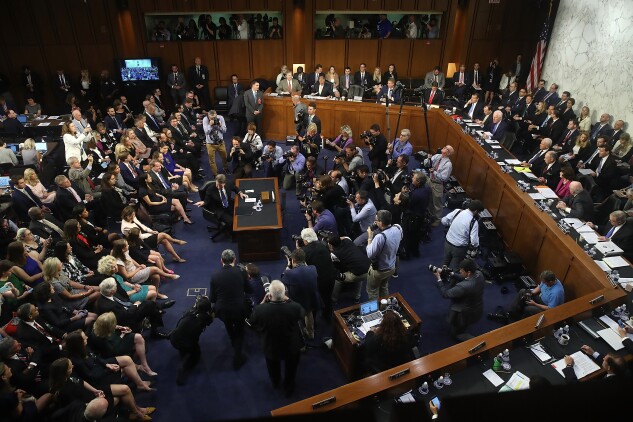 Brett Kavanaugh arrives for a hearing before the Senate Judiciary Committee Sept. 4, 2018 to answer lawmaker’s questions about his nomination to Supreme Court.
Win McNamee/Getty Images

Staging goes into who flanks the nominee at their hearings. Often family, friends and people who are working on their nomination sit behind them to show support.

Rachel Brand, currently Walmart’s chief legal officer, sat silently without expression behind Alito and Chief Justice John Roberts during their confirmations while serving in the Bush Justice Department. She helped comfort Alito’s wife, Martha, when a line of questioning prompted her to start crying and leave the hearing room.