Clarence Thomas’ quest to cement conservative principles into U.S. Supreme Court precedent could soon pay off, as he marks his 30th anniversary as a justice.

Thomas, 73, who isn’t shy about dissenting alone when he thinks the court got it wrong, may see some of those dissents transformed into majorities on a court where ascendant conservatives now hold a 6-3 majority.

Even those who don’t agree with Thomas’ approach to the law acknowledge that his influence is rising as the court prepares to consider cases ranging from abortion to guns.

“There are instances where yesterday’s radical views become today’s mainstream constitutional interpretation,” said Yale law professor Justin Driver, who noted that Thomas has been able to drag “the constitutional conversation in his direction.”

When Thomas joined the court in 1991, it was under a cloud due to allegations of sexual harassment by Anita Hill during his confirmation hearings, said Carolyn Shapiro, of the Chicago-Kent College of Law. Shapiro, like Driver, emphasized that she often doesn’t see eye-to-eye with Thomas.

Nevertheless, Driver said his confirmation controversy is part of why Thomas’ jurisprudence has received insufficient attention. “People have failed to grapple with his views,” Driver said.

Both noted that the common perception was that Thomas followed the lead of the late Justice Antonin Scalia, who Thomas said is the “one person I truly miss at the court” at a Heritage Foundation event Thursday marking his anniversary. Scalia is known as the father of the originalist movement, the idea that the Constitution should be interpreted according to its common meaning at the time of the founding.

“From the very beginning, he was much more of a leader on the court than people recognized at the time,” said Carrie Severino, who clerked for Thomas and now heads the conservative advocacy group Judicial Crisis Network.

She pointed to cases dealing with how much deference courts should give to administrative agencies’ interpretations of statutes.

Thomas has long been skeptical about such deference and he eventually brought Scalia around to his way of thinking, Severino said. In a 2020 dissent from the court’s decision not to hear a case, Baldwin v. United States, involving the Administrative Procedure Act, Thomas lamented that the core of agency deference—a case called Chevron v. NRDC—"is in serious tension with the Constitution, the APA, and over 100 years of judicial decisions.”

There’s now a clearer majority of justices who appear to want to cut back on what’s been the law for decades, even before Thomas arrived.

While Severino said Thomas has long been an “intellectual leader for the constitutionalists on the court,” she said the pattern is accelerating. “Justice Thomas’s greatest contributions to the law may still lie ahead of him,” Severino said.

His influence may be easier for the public to see now that he’s taking on a more prominent role in oral arguments, she added. Thomas, who went 10 years without asking a question during argument, recently started to reengage with advocates. His comments are frequently picked up by the other justices, who tend to ask follow-up questions.

If Thomas’ views prevail, other precedents could get overturned.

In some instances, we’re seeing that Thomas has “moved from an outlier position to seeing his vision prevail,” Shapiro said.

And the fact that those changes in the law could be “enormously disruptive,” is something that isn’t a concern for Thomas, Shapiro said.

“One thing that’s is striking about his opinions is that he doesn’t care how his opinions would disrupt” the status quo, she said.

Thomas wrote in a 2019 concurring opinion that “in my view, if the Court encounters a decision that is demonstrably erroneous—i.e., one that is not a permissible interpretation of the text—the Court should correct the error, regardless of whether other factors support overruling the precedent.”

A willingness to overturn precedent is another way in which he differed from Scalia. “I’m an originalist and a textualist, not a nut,” Scalia said in 2008, a remark that’s been interpreted to refer to Thomas’ comfort with overturning longstanding precedent.

Thomas is less willing to compromise about getting the law right, said Elizabeth Slattery, of the libertarian public interest law firm Pacific Legal Foundation. That includes on issues ranging from the structure of government to individual rights, Shapiro said.

And he’s not afraid of “going it alone” when none of his colleagues agree, Driver said.

During the Roberts Court—dating to 2005 when John Roberts was named chief justice—John Paul Stevens was the only one of the 14 justices to have served on the bench who dissented alone more often than Thomas. 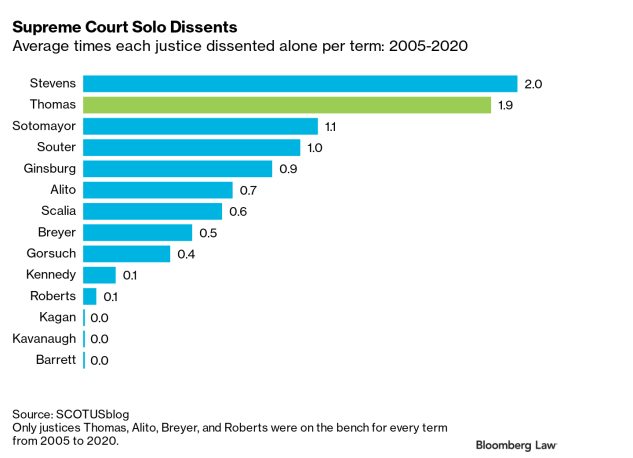 Convincing other justices to join in some of those dissents is going to be an “uphill battle” for Thomas, Slattery said. He pointed to a 2014 concurring decision arguing that while the First Amendment’s idea of the separation of church and state likely prevents the federal government from creating a national religion, it probably doesn’t bind the states.

The “First Amendment was simply agnostic on the subject of state establishments; the decision to establish or disestablish religion was reserved to the States,” Thomas said. No other justice joined that part of his decision.

Thomas, though, has been “extremely consistent in pushing his vision of the Constitution,” Shapiro said, regardless of how out of step it may be with the mainstream.

In a 2019 case about whether the Eighth Amendment constricts the states as well as the federal government, Thomas once again stressed that he thought the court got the right result via the wrong method.

Instead of “incorporating” the Bill of Rights to the states via the due process clause, the court should do so via the “privileges or immunities” clause—a route seemingly barred by the court’s case law dating back to the 1870s.

As “I have previously explained, this Court marginalized the Privileges or Immunities Clause in the late 19th century by defining the collection of rights covered by the Clause quite narrowly,” Thomas wrote in his concurrence, citing another concurrence he wrote nearly a decade before.

“I’m not surprised, but pleasantly pleased, that he’s become the kind of justice we expected him to be,” Jipping said.

It’s no coincidence that the current court is set to take on cases addressing abortion, guns, and maybe affirmative action, since the newer justices align more with Thomas’ legal view.

For half a century, the court has consistently refused to reinstate state laws that ban abortion before “viability,” which is the line the court set in 1973 Roe v. Wade and the cases that followed. That could change when the Supreme Court hears Dobbs v. Jackson Women’s Health Organization, a case involving Mississippi’s 15-week abortion ban.

Many constitutional scholars think Roe‘s days are numbered, something Thomas has been pushing for since he joined the court.

Gun rights is another area where the court is moving in Thomas’ direction. He objected to the court repeatedly turning away Second Amendment cases, lamenting that the Second Amendment is treated like “a second-class right” in a 2015 dissent from denial.

Next month, the court will hear the biggest gun rights case in a decade, New York State Rifle & Pistol Association Inc. v. Bruen. The court, which now includes three conservative appointees of former President Donald Trump, seems primed to expand the Second Amendment right to carry a gun outside of the home, calling into question carry permit schemes in a swath of states.

Yet another blockbuster case of particular interest to Thomas could still get added to the court’s docket. The justices have signaled an interest in taking up the latest challenge to university affirmative action programs by asking the federal government to weigh in on the issue in Students for Fair Admissions Inc. v. President & Fellows of Harvard College.

Thomas, a beneficiary of affirmative action at Yale Law School, has argued that such programs hurt minority students by stamping them with “with a badge of inferiority,” as he said in a 2013 opinion.

He is now in a position to lead the court to strike down not only affirmative action, but “any form of race consciousness,” like the Voting Rights Act and disparate impact claims, Shapiro said.

Thomas’ influence also extends to lower courts, where a number of his former clerks—who Thomas referred to as his “kids” during the Heritage event Thursday, which was co-sponsored by the Gray Center for the Study of the Administrative State—now sit as judges, said Goodwin partner William Jay.

It’s “well worth watching whether any of them seek to develop points that Justice Thomas has flagged in his separate opinions over the years,” Jay said.