Florida pharmacist Ademola O. Adebayo is the last of nine people to face justice in the case.
OIC VENANCE/AFP/Getty Images

Many state courts are taking steps to increase access to justice, but they are missing one vital point: they charge defendants hundreds of dollars merely to respond in a civil case. This is one of the biggest hindrances to justice in the U.S., says George Simons, CEO and co-founder of SoloSuit. He describes how filing fees particularly impede consumers in debt collection lawsuits.

While state courts race to increase access to justice, their patrons still face the highest hurdle on their own: paying civil filing fees. Many state courts charge defendants large filing fees to respond to civil lawsuits. These fees block justice in the U.S. court system.

California, Arizona, and Minnesota are good examples of states attempting to increase access to justice while charging defendants enormous filing fees. These fees are charged for all types of civil lawsuits, but are particularly relevant to debt lawsuits where defendants are being sued because, presumably, they don’t have any money.

Although some states provide fee waivers, this practice only helps the lowest-income people and leaves people in other income groups with onerous fees. Moreover, for defendants who can pay the fee, they still must struggle to calculate it and to file their documents with the court—a difficult challenge on its own.

The Supreme Court of Arizona recently changed its rules to allow non-lawyers to have an ownership interest in law firms and allow paraprofessionals to provide limited legal services. These changes are part of more sweeping reforms in Arizona designed to help address the legal needs of low-to-middle-income individuals more efficiently and cost-effectively.

But amidst all of this change, Arizona courts seem to have missed one vital detail: they charge defendants up to $245 merely to respond to a lawsuit, which is 19% of an average Arizonian’s paycheck. And unlike some states, Arizona doesn’t provide a fee waiver. 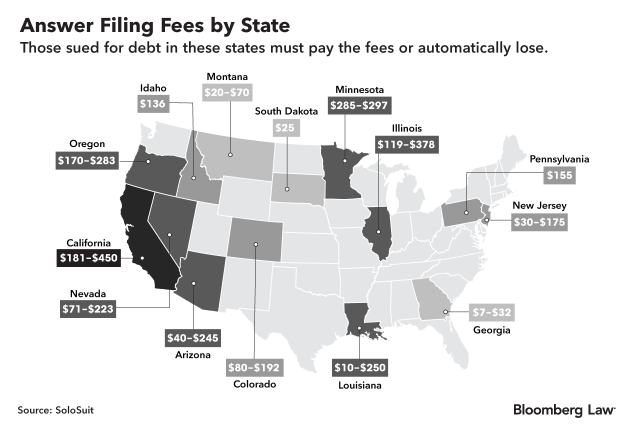 Minnesota charges defendants up to $297 to respond to a debt collection lawsuit.

California is among several states pursuing a legal regulatory sandbox. California courts offer an array of online dispute resolution services, and the California legislature recently approved a bill that will allow courts to continue hosting remote hearings through 2023.

In January, Gov. Gavin Newsom (D) requested the fiscal 2022-2023 budget for the judicial branch be increased from $4.7 billion to $4.9 billion, to among other things, improve access to justice. Some California courts use optical character recognition software to make documents available online immediately without human intervention. The Superior Court of California in Los Angeles County launched the chatbot LACourtConnect during the pandemic.

California charges defendants up to $450 to respond to a debt collection lawsuit.

More than a quarter of all states (14) charge defendants Answer filing fees in civil lawsuits. Many more states charge filing fees for other types of documents like motions.

Creating regulatory reform to increase access to justice while keeping filing fees is like raising the castle of justice’s gate to a visitor but not lowering the drawbridge for them to cross the moat.

A large filing fee isn’t the only obstacle a defendant needs to overcome to access justice. Many courts also make it difficult for defendants to obtain filing information.

In the unlikely event that a self-represented litigant succeeds in determining the mailing address, they then need to determine the filing fee. Answer filing fees range from $7 to $455 in the 14 states. Some states provide fee-waivers, but these are usually many-page documents that only help people who can definitively prove they are within 125% of the income poverty level.

Frequently, the filing fee is not listed online. If it is, it is usually hidden deep within the court website in an obscure PDF file called a “fee schedule.” For example, the fee schedule for California courts is a 16-page document with obfuscating titles like “Complaint or other first paper within small claims jurisdictional limit filed by assignee of record (with declaration)”—it is the opposite of an In-N-Out menu.

If the fee isn’t available online, the only way to obtain the fee is by calling the court. This doesn’t always go well. We have record of individuals calling courts only to be given incorrect filing fee information and filing instructions.

If a self-represented defendant, against all odds, succeeds in determining the mailing address for a court, calculating and paying the filing, and ultimately filing the document, their document may still be rejected by the court. Some courts take an adversarial stance against consumers attempting to file.

The California Superior Court of Orange County, for instance, rejects consumer filings for a long list of inconsequential reasons: the document lacks a wet signature, the document is not on pleading paper, the filing fee is paid with a personal check, or the document lacks the defendant’s name in the body of the answer.

In short, it is difficult for a defendant to respond to a lawsuit.

The U.S. ranks 126th for access to justice on the Rule of Law Index. It’s dropped over 40 spots in the last five years. We rank worse than Venezuela. Recent changes haven’t increased our ranking.

But providing access to justice doesn’t need to be complicated. It can be as simple as not charging defendants exorbitant fees and answering the phone. And I call on courts to do just that for the sake of consumers.

George Simons is co-founder and CEO of SoloSuit, a software company whose product helps guide individuals sued for debt. The software used by SoloSuit was initially developed by LawX, the legal design lab at Brigham Young University Law School.