President ’s administration has one last blockbuster showdown at the Supreme Court over his divisive immigration policies, and this one goes to the heart of how U.S. political power is allocated.

In an argument set for Monday, the administration will seek the right to exclude undocumented immigrants from the census count used to divvy up congressional seats and federal funds. The move would change more than two centuries of practice in a nation that has always counted non-citizen residents, even those in the U.S. illegally.

The administration is racing to finish the count, and submit a report to Congress, before is inaugurated to succeed Trump on Jan. 20. Critics say Trump is trying to manipulate the numbers at the expense of Democratic-leaning areas with high immigrant populations. The push could mean fewer seats for Texas, California and possibly New York and New Jersey.

“This case is about the basic constitutional requirements for how political representation is divided in this country,” said , an American Civil Liberties Union lawyer who will argue against the Trump plan on Monday. “For 230 years, it’s been on the basis of people living in each state, and what the administration wants to do is a radical departure from that.”

Since 2018, the court has Trump’s restrictions on travel from several predominantly Muslim countries, his addition of a citizenship question to the census and him from rescinding the DACA deferred-deportation program. The justices also let Trump asylum applicants to wait in Mexico and cleared him to use Pentagon funds to build fencing along the Mexican border.

The court has put the latest census case on a fast track, making a ruling possible by the end of the year. But the challenge is just one of several hurdles Trump will have to overcome to accomplish his goal.

With the pandemic slowing the count, Census Bureau officials have told the Commerce Department they can’t produce the state population totals until after Trump leaves office, the New York Times reported last week. And even if Trump can send Congress the numbers, lawmakers could still reject the tally, and Biden might be able to submit a revised report after he becomes president.

Still, the focus next week will be the Supreme Court, as Trump tries to take advantage of the 6-3 conservative majority he helped create. The president is defending his July 21 memorandum making it administration policy to exclude undocumented immigrants from the count. The memo tells the Commerce secretary to send the president a tally that excludes that group, along with a separate set of numbers showing the total population.

Current federal law requires the Commerce secretary to send the census figures to the president by Dec. 31, and the president to send Congress the numbers for allocating House seats by Jan. 10.

Three lower courts around the country have said the Trump policy violates either the Constitution or federal statutes. In the case directly before the justices, a three-judge panel in New York said the plan runs afoul of the U.S. Census Act, which requires the Commerce secretary to show the “tabulation of total population by states” and says the president must give Congress “the whole numbers of persons in each state.”

Critics of the Trump push say those words leave no room for interpretation. That’s an argument that could resonate with Trump’s three Supreme Court appointees -- , and -- all of whom advocate interpreting laws strictly according to their text.

“It’s difficult to know how Congress could have been any more plain than they already were unless they put in parentheses ‘and we really mean it,’” said Justin Levitt, a law professor at Loyola Law School in Los Angeles. 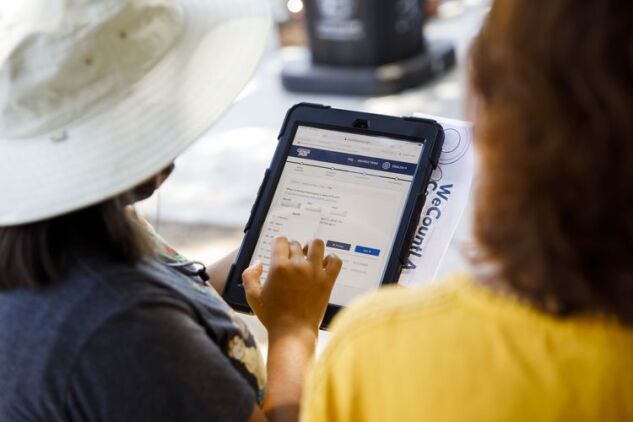 The Trump administration contends the laws leave room for the president to exclude people who are in the country illegally. The administration’s top Supreme Court lawyer, acting U.S. Solicitor General , argued in court papers that the phrase “persons in each state” means “inhabitants,” a term whose application requires the use of judgment.

“The president need not treat all illegal aliens as ‘inhabitants’ of the states and thereby allow their defiance of federal law to distort the allocation of the people’s representatives,” Wall argued.

Supporters of the president’s effort say his approach is long overdue.

The administration must also defend against contentions that the plan is unconstitutional. In a separate case in California, a court said Trump was violating a constitutional provision that requires congressional seats to be apportioned according to the “whole number of persons in each state.”

The Trump memo is being challenged by states led by New York and advocacy groups represented by the ACLU. Their biggest obstacle at the Supreme Court is likely to be a procedural one: Trump’s contention that they don’t currently have “standing” to challenge the plan because they lack a legal stake in the outcome.Trump’s contention that they don’t currently have legal “standing” to challenge the plan.

In letting the suit go forward, the three-judge panel said the plan to exclude undocumented immigrants could chill participation in the census. But with the survey now complete, that argument for standing is questionable at best. And the Trump administration says any impact on congressional apportionment is too speculative at this stage to allow a lawsuit.

“Whether the memorandum will result in the exclusion of a number of illegal aliens sufficient to impact apportionment is unknown,” Wall argued. “The executive branch thus should be allowed to implement the memorandum, at which point suit can be brought by any actually injured parties.”

Ho, the ACLU lawyer, called standing “the biggest hurdle” for the challengers. But he pointed to a prediction in the Trump memo that California would lose two or three seats without undocumented immigrants.

“The purpose of the memorandum was to change the way that Congress is apportioned,” Ho said. “It sort of strains credulity for the government to be saying, ‘We don’t know if this is going to change the apportionment.’”