New vapor intrusion guidance from the California Environmental Protection Agency (CalEPA), if finalized without significant changes, will stall some much needed residential development in the state’s many brownfields, Nixon Peabody LLP partner Alison Torbitt and EKI Environment & Water Inc. engineer Deepa Gandhi argue. The CalEPA working group should revisit the practical implementation of the supplemental guidance and seek a middle ground, they say.

California has approximately 200,000 properties with some level of environmental impact from historical uses such as dry cleaners, manufacturing, and old gas stations, generally known as brownfields, and many are within urban areas close to public transportation. Vapor intrusion—when chemical vapors move from the subsurface into a building—can be an issue for these brownfield sites that include volatile chemicals, which can move from their location below ground into the indoor air.

Pre-2019, it was financially feasible for a residential developer to acquire these sites, investigate the historical contamination, and implement some level of corrective measures, including passive mitigation systems for vapor intrusion, to protect the health and safety of future occupants without relying on contribution claims from those that caused or contributed to the contamination.

In 2019, however, the San Francisco Bay Regional Water Quality Control Board implemented conservative environmental screening levels (ESLs) for vapor intrusion. Fast forward to 2021, and in a coordinated effort, California’s environmental agencies are set to issue new guidance on how to implement these ESLs to address vapor intrusion concerns. 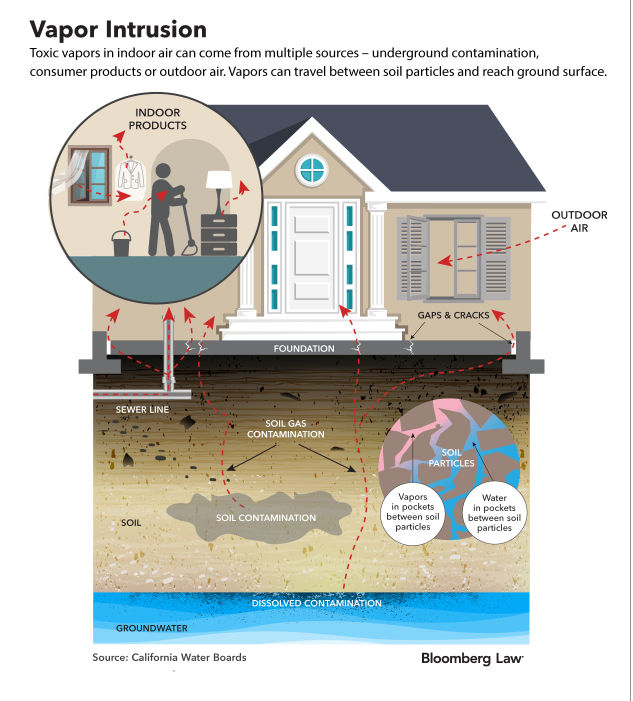 If finalized as-is, California’s approach to vapor intrusion will be one of the most stringent, if not the most stringent, in the country. This is likely to stall, if not financially prohibit, the residential redevelopment of brownfields, particularly in the outskirts of California’s urban centers, despite developers’ protests that this guidance completely contradicts the recognized, state-wide need for more housing, especially affordable housing. This article will discuss the draft guidance released in 2020, with finalization or revisions anticipated for release in spring or summer 2021.

Among the numerous recommendations in the supplemental guidance, one of the most controversial is with respect to attenuation factors, which provide an estimate of how much chemical vapors reduce in concentration as they migrate from the subsurface into the indoor air environment. Generic attenuation factors are used, along with subsurface data, to evaluate if proposed construction can be safely occupied.

With no approved mathematical models, corrective actions for development rely on generic attenuation factors like those proposed in the guidance, or site-specific information collected, which can be expensive and unpredictable, especially when vapor intrusion mitigation system approvals are required at design when there is no “indoor air” yet created.

The U.S. EPA initially developed the generic attenuation factors recommended for statewide implementation in the supplemental guidance based on a criticized data set of sites, the majority of which were outside California. Although set forth as non-binding guidance, the expectation is that the supplemental guidance will be implemented as a requirement, given the lack of resources of the regional and local environmental oversight agencies.

These recommended, ultra-conservative generic attenuation factors prompted outcries by the regulated community, including brownfields developers, as not representative of California climate and geology. Nearly 600 public comments were submitted, some claiming it over-estimates the potential vapor intrusion impacts to occupants by as much as 95% and others stating it implements too conservative of a view—allegedly assuring human health and safety are protected without risk or compromise, while ignoring the practical implications of significantly increased costs, timing delays, and complexities that will result in needed urban housing not being built.

As we await revision or finalization, the supplemental guidance is already being implemented despite the controversy.

Currently, if the screening based on the conservative, guidance-recommended generic attenuation factor analysis indicates a vapor intrusion concern, a developer must make one of two choices:

Either choice is expensive and risky, making residential development on brownfields extremely difficult.

If the supplemental guidance is finalized as-is, it will stall, if not prohibit, residential redevelopment on brownfields, exacerbating the housing shortage and contributing to the continued urban blight of crumbling, abandoned gas stations, auto repair shops, strip malls, and more.

Instead, the CalEPA working group could take this opportunity to revisit the practical implications of the supplemental guidance and wait to adopt less conservative generic attenuation factors, when those based on California-specific conditions are available, allowing residential redevelopment on brownfields to remain both feasible and protective of human health and the environment. There is a middle ground that the supplemental guidance, in its current draft, has yet to find.

Alison Torbitt is a partner at Nixon Peabody LLP in the Energy and Environmental practice group. She assists multiple developers across California, and across the country, to find solutions to historical contamination, as well as financing parties as they work to facilitate these important developments.

Deepa Gandhi is a supervising engineer with more than 20 years of experience specializing in the management of complex sites, the evaluation of environmental data, and litigation support, particularly for property redevelopment.