President Joe Biden has yet to put forward nominees for district courts in California, a state where all four federal trial courts say they’re hamstrung by a growing list of vacancies considered “emergencies.”

The four district court chief judges told Bloomberg Law they’re anxious to get more hands on deck. All 17 of the existing vacancies in California districts are considered “judicial emergencies,” or vacancies that increase the work for the remaining judges. Those vacancies alone account for 46% of the judicial emergencies in the country. Three other district judges are expected to retire soon.

“This crisis of vacancies is more significant to the administration of justice than the pandemic was,” Central District of California Chief Judge Philip Gutierrez said.

California Democratic Sens. Dianne Feinstein and Alex Padilla have forwarded names to the White House, aides to both said without disclosing when or how many names were submitted.

The White House didn’t respond to a request for comment on the status of California nominees.

The lack of any California nominees six months after Biden took office contrasts with how rapidly his administration has approached judicial nominations overall. Biden has nominated 30 people to lifetime judicial appointments with eight confirmed so far.

Some of those nominations targeted other states with judicial emergencies, including Washington and New Jersey.

All four California district chief judges, said they understood that the process takes time, especially in a state with so many vacancies. But filling existing vacancies is only part of what they say their courts need: Each of the California courts also needs more judgeships.

“It’s crushing,” Eastern District of California Chief Judge Kimberly Mueller said of the vacancies. “All I can tell you is that we are hopeful we see nominations soon, such that the vacancies can be filled this year.” 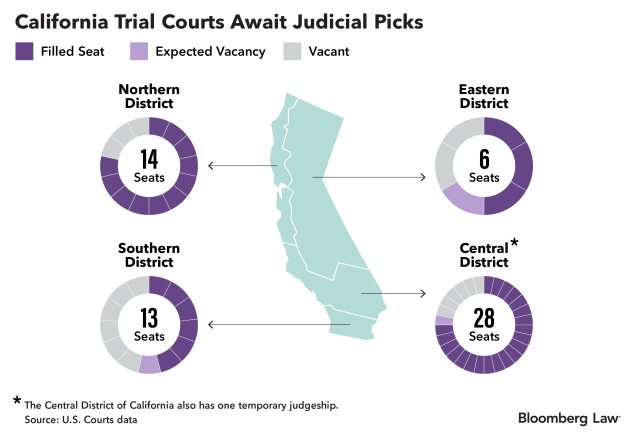 The vacancies are felt most acutely in the Southern District of California, which comprises San Diego and Imperial counties and is bordered by the Pacific Ocean to the west and the Mexican border to the south.

The court is operating with nearly half of its 13-seat bench vacant and expects another vacancy in August. “We’re unique relative to the other three district courts in California because of our proximity to the border and the number of criminal cases we do,” said Southern District of California Chief Judge Dana M. Sabraw.

The court’s 10 senior judges are “the only way we’re staying afloat,” Sabraw said of semi-retired jurists who hear cases. Together, those senior judges carry about 50% of the court’s caseload, he said. “We’re kind of at a pinch point, and we’d love to have some new judges,” Sabraw said.

The state’s other three district courts are also feeling the effects of vacancies.

“It’s almost like when you see the drought maps that afflict our state: We’re all in a drought but some of us are in an even more severe drought,” Northern District of California Chief Judge Richard Seeborg said.

The three vacancies in the Northern District were created earlier this year when three judges took senior status.

Those judges have continued to help lighten the load, Seeborg said, which has been the “salvation” for the court that covers issues arising out of Silicon Valley and leads the country in multidistrict litigation.

In the 27-seat Central District of California, which has six vacancies and one expected vacancy, unfilled seats mean delays. Gutierrez said he had to continue a civil rights case and patent case to do a two-week criminal trial because he can only do one at a time.

“If we had a full complement of judges, I’m certain very few cases would get continued,” Gutierrez said. The Central District of California encompasses Los Angeles and is the most populous federal district court.

The earliest of the California vacancies is from October 2015.

During the Biden transition, now-White House counsel Dana Remus asked senators to send in district court recommendations by Jan. 19 for existing vacancies and within 45 days of any new vacancy being announced. But Padilla, who took the Senate seat of Vice President Kamala Harris, was sworn in Jan. 20, the day Biden took office.

Even when those seats are filled, courts still need more judges.

The judiciary’s policymaking arm, the Judicial Conference, recently recommended to Congress that California district courts get 30 judgeships. Despite requests from the judiciary, Congress hasn’t passed a comprehensive judgeship bill in 30 years.

“We also remain hopeful that a district judgeship bill will emerge at some point,” Mueller said.

In March, Rep. Hank Johnson (D-Ga.), chair of the House Judiciary’s subcommittee that oversees the courts, said he planned to introduce a bill to add lower court judgeships. A spokesman said Johnson is assessing whether the number of judgeships requested is sufficient.

The vacancies are “the lowest hanging fruit,” said Mueller. But given the population growth in the sprawling Eastern District, “unless or until we get those additional judgeships too, we will labor under a very heavy burden.”