A wide range of federal contractors stand to benefit from a new Federal Circuit ruling on the origins of a hepatitis drug, which could allow them to rely more on foreign-made parts or components while still satisfying “Buy American” restrictions.

“A number of companies with overseas supply chains could benefit from the decision, as long as the regulation remains unchanged, including companies that use IT components, medical device companies, and those that manufacture tools and equipment,” said Alan W.H. Gourley of Crowell & Moring LLP in Washington.

Federal agencies may only purchase articles produced in the U.S. under the Buy American Act. The Trade Agreements Act (TAA) provides exceptions, allowing the president to identify designated countries that can provide goods sold to agencies. India and China, two of the world’s largest product suppliers, aren’t among them.

But the ability of companies with overseas supply chains to provide “American” products just got easier with the Feb. 10 ruling by the U.S. Court of Appeals for the Federal Circuit.

A hepatitis drug made by Acetris Health LLC is a U.S.-made end product, the court said, and should have been considered for a government contract with the Department of Veterans Affairs, even though the active pharmaceutical ingredient comes from India.

The pill is the product, which is assembled in a New Jersey factory, the court said. It therefore satisfies the Federal Acquisition Regulation (FAR) and the TAA.

The decision is “ground moving,” and “constitutes a major expansion for what companies can say is TAA-compliant,” Gourley said. 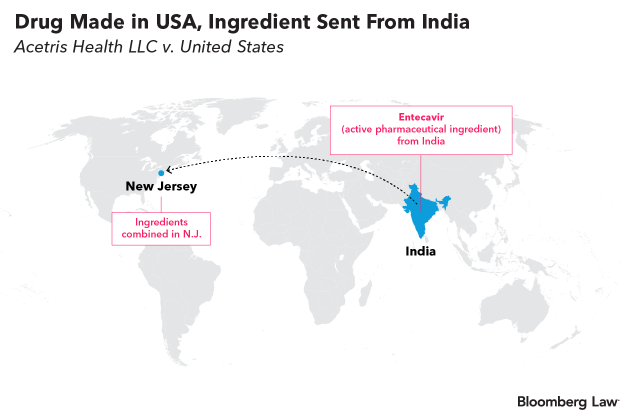 “Companies may now be able to satisfy the TAA by merely conducting screwdriver operations—bringing in components from foreign countries and assembling them in the U.S.,” he said.

Other attorneys who represent federal contractors agree about the decision’s potential to apply broadly.

“I’m sure there are many manufacturers who have just seen their products become TAA-compliant overnight because of this ruling,” said Jon Williams of PilieroMazza PLLC in Washington.

While the Federal Circuit noted that the White House should change the FAR if it is “dissatisfied” with the expansion of what it means to “Buy American” under its decision, Gourley said the administration hasn’t acted in recent years on other efforts to narrow the term’s designation.

“There could be pressure to change the FAR rule if the Trump administration appreciates how broadly the decision opens the door for satisfying the U.S.-made end product definition,” Gourley said. “Then again, we’ve heard ‘America First’ for four years and they haven’t made modifications that could make it more difficult to satisfy the Buy American Act and Trade Agreements Act.”

In the Federal Circuit case, Acetris Health sued after the VA decided that its drug had an active pharmaceutical ingredient—entecavir—from India, and couldn’t be part of a contract competition.

By siding with Acetris, the Federal Circuit effectively overruled U.S. Customs and Border Protection, which had held that Acetris’ product was a product of India because of the source of the its active ingredient.

Acetris’ drug wasn’t wholly manufactured in India, and the drug’s components weren’t substantially transformed into tablet form in India, the appeals court said. Acetris’ drug was a U.S.-made end product under the FAR, which looks to whether ingredients are measured, weighed, mixed and compounded in the U.S., the court said.

Those companies should be very careful about their existing and future certifications, he said.

The ruling’s impact could extend well beyond the drug industry. Contractors more generally that manufacture end products in the U.S. may no longer need to be concerned that foreign components of their deliverable will disallow them from certifying compliance with the FAR trade agreement provisions, said Kristi Morgan Aronica of Weitz Morgan PLLC in Austin, Texas.

“Strictly read, the court’s holding applies to pharmaceuticals, but it also creates a highly defensible position for offerors and contractors who produce a different type of deliverable in the U.S. to expand their supply chain for components of the product to countries outside of those listed in the FAR as approved countries,” she said.

She agreed that IT and medical device companies could be the biggest benefactors of the decision, adding that furniture and office products companies could significantly benefit too.

Aronica cautioned, however, that other rules, including the FAR provision on counterfeit parts could dissuade contractors from relying on parts from non-TAA compliant countries.

That rule requires contractors to inform the government within 60 days of a counterfeit or suspected counterfeit part.

The court’s decision also could create an opening for other industries like electronics to make more use of foreign parts and stay TAA-compliant, said Curtis M. Dombek of Sheppard Mullin Richter & Hampton LLP, who practices in Los Angeles and Brussels.

He also said how much of a product needs to be made, or assembled, in the U.S. for a product to qualify as American made, is now up for debate.

“An interesting question, which could be the subject of significant litigation, is whether the interpretation adopted in the decision would allow an already functional electronics item, like a computer circuit board with CPU, to be brought into the U.S. and have other simpler components like power supply and a monitor attached, with the resulting laptop treated as a U.S.-made end product,” Dombek said.