A view of the jury box of a courtroom.
Photographer: Robyn Beck/AFP/Getty Images

State courts could face major changes in the way criminal charges are brought and how they deal with civil claims if the U.S. Supreme Court overrules its own cases limiting the reach of the Bill of Rights.

Most of the Bill of Rights already applies to the states. But there are a handful of guarantees that don’t, including a provision requiring felony charges be brought by a grand jury, and one guaranteeing the right to jury trials for civil cases involving $20 or more.

At oral argument Nov. 28 in an Indiana excessive fines case, some of the justices suggested it may be time to act on that issue.

Here “we are in 2018 still litigating incorporation of the Bill of Rights. Really? Come on,” Justice Neil M. Gorsuch asked Indiana’s attorney, who was advocating for limiting the scope of the excessive fines clause.

And Justice Brett Kavanaugh chimed in.

“Isn’t it just too late in the day to argue that any of the Bill of Rights is not incorporated?” he asked.

That would be a pretty “dramatic change,” Lawrence Rosenthal, of Chapman University Fowler School of Law in Orange, Calif., told Bloomberg Law.

Rosenthal authored the sole amicus, or friend-of-the-court, brief supporting Indiana on behalf of the National Association of Counties, the National League of Cities, the U.S. Conference of Mayors, and others in the case involving state seizure of a $40,000 in a civil action following a drug conviction.

The defendant in that case, Tyson Timbs, argues that forfeiting the car far exceeded any fine he would’ve been subjected to. Timbs has a number of supporters, including the ACLU and the U.S. Chamber of Commerce. A ruling is expected by the end of June.

There are only two rights the the Supreme Court has not yet addressed whether they are incorporated to the states or not—the excessive fines right at issue in the Indiana case and the Third Amendment’s protection against quartering of soldiers.

But there are three rights that the high court has expressly refused to apply to the states—the right to a grand jury indictment, the right to a jury in civil trials, and the requirement of jury unanimity in criminal cases. 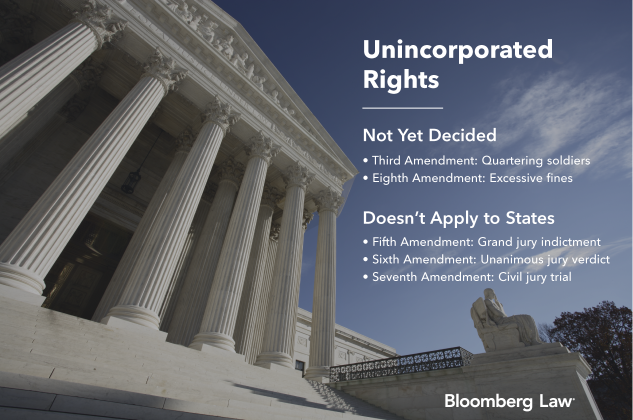 Those decisions were made before the court’s modern approach to incorporation had been developed, the court said in its 2010 incorporation decision, McDonald v. Chicago.

As such, they are “anomalous” decisions that if they were to come before the Supreme Court today might come out the other way, the attorney arguing in favor of incorporation in the Nov. 28 argument told the justices.

Doing so would be disruptive, Rosenthal said.

In McDonald, the Supreme Court noted that most states “do not require a grand jury indictment in all felony cases, and many have no grand juries” at all.

Only 17 states required a grand jury indictment for all felonies as of 2004, the last time statistics on grand juries were published by the Bureau of Justice Statistics.

Instead, most states allow felony charges to be brought by a prosecutor, with later review by a judge, Rosenthal said.

Requiring grand jury indictments for all felonies is actually something that neither prosecutors nor defense attorneys want, he said.

It’s more burdensome for prosecutors and defense attorneys don’t view the grand jury as an adequate check on frivolous prosecutions, Rosenthal said. A grand jury would indict a ham sandwich at the request of a prosecutor, the old adage goes.

Requiring states to comply with the requirement for civil—as opposed to criminal—juries, too, would be a significant change, Rosenthal said.

Anyone who watches “Judge Judy” knows that states use small claims courts to quickly adjudicate relatively small-dollar disputes, he said.

One benefit of those special courts is their swift time frame.

But if states were required to offer juries in most civil cases, that would grind things to a halt in small claims courts, Rosenthal said.