A view of the U.S. Capitol from the U.S. Supreme Court.
Photographer: Craig Hudson/Bloomberg via Getty Images

Stephen Breyer has served on the U.S. Supreme Court for almost three decades, but he has said the best job he ever had was in the Senate, working for Edward Kennedy.

Breyer’s stint as the Judiciary Committee’s chief counsel 15 years before joining the high court in 1994 influenced how he has worked with fellow justices and approached cases, those who follow the court and know Breyer said.

“Justice Breyer’s departure from the Court risks loss of a powerful voice for a fulsome, nuanced, contextual approach to interpreting statutes,” said Dakota Rudesill, an Ohio State University Moritz College of Law professor who has studied how legislative experience can benefit the legal profession.

Breyer, who is retiring, according to a person familiar with the justice’s thinking, was a Harvard Law professor nearly 50 years ago, teaching administrative law, when Kennedy became chair of the subcommittee on administrative practices and procedures.

After a private dinner at the Massachusetts Democrat’s home, Kennedy hired Breyer, who worked on airline deregulation as special counsel to the committee from 1974-75. He returned as chief counsel from 1979-80.

“He was as effective and beloved a chief counsel as anyone ever was in the U.S. Senate,” said Kenneth Feinberg, a high-profile mediator who worked for Kennedy alongside Breyer.

“We would arrive early, leave late and find every hour there interesting,” Breyer said in a 2011 speech about working for Kennedy, who died in 2009. “I wish I could convey the excitement of working there.”

The experience stayed with Breyer long after he left Capitol Hill for the Massachusetts-based U.S. Court of Appeals for the First Circuit and then the Supreme Court as a Bill Clinton appointee.

His 2014-15 clerks gave him a mug that listed six key lessons Breyer learned during his time in the Senate, including “keep it simple” and “the perfect is the enemy of the good.”

“So you can safely say that it was a foundational period in his development as a human and as a jurist,” said O’Melveny & Myers counsel Kendall Turner, who clerked for Breyer that term. 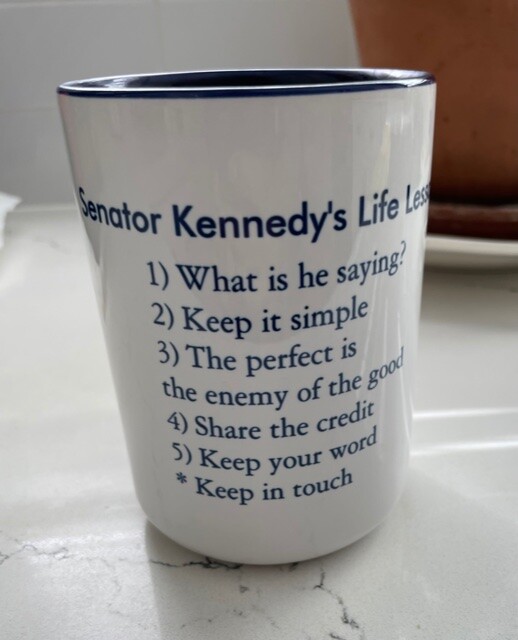 Mug given to Justice Stephen Breyer by his law clerks.
Kendall Turner.

Breyer was still talking in recent years’ oral arguments about “when I used to work there” in reference to the Senate. He raised concerns at the November 2020 Obamacare argument that striking down the Affordable Care Act could lead to striking down a host of other laws, too. He authored the June 17 decision rejecting the latest challenge to the law.

“I think there will be an awful lot of language in an awful lot of statutes that will suddenly be the subject of Court constitutional challenge,” Breyer said at the argument in California v. Texas.

Among the few federal judges who have worked for a legislative body, Breyer embraced the use of legislative history to interpret laws, Rudesill said.

Breyer dueled on the issue with Justice Antonin Scalia, who championed the textualist approach that shuns legislative intent. Textualists say they prefer to stick with what’s printed on the page.

Trisha Anderson, who’s now a Justice Department lawyer, said during an interview when she was a partner in the law firm Covington & Burling that the influence of Breyer’s work in the Senate is most evident in his separation-of-powers opinions.

“His time on the Hill afforded him some real insight into not just how things work on the Hill but how the branches work together,” said Anderson, who clerked for Justice Elena Kagan during the 2010-11 term.

“And so you do see a theme throughout his opinions about how especially the legislative branch and the executive branch work together,” she said.

Anderson pointed to Breyer’s dissent from the court’s 2010 opinion in Free Enterprise Fund v. PCAOB, where the majority struck down a law that said the Securities and Exchange Commission can remove members of the Public Company Accounting Oversight Board from office only for cause.

He was in the majority more than any other justice that 2014-15 term, Turner recalled.

“His willingness to collaborate and keep an open mind helped him be in that role,” she said. “Interpersonally, he functions as this very important institutional glue at the court. Everyone at the court is always happy to talk to him.”

It was an approach he learned on Kennedy’s staff.

“When disagreements arose, he’d tell us just what to do. ‘Work it out,’ he’d say. ‘It’s always possible,’” Breyer said at a December 2008 Harvard event honoring Kennedy.

Breyer has demonstrated the value of having justices with experience as a top Senate aide—or governor, senator, or congressman, Feinberg said.

“That discipline, that school of thought, that habit of thinking is an important element that ought to be rejuvenated in terms of nominees,” Feinberg said.