President Donald Trump’s push to reshape the federal judiciary with conservatives is likely to slow in 2020 as most of the remaining vacancies are in California and other blue states.

That means this year—an election year when there’s already much less time to get things done in the bitterly divided chamber with a third of seats up for election in November—the White House will have to work with Democratic senators to get judges confirmed that they can agree on or possibly accept a lower yield on one of Trump’s most successful priorities.

In the short term, however, there’s no slowing down for the Republican-led Senate. Minutes after lawmakers acquitted Trump on two articles of impeachment Feb. 5, Majority Leader Mitch McConnell (R-Ky) reignited judicial nominations work. He teed up five nominees for votes this week.

If they’re confirmed, it will leave the White House and its Republican Senate allies with just one conservative appeals court seat and 10 red-state district court vacancies that are either current or anticipated. Most of the judges Trump appointed in his first three years in office were states friendly to Republicans.

The makeup of the remaining vacancies could play into Democrats’ hands. Senators still have a say over who gets nominated to district, or trial, courts in their state, and Democrats could leverage that custom during an election year with the prospect of more favorable nominees on the horizon.

“If the Democratic senators think they have a chance at taking back the White House, there’s less incentive to approve any of Trump’s judges, particularly if Trump is not working with them to find candidates that are amenable to them,” said Rorie Solberg, a political science professor at Oregon State University who researches and writes about judicial nominations.

“It’s the same calculation that Mitch McConnell made about holding Scalia’s seat open so Obama couldn’t fill a seat on the Supreme Court,” Solberg said, referencing the Republican effort to block Barack Obama’s pick to fill Justice Antonin Scalia’s seat after his death less than a year before the 2016 election. 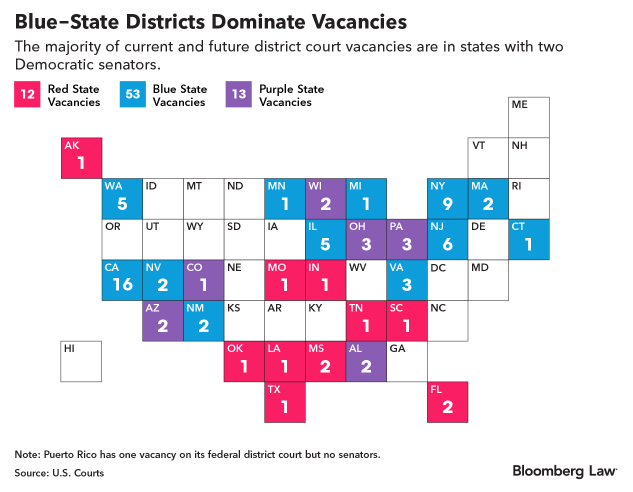 Republicans may have other moves to make. They could employ strategies to get more judges to take a form of semi-retirement known as “senior status” to create more district and appeals court vacancies in areas to their liking and maintain the flow of judicial appointments pleasing to conservative voters.

“I think the message that needs to get out to Republican-appointed judges is ‘you have a short window of opportunity here to go senior or retire if you care about your replacement,’” said Mike Davis, president and founder of the conservative judicial advocacy group Article III Project. He believes Trump will win reelection and notes the strategy is a precaution.

When it comes to getting the blue-state vacancies filled, Davis said, personal diplomacy from Judiciary Committee Chairman Lindsey Graham, a South Carolina Republican, will be crucial. Davis worked on nominations for former Republican chairman of the Judiciary Committee Sen. Chuck Grassley (Iowa).

In an effort to make good on his 2016 campaign promise, Trump has worked with McConnell to reshape the judiciary with conservatives. So far, those efforts have resulted in 183 appointees to district and appeals courts and two justices on the Supreme Court, Brett Kavanaugh and Neil Gorsuch.

Much of that focus has been on appointees to district courts in red states and appeals courts, which the administration can fill with fewer hurdles due to a change in a Senate practice.

Confirmation of appeals court judges was made easier for the White House when Grassley, while Judiciary chairman, stopped a practice where senators could prevent a nominee from moving through the process by not returning a paper known as a “blue slip.”

Blue slips were a courtesy “meant to encourage pre-nomination consultation, not vest a senator with the power to block a nominee for political or ideological reasons,” Grassley said in 2018.

Needing blue slips returned from both senators to move a nominee forward, however, is still in place for district court nominees. There are many more district judges compared with circuit court seats.

But according to a recent report by Brookings Institution fellow Russell Wheeler, blue-state nominees face major delays from nomination to confirmation, after senators have given their stamp of approval.

While there might other dynamics going on that aren’t apparent, “on the face of it, it really looks like ‘we’re going to put our guys first,’” Wheeler said, referring a recent report looking at the first three years of judicial confirmations under Trump. 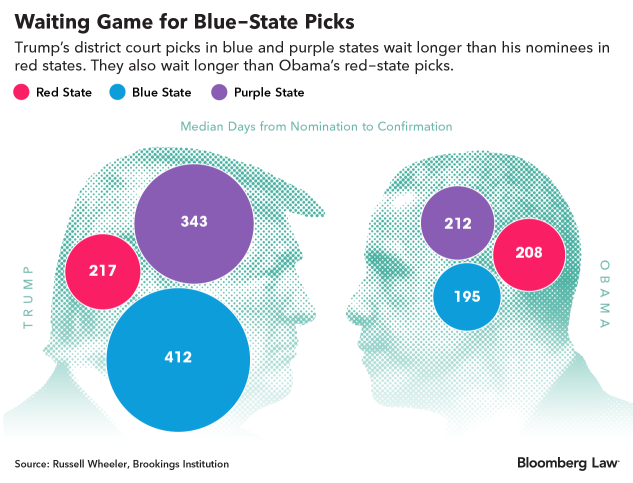 “I do get the impression that the administration is negotiating with Democratic senators,” Wheeler said. “But it’s one thing to get them nominated, and it’s another to get McConnell to push them to the front of the line.”

Conservatives say that delay is a result of Democratic obstruction of the process.

“In my opinion, Democrats have been creating those conflicts by objecting to nominees more than they would otherwise because it’s Trump,” said Thomas Jipping, who worked on nominations for former Utah Sen. Orrin Hatch when he was the Republican chair of the Judiciary Committee.

Jipping is deputy director of the Edwin Meese III Center for Legal and Judicial Studies at the conservative Heritage Foundation.

In the end, all roads lead back to the White House where the nomination begins.

Carl Tobias, a law professor at the University of Richmond, said those consultations have varied by state. In states where the White House has worked with Democratic senators, like Illinois, nominees have gone through, Tobias said. Illinois has three Trump-appointed district court judges with more in the pipeline.

But in others, like California, nominees have lagged. The Senate hasn’t confirmed any Trump district court nominees in California, despite requests from federal courts in the state to fill their vacancies without delay.

When it comes to consultations with blue states more generally, Tobias said, “I don’t think the White House has tried very hard.”